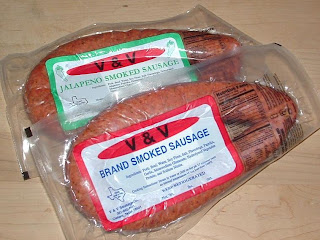 I first ‘discovered’ V & V smoked sausage several years ago at Pizzitola’s Barbecue on North Shepherd in Houston. I thought their sausage was the best thing they served and it comes from V & V in beautiful Cistern, Texas.

Shortly thereafter I stopped off at the V & V plant in Cistern on a trip to Central Texas. The ladies in the office were very nice and went into the plant and came back with a couple of packages of their sausages right off the line. They make only two varieties, a beef and pork and beef and pork with jalapeno. The recipe is an old Czech family recipe although the modern formulation includes textured vegetable protein and soy flour which gives the sausage a smoother texture than most sausages. They use natural casings.

V & V is carried by some of the larger HEB stores in the Houston area; you have to look for it, though, because, with only two varieties, they aren’t allotted a lot of shelf space like some of the other brands.

Pizzitola's
Posted by Bruce at 1:57 AM

Years ago, when Hwy 71 to Austin was being rebuilt, I used to drive down to Flatonia and take Hwy 95 north to Smithville just to avoid the mess. I'd stop in what I thought was Flatonia for this terrific Texas country sausage. Until I realized that Cistern is a suburb of Flatonia, I thought maybe I knew of a sausage place that you didn't. Shoulda known better. I'm happy to hear that some of the HEB's carry it. I'll be on the lookout. Thanks.

I used to get it at the HEB on Beechnut at the Beltway on the west side but I haven't been to that store in a couple of years.

I got those at the little bar/convenience store right across from the V & V plant and the lady said they have a truck that goes to Houston so there should be some here somewhere.

Strangely, HEB in Laredo, Tx carries it and hasn't dropped it from inventory (thank you!). Best sausage ever. It comes in the big horseshoe links and the smaller 4" multiple-link packaging

I also believe that it is V&V sausage being oak smoked at the local Rudy's BBQ. I don't know if the original Rudy's carries it.

I consider V&V to be just about the best Teas sacsage on the shelves, Wonderful texture, juicey always tasty and well packages,,,And my PO is in Elgin....Cistern is only about 45 miles away.