Most of my meals in Fort Collins were taken with relatives and I ate very well but I had done some research in case I had time to grab a meal or two on my own.  Not surprisingly I found Chinese, Vietnamese and Thai but also an Afghan kabob place, Ethiopian and Nepalese.  Not bad for a college town the size of Fort Collins known mostly for it's craft brewing scene. 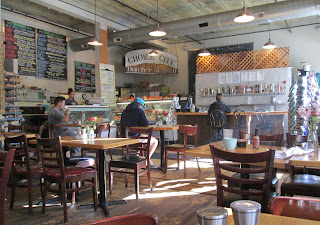 As interesting as those sounded at the top of my list of places to try was Choice City Butcher and Deli, right downtown.  And at the top of the menu for me..... 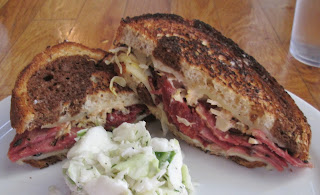 the Colorado Corned Buffalo Reuben, one of five Reuben variations they offer, dressed with sauerkraut, homemade Thousand Island dressing, and Swiss cheese, grilled on rye bread.  This is the half order and was a perfect size for me; a whole order has more meat on it.

I had arrived almost an hour early for lunch, the result of my never having adjusted the clock on the dashboard, but the wait was worth it (well, when I realized the delay was my fault and not just very slow service).  The Reuben is one of the greatest culinary inventions of all time and this was a very good version and one of the best treatments of buffalo I can ever remember having.  The bright and fresh homemade Thousand Island dressing upended a couple of decades of disdain on my part for that style of dressing. A kosher dill pickle spear, a classic accompaniment, added to the enjoyment; the Lemon Dill Cole Slaw was just okay.

As I was researching places to eat when I briefly passed through Denver, Tocabe was the second place I found and it marked the end of my search.  I only expected to have at most two meals in Denver and probably only one.  I never got to go to Biker Jim's Gourmet Dogs, the first place I found, so  I never got to taste the Alaskan Reindeer Dog or the Jack-A-Lope dog, said to be mythically delicious. 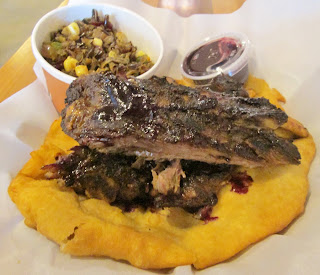 As alluring as those dogs sounded, the Bison Ribs and Fry Bread at Tocabe were calling my name more insistently.  I chose a hotel right there in Greenwood Village for my overnight stay, just so I'd be close by.

When I was a kid my family traveled across the southwest several times on the way to visit relatives up and down the west coast.  We stopped at Navaho Curio shops but never experienced even Fry Bread (actually, mostly we cooked our own food on a Coleman camp stove as we camped out often.  Finding reliable roadside eats was a lot harder when I was a kid than it is now).  So eating American Indian food at Tocabe was a first for me.

I expected hulking ribs but they were not large; there was a lot of meat on them.  (There's a better picture on the website).  They are apparently braised and then finished on a grill.  Bison is a very lean meat, of course, and the ribs were very well done but not to the falling-off-the-bone stage.  The seasonal berry (blueberry) barbecue sauce that accompanied the ribs helped, but I missed the juicy fat of pork or beef ribs.  I had no trouble finishing all three ribs I was served and the barbecue sauce was also good for dipping the Fry Bread.

As for fried bread - but of course.  Fry Bread makes every thing better.

For a side I went with their rice.  It's not listed on the online menu and I can't remember if it was called Indian Wild Rice or just Wild Rice on the menu board.  It's a black rice with kernel corn, diced red onion and a berry or grape for sweetness.  It wasn't tart enough for cranberry but I couldn't decide if it was a kind of cherry or red grape.  But it was delicious.  According to this article they use Red Lakes Nation rice from Minnesota.  That article and this one reveal more of their ingredient sources, too.

The eatery has been compared to Chipotle.  Never having been inside a Chipotle I'm not positive what the comparison is but I think it has mostly to do with the service line, where you pick all the toppings you want on your Indian Tacos.  They have 2 locations and a mobile unit now.  If there is to be another Denver chain make it to Houston, I hope it's this one. 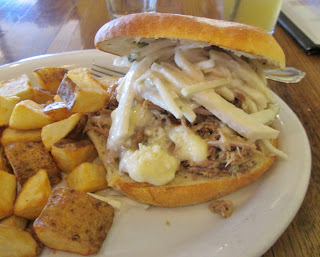 This was another recommendation by a poster on Hungry Onion.  I really wanted to try some Green Chile Stew during my brief pass through New Mexico but I just couldn't pass up the signature sandwich at this farm-to-table restaurant.  It's called the New Mexican on the menu, green chile rubbed and smoked pulled pork served on a bun baked by  Dr. Field Goods Bakery, Butcher Shop and Deli, about 50 paces away in the same shopping center, topped with sharp cheddar, green chile and apple jicama slaw, served with Field Good potatoes.  After just one bite I began to regret I wasn't going to be staying around to sample a lot more of this menu.  This was an excellent sandwich.

I also had the house made ginger ale - muddled ginger, fresh squeezed lemon juice, simple syrup and soda water.  It was a bit on the sweet side for me.

I'm sure if I lived in Santa Fe, or visited often, I'd spend a lot of time here and at the companion shop just down the way.

Santa Fe bills itself as a very friendly city and I certainly experienced that here and at Plaza Cafe.

Dr. Field Goods
Posted by Bruce at 1:06 PM No comments:

I was a tourist in Santa Fe and I wanted to do what tourists do - eat typical New Mexican fare, like a Green Chile Cheeseburger.  There are lots of contenders but a poster on Hungry Onion had recommended Plaza Cafe Southside and since it was near my hotel, I opted for it. 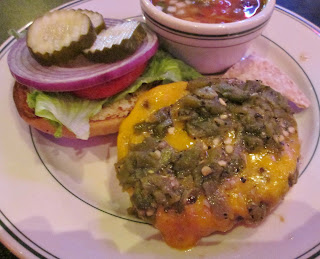 The original Plaza Cafe still operates in Old Town Santa Fe but this new location is said to be more popular with locals, for obvious reasons.  New Mexico grass-fed beef with sharp cheddar cheese and Hatch chiles - excellent.  I opted for the small (6 oz) burger.  It arrived a little over-cooked (I had requested medium rare) but was good nonetheless. 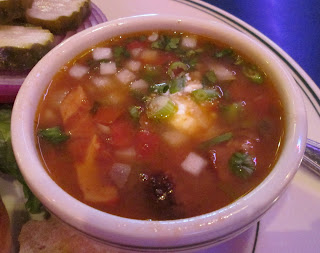 For a side I opted for the Charro Bean Soup.  A little more complex than the charro beans you'd get at a taco truck in Houston and very good.

Too bad I didn't have enough time in Santa Fe to try a few of the other contenders.