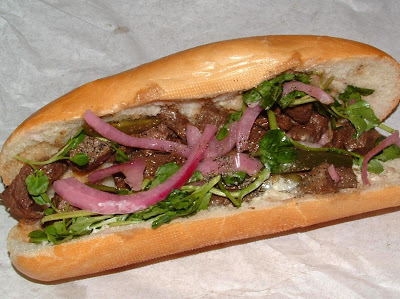 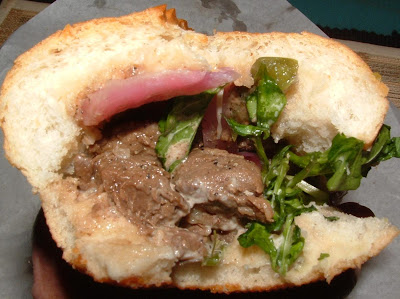 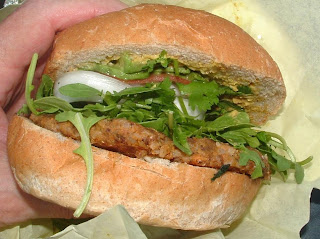 I first wandered in to Supermercado Teloloapan # 9 on a whim. I was headed to Restaurant Dona Tere in the same shopping center and decided at the last minute I wanted to just grab something and go. It’s a new and rather small supermercado with a shiny taqueria area with stand-up stainless steel eating counters. There was no menu posted but the lady pointed to the various meats. I took the best looking one, a chuleta plate, basically a Mexican version of smothered pork chops with tomato, onion, peppers and chiles. It was very good. The beans (pintos?) were also very good, prepared very simply. I usually dread seeing Mexican rice on a plate because it’s so often dry and flavorless but this was very moist and full of flavor. 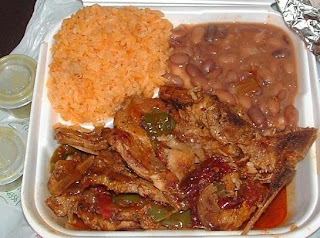 Given my current calorie counting regimen (and shrinking appetite) this was almost enough for two meals. After putting the leftovers away I was stuffing the bag in the trash and noticed the listings of the other 8 locations of the chain and the words ‘cabrito estilo Guerrero fines de semana.’ This I had to check out.

Teloloapan is a municipality in the Tierra Caliente region of Guerrero I found out but I was unable to find anything about how cabrito is done there except one reference on mexicodirect.com to ‘barbacoa - barbecued goat.’ It would take me four more visits to this location (the newest one) and the older one on Chimney Rock before I ever got to try the cabrito.

In the meantime, I had some so-so al pastor and good carnitas at the Chimney Rock location and disappointing carnitas at the Beechnut store. I never again got beans like those pictured. At the Chimney Rock store the beans are not just mashed or pureed, they’re liquified and runny and quite oily sometimes. The rice served there is arroz con vegetales, sometimes plain white rice sometimes Mexican rice, good either way. 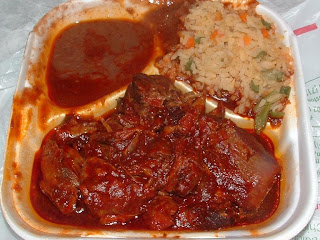 Finally I hit them on a Saturday though the girl had to point out the cabrito for me as it didn’t look like what I expected. In fact it looked rather like chili except for the size of the chunks of meat. This, like the chuleta, smelled great on the way home. It was apparent both aromatically and visually the meat had been charred before being stewed and it was falling apart tender and pretty good - there’s a little ancho in there but not much. It wasn’t quite as interesting as I had hoped.

On my last visit to the Chimney Rock store I also saw some other interesting offerings - two shrimp dishes, one wrapped in bacon, fried fish filets and whole fish, probably both tilapia, and machitos according to the girl. The Wiki article says these are intestines of ‘various farm animals.’ I’ll have to try those, too.

Edit: I missed the Rodeo Parade Saturday morning but was watching the rerun on 13 Sunday night and saw a Supermercado Teloloapan float coming down the street. The announcer said something about them having the most flavorful fajitas in town. Now I know that copy is bought and paid for but I'll have to try them I guess. As I recall they looked pretty good.

I'm not a fan of the current fashion in burgers, so stacked up with condiments and toppings and looking like you'll need 3 hands to pick them up. Fortunately, Bernie's offers some miniburgers that are just the ticket for me. 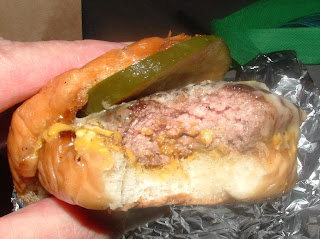 This is the Pre-Schooler - 3 oz. of Black Angus, mustard, ketchup, Texas cheddar and a bread and butter pickle on a locally baked bun. Bernie's makes all their own condiments and the standouts on this are the ketchup and pickle. The buns are made to hold up to the very juicy full-sized burgers and are a little too chewy, perhaps, for these smaller bites.
Posted by Bruce at 10:42 PM No comments: 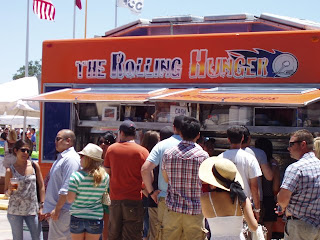 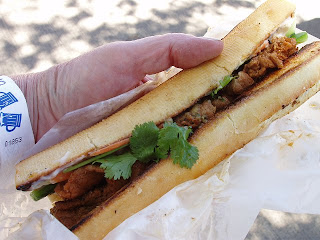 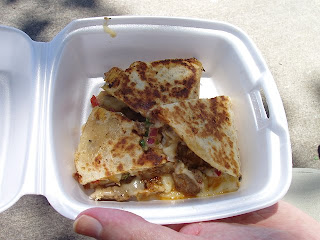 Fusion Quesadilla. These three pics taken at the Haute Wheels Houston event in May, 2011. 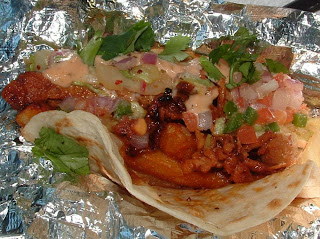 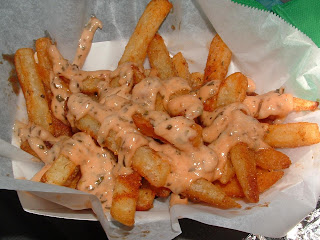 The Rolling Hunger
Posted by Bruce at 10:42 PM No comments: 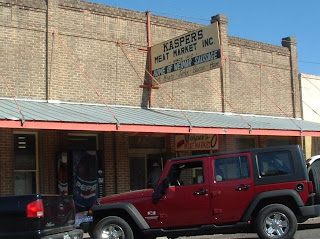 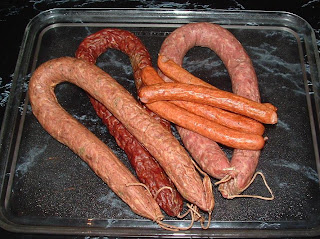 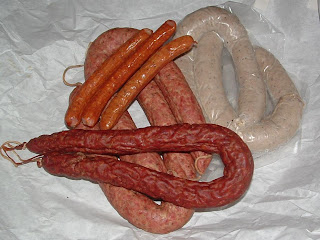 There’s was also a Bob’s Cookshack on W. Main that was open, serving barbecue and other items, another place to eat in beautiful downtown Weimar.
Posted by Bruce at 6:44 PM 8 comments: