This is a former location of The Russian General Store. It’s a larger store physically but there’s a smaller selection of meats and cheeses, some pre-sliced and in vacu-paks and many products that are made in the USA though the labels are in Russian. There is very little English signage so you’re stuck asking lots of questions.

On my first visit some time ago I got some potato salad in the prepared foods department - a very good version of Russian potato salad/Salade Olivier with diced potatoes, carrot, peas, egg, mayonnaise and I believe diced ham. This is a little creamier than the Olivier salad at the Russian General Store which has bologna in it. There were some very good looking breads and I picked up a Russian rye. Given the name of the store I was surprised when the lady told me they didn’t bake them on premises but got them from a local bakery but I couldn’t understand the name of the bakery.

I had some very good lemon meringues, a sugar-free Kvass, and some smoked herring (tinned) on my first visit. On subsequent visits I’ve gotten more of the potato salad and I definitely like this version a little better than the one at RGS or at Phoenicia Specialty Foods. I’ve also had some shortbread like cookies with chocolate cream filling (she just calls all her baked goods pastries) and tried the home-made pickles. These cucumbers in light brine are excellent, with peppers, garlic, celery, 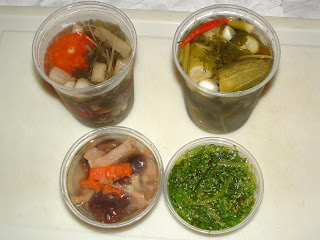 dill, green beans and I think flat-leaf parsley. I’ve also come across a very tough stalk that appears to be a small bamboo stalk. I’ve also tried the tomatoes in light brine which also includes red bell peppers, garlic, celery, parsley and peppers, mushrooms in light brine, and seaweed salad.. The pickles and tomatoes are very reasonably priced but the mushrooms and seaweed are kind of pricey, $5.99 and $6.99 a pound, respectively. All are very good - better than the like products at The Russian General Store - and I’ve become a regular here for the pickles and the potato salad.

The store is on a side-street that does not go through to the major thoroughfare (Chimney Rock) and you’d never find it if you weren’t specifically looking for it. There is a forlorn, tattered folding card table and a couple of folding chairs outside on the sidewalk for al fresco dining but otherwise it’s all to-go. They have a domain name parked at goldengrainhouston.com so maybe someday soon there’ll be a website to peruse and find out more about what they have to offer.

After I had made my purchase on my first trip including the bread and was driving away it hit me what the name of the bakery was that I was hearing as Haulfuhd!
Posted by Bruce at 5:10 PM