I’ve driven through Eagle Lake many times and seen Austin’s BBQ but it had never been open and I had come to the conclusion it had gone out of business since the publication of Robb Walsh’s Legends of Texas Barbecue. But one Saturday last winter as I rolled through town I spied smoke and pulled right in. That was when I first saw the sign on the side of the building, well back from the street, that they’re only open Thursday, Friday and Saturday. 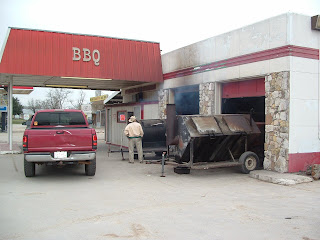 Four days out of the week, Austin’s looks like an abandoned filling station, but on Thursday, Friday and Saturday, they open up the former service bays and roll out these big smokers and get to smoking.

I was not at all hungry but I really wanted to sample some of their wares while I could so I ordered a sliced beef sandwich. It was a very large sandwich on a big, soft, fresh bun; the meat had a 1/8" smoke ring and was tender, juicy and smoky, and the fixings included pickles, onions and sauce. My sandwich could have used a little more meat to fill up that big bun but it was good. There are some tables in a fenced 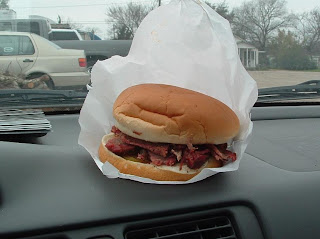 in, covered area on the other side of the building but it was very chilly that day and I ate in the car. In fact every time I’ve been to Austin’s it’s either been miserably rainy or miserably cold and I’ve eaten in the car. There’s barely room inside the building to sidle along between the front wall and the counter to place your order.

Judging great Texas Q by a sliced beef sandwich is a mistake as far as I’m concerned and the only conclusion I drew from my first visit was that Austin’s was good enough to warrant another visit, so a couple of weeks later I made a special trip out to Eagle Lake and got a plate with one of their 2 varieties of potato salad and some beans on the side. I had re-read Walsh’s comments in the meantime and been reminded sausage is their best offering; Walsh also recommends avoiding the sauce but I come from a long line of DIYers and had to sample it for myself.

The brisket had less smoke ring than before but still was above average I’d say, but not really remarkable and it didn’t stand up to the sauce very well. The sauce is very tomato-ey and has the consistency of ketchup and I did not care for it. The potato salad was very good, better than what you get at many Q joints, and obviously home-made; the beans were very basic pintos with no special seasoning and were actually a little underdone so there’s no question they don’t just open up a can and dump these in a pot.

The highlight of the meal was the awesome sausage. I was so enthused by the sausage that I made a note to myself that it was quite possibly second only to Louie Mueller’s in Taylor. That’s very high praise and since I’ve had it several times now I do include it in my Top 4 of sausages at Texas BBQ joints (the list also includes Mueller’s, Black’s, and City Market in Luling). Though the sausage stood up to the sauce okay it would have been much better without it. 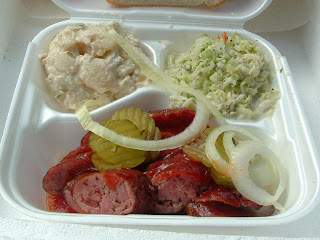 smile to my face not only from the aroma but just the appearance of the food. I knew just by looking at that sausage it was going to be great. The sides included more of the home-made mayo potato salad - note the large chunks of potato - the salad also includes sweet red and green bell peppers and they also have a mustard potato salad. The slaw is of a creamy, sweet variety and I prefer vinegary but this was very good, ice cold and obviously freshly made, the cabbage still good and crisp. Unfortunately they didn’t hear me when I said to hold the sauce but at least the sausage wasn’t swimming in it.

The special of the day on one of my visits was fried catfish and it looked pretty pathetic. A sign on the door on a couple of visits indicates they serve cabrito on occasion but it’s never been available when I’ve been there. I understand they raise their own goats and only occasionally slaughter one.

I brought some of their sausage home after one visit. They make 2 varieties, pork and pork with jalapeno but it’s only partially cooked and I didn’t go to the trouble to get out the smoker to prepare it and it’s not as good as what I had at the joint – it needs more smoke flavor.

Besides their own product, I’ve seen some sausages from Eckermann’s in New Ulm for sale; Eckermann’s is available in some Super WalMarts in the Houston area, Fiesta, Kroger, HEB and Brookshire Brothers are also listed on their website. It’s a pretty decent sausage in it’s own right but it’s no match for Austin’s.

If you’re headed west thru Eagle Lake on US 90A, Austin’s is on your left just before 90A veers off to the left and FM 102 goes straight into the old part of downtown Eagle Lake. On a recent visit I noticed the sign in the window indicates they’re open for a few hours on Wednesday and Sunday around lunch time.