Update: 6/24/10 - there's been a change of ownership, just in the last few weeks, and a new menu that is Mexican. Gone are the Honduran dishes. I may file an updated report.

I have been going to this restaurant for several years off and on and it holds a fond place in my heart because it was one of the first places I ventured into several years ago when I started getting away from reliance on fast food places and a small group of long time favorite haunts. It’s been through a couple of ownership changes since then has always been good but to be honest I’ve found better versions of most of the dishes I liked here at other taquerias - tostadas de cameron, ceviche, enchiladas estilo Altimarano con guilotes (quail), etc. On a recent visit I triedthis with pollo and it too was good, Mexican style enchiladed tortillas topped with shredded cabbage, queso, a little crema, jalapenos en escabeche and avocado with a generous portion of bite sized strips of grilled chicken breast, with some papas fritas on the side. The quantity of cabbage was a little boring without any dressing of any sort but basically it was good.

I discovered on that visit another change of ownership; the business card read Autentica Comida Mexicana y Hondurena bit they were still using the somewhat tattered menus they’ve been using for years and I didn’t see anything on the menu Honduran.

On one of my first visits a couple of years ago a diner at another table, a total 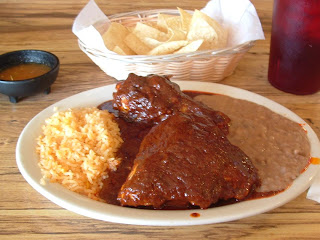 stranger, had raved about the mole rojo con pollo but I never got around to trying it. Recently I did and it is very good, very aromatic and bold and spicy. I’m not a big fan of moles nor an expert but this is probably the best I’ve had and it was reminiscent of a bowl of Texas red in flavor so there must be some ancho in there and it does pack some heat - my lips were still burning on the way home.

Houston food explorer Jay Francis has stated there are only 3 places he knows of in Houston that make their own moles from scratch - Hugo’s, La Guadalapana, and Felix, all three in Montrose and Felix now closed. I’m not knowledgeable enough nor have a well trained enough palate to determine if they make this from scratch but they have claimed to. One time when I tried to order it, the waitress said it couldn’t be served because the woman who made it was off that day and they had run out.

They also do Guilotas en mole but I haven’t tried it and I don’t know if they use the same mole.

Sides like refritos and arroz are so-so. The salsa has been very different on different visits, sometimes very good, sometimes only so-so. The hand-made flour tortillas, however, are excellent. The only thing bad I’ve had was a couple of years ago, their version of birria, the first I ever tried, which was mostly bones and weak broth with very little meat and took over an hour to come to the table.

The restaurant is in a former barbecue joint and they’ve done very little to alter the decor; there’s a wagon wheel chandelier and steer horns on the wall. It is clean and well lit. It’s never been very busy when I’m there but they do a good take-out business for lunch.

The mole rojo con pollo is $6.95 on the regular menu but it’s the Friday lunch special for $4.99. Apparently you have to ask about the lunch specials - they’re not listed on the menu.
Posted by Bruce at 4:46 PM

God, I used to have lunch there with my father back when it was a BBQ place. The place was loaded with roaches. I'll have to stop by for the mole, dad wasn't crazy about the change of ownership so we never tried it.

Never saw a roach in all my visits - maybe the new owners cleaned it up.