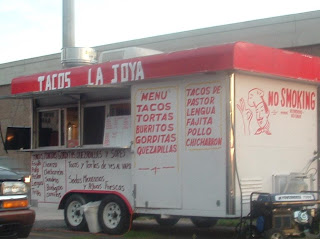 I'm always on the lookout for something different and new, something I haven't tried before, and driving down this stretch of the 59 frontage road I seldom use I spotted this lonchera I'd never seen before advertising tortas y tacos al vapor.

It's in the parking lot of the Bonita Chica Bikini Bar for those interested (there's also a Wings spot, what else?, and Tau Bay and several other businesses - it's a big parking lot).

Tacos al vapor, i.e., steamed tacos, are a rarity around here. I can't name one place that serves them and I had to give them a try. According to some discussions and explanation online, they may be produced by layering tortillas and meat in a tamalera, covering with a towel and steaming for a hour or so. Sometimes the tortillas are folded over the fillings and the resulting tacos are somewhat like dumplings; some people prefer to eat them with a fork.

That's not the way mine were produced, however. I saw tortillas being put into the tamalera, just inside the window where you order, but the tortillas for my tacos came out of a plastic bag and were heated on a griddle, just like other tacos are done. But with the differences that they were heated in stacks of two and for a very long time, maybe close to five minutes, getting flipped at least a dozen times and tested (kudos to the taquerero for wearing a plastic glove as he is supposed to). The burner must have been on very low. 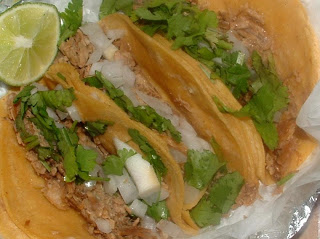 At last they were removed from the griddle and assembly took place very quickly. A pile of meat was retrieved from the tamalera with tongs and the cebolla y cilantro were added, they were wrapped up and handed to me along with a half lime and a small cup of dark green, thick salsa, in exchange for $3.75 for three and I was on my way. They're available only with this chopped beef filling.

It was apparent right away when I dug into them that the tortillas were very moist so I concluded they must have been steamed previously and held until needed. The quantity of salsa was completely inadequate but it was a squeeze of lime that most benefited these delicately flavored tacos. Obviously with steamed beef, you're not going to get the intense flavors of some other means of preparation, so if you're longing for the caramelized beef of tacos al carbon of the intense flavors of al pastor or barbacoa, you're not going to get it with these tacos. I really liked them however.

The first time I saw the wagon during the day it was closed; I caught it open around dusk. I didn't notice any posting of hours but since it's only about 20 yards from the door to the bikini bar, I'd hazard a guess they're only open in the evenings.

Now, does anybody know where to get tacos a la plancha in Houston? That's another method of preparation I'd like to try.

Edit to add: I was quite surprised to read in the Press that these tacos did not live up to my expectations. I hadn't realized that.
Posted by Bruce at 12:58 PM 1 comment: