As mentioned in a post under News, this place has changed ownership and become Saffron Kabob House. There is now an Afghan menu plus a Persian menu. I have not visited since the change so the following review may be useless.


I’ve noticed this restaurant many times driving by and wondered about it but never remembered it when trying to decide where to eat until a few months ago. It’s located on the second floor of the Plaza Center at Hillcroft at Harwin and is easily missed. I was surprised when I walked in to find it’s a counter service place, although a very nice one. In such an out of the way location I expected a white table cloth restaurant.

There has been some minor difficulty understanding the person at the counter and the menu board is huge; I recommend studying the menu on the website before going so 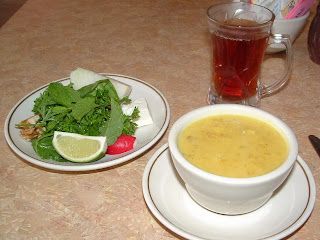 you’ll have an idea of what you want. Don’t overlook the signboard next to the cash register with the daily specials listed; also, there are signs in the window indicating that Ghormeh Sabzi and Gehmeh are available on pizzas now, which they claim is not available anywhere else in Houston.

The sabzi is very generous here, with parsley, cilantro, mint, onion, radish, feta, lime and walnut. Apparently with a paid appetizer you also get a complimentary pot of hot tea (very good) and a cup of Aash Jo, a barley soup with texture like corn chowder. And of course there is the taftoon, the Persian version of a flat bread, which is thin and somewhat crispy. Among the appetizers available their version of tabouli is very, very, very lemony.

Appetizers are hardly needed, however, as portions are very generous. I’ve not only never yet had room for any dessert, I've usually wound up taking about half the meal home. I’ve had the traditional Persian stew Ghormeh Sabzi here, at Bijan and at Café Caspian, and I like the version here just a bit better, owing, I think, to a more restrained use of the dried lemon and maybe a little more fenugreek. The Gehmeh, pictured, however, is better at Bijan just down the street. The version here is dominated by tomatoes and you can hardly taste the split yellow peas; it reminds me of a pot of chili made by someone who loathes the taste of chili so tries to kill the taste of it with way too much tomato.

The best thing I’ve had here, indeed, the best dish I’ve had at any Persian restaurant in Houston, is the Zereshk Polo, basmati rice (polo) seasoned with saffron and topped with barberries (zereshk) and served with a quarter stewed chicken. Persians have 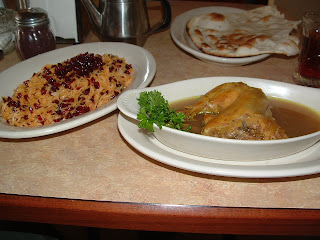 several very outstanding rice preparations and this is one very, very good one. I haven’t tried this at any other place yet, but I will.


Side note: the best version of Gorhmeh Sabzi I've had was in my own home. I found a cannister of the dried herb mixture (Sadaf brand) at Phoenicia Specialty Foods and tried this on my own. The aromas which filled the house while the dish was cooking really enhanced the enjoyment.