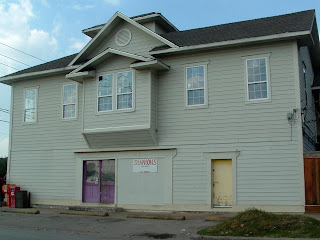 
I heard the buzz about Stanton’s a couple of years ago and had to make my way over there to try it. It’s great how people are always coming up with new finds and I try to do my part by trying lots of new places myself in hopes of striking gold.

Stanton’s has got probably the least street appeal of any eatery I’ve seen in Houston; you’d hardly know it’s a convenience store, much less serves food. Inside the faded lavender doors, the floors are worn, the lighting dim, the convenience store racks poorly stocked, boxes and crates, etc., blocking access to much of the space, a barren meat/deli case, but at least the food prep and serving area that can be seen is spic and span.

Like one of our newspaper reviewers recently wrote, I prefer to order a burger the way a place serves it on the first visit, to get a sense of what they think is a great burger. It reveals a lot to me and, sometimes, I pick up on something new I’d never thought of before.

Stanton’s serves a humongous burger; it barely fits in the Styrofoam box and that’s a 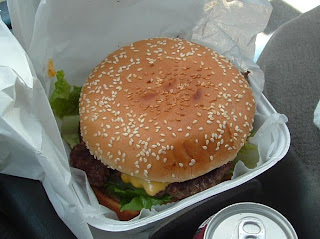 problem since there’s no place to eat except in your car (I’ve since learned there’s a small, tree shaded city park about a mile north on Houston Ave.) But it’s a bit of a hassle trying to eat that burger in the car.

Despite looking awesome I was disappointed in the burger on two counts, first, the meat was quite flavorless. I thought they could have either used a better quality of meat or at least added a little seasoning mix to it. Secondly, and more importantly for me, the main flavor that hit my palate on my first bite was mayonnaise, the burger was swimming in it. An all-the-way cheeseburger was supposed to have both mustard and mayo but the mayo stood out over everything, even the bacon. Overdoing the condiments is a sure sign of a bad burger to me and as much as I wanted to like that gorgeous looking burger, I was unhappy.

On a second visit I told them to hold the mayo, thinking that might do the trick, but in it’s place they used a surfeit of mustard. Now there should never be more than a smear of mayo on a burger IMO but a mustard burger is fine - so long as it’s not overdone, as this one was.

Two strikes and yer out. Well, here’s the deal: within less than 10 minutes of Stanton’s are three of my favorite burgers in Houston, at Christian’s, Lankford’s and Someburger. If I have to drive that far, I’ll go to one of them. Now if Stanton’s was close to me - I live in a part of town devoid of good burger joints - I’d probably hit them regularly and learn how to cope with the way they fix the burger and order it so I got it the way I wanted it. (And I wish I had a gallon of gas for every time I’ve thought about a Houston eatery “if it was in my neighborhood I’d probably be a regular, but it’s not worth driving half-way across town for”).

Besides, though there was a time, only a year and half ago, when I longed for these over-sized burgers and thought it was a sign I was living the good life by polishing one off, I no longer like to stuff myself when I eat and I much prefer a burger only about 2/3s the size of Stanton’s at most. You know the Surgeon General has determined if you eat biggy-sized portions, you will become biggy-sized, and dang if it didn't happen to me. I'm working on it, diligently, though.

This is not just a burger joint, there are lots of other items on the City Bites menu but I’ve tried only one of them, the chili. I asked about it on several visits but they had none to serve. It’s listed as chili and rice and besides not having a pot of chili simmering on the stove, the owner told me she didn’t have any rice ready to serve either. Like many places that serve chili, they say they get too little demand for it in warm weather to keep it ready so I made a point of going in on a very blustery day and they did sell me a container of chili, although they still had no rice. It was quite a wait and what I got was perhaps the worst excuse for chili I’ve ever encountered in Houston. Unfortunately, Stanton’s has taken their cue from Wendy’s; the chili consisted of chopped up, cooked hamburger patties in a very, very tomato-y soup with almost no taste of chili powder or cumin. Strike one and yer out.
Posted by Bruce at 5:07 PM