Pete’s has been one of my favorite eateries for a number of years but unfortunately I have to emphasize the ‘has been.’ My most recent visits, over the past year and a half or so, have resulted in some disappointing fare.

I liked the burgers at Pete’s even before I started trying to carefully downsize the portions of food that I ate; it was a modestly sized burger, freshly ground meat (it 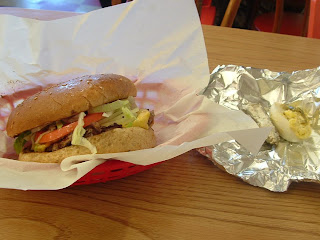 is a butcher shop after all), fresh buns and fixings (yes, that’s a whole wheat bun). I also enjoy the ambiance of eating in a real butcher shop/grill and the array of sides that are available; given my french fry fatique I’ve never even tried the fries. But recently I tried their new home-made jalapeno bun and was disappointed both in the bun and the burger, which seems to have been up-sized and was simply a melange of flavors, none distinct. I like the contrast of tastes, textures and temperatures of a well made burger, the sizzling hot patty contrasting with the chilled fixings, etc., not one where everything seems to comes together as one flavor at room temp.

Other foods I’ve tried at Pete’s have not been as dependable. I used to go often for the chili which I regarded as among the best in town but a year ago, every time I 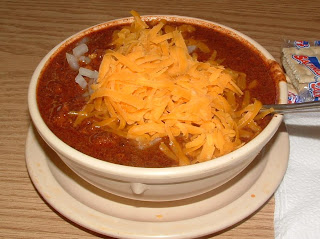 tried it, it was insipid. Like many places in Houston it’s only prepared when the weather is cold - there’ll be a sign on the door when it’s available. One time I had it there was very little cumin or chili powder; another time a surfeit of black pepper and perhaps no red pepper (I was perplexed by the grittiness in the bowl until I figured it out). Another time there was so much cheese piled on top that it made me realize cheese is a mistake on chili unless what you really want it chili pie. I never even got around to stopping in this most recent winter to have a bowl.

Over the years I’ve become more and more of a purist about chili and this was the bowl that killed the idea of cheese as a condiment on chili; the only thing I add now is chopped raw onions. 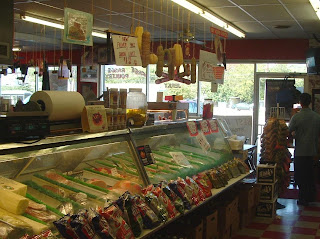 awful. The Chicken Fried Steak sandwich I tried one time was made with a frozen pre-fabricated patty and had a lot of gristle - not what I expected from a butcher shop.

They offer Hank’s and Jones sodas, Coca Cola Mexicana and Dublin Dr. Pepper and a good selection of different brands of chips. The store has recently been remodeled and expanded. Beyond the cash register in the picture now is an expanded convenience market and there are in store made jellies and salsas and more.

There is barbecue available and sausage on a stick - under heat lamps in a meat case. Sometimes the chickens look pretty good but other times they look very dried out. I’ve never tried any of these offerings.

Until I recently tried the new bun, the burger has never disappointed. 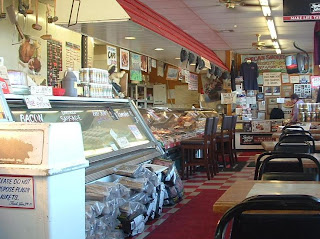 Pete's Fine Meats
Posted by Bruce at 1:56 AM

Labels: Chili, The Burgers of Houston