From my kitchen, inspired by the Korvkiosks of Stockholm

Forget about your chili, cheese and onions, forget about mustard and sauerkraut, pack up the sport peppers, neon green relish and celery salt and ship them back to Chicago, the Swedes have determined that the best condiments for a hot dog are mashed potatoes and a creamy shrimp salad.

I mentioned my Swedish ancestry when I blogged about my experiences at Ikea’s Kräftskiva a couple of years ago and I’ve been dabbling in Swedish cuisine ever since, attempting recipes in my kitchen and attending special events at Ikea like the Julbord and Midsommar Smörgåsbord and also events staged by the Swedish Club of Houston.  Over the last few years I’ve also been turning into something of a hot dog fanatic and snob, so when I first read about the tunnbrödrulle, a Swedish version of a hot dog, I knew I had to try it.

The poor tunnbrödrulle, which literally translates as thin bread roll, made with a flatbread that is possibly Sweden’s oldest bread, is the object of derision and scorn almost universally.  People turn up their noses and make faces and proclaim ‘that’s just wrong’ without ever trying one.  It was even the object of derision on The Chew last year.  But I am a contrarian by nature and in the face of all this negativity I was certain it had to have some redeeming qualities and I set out to learn about and create tunnbrödrulle in my kitchen for my own enjoyment.

Most of what I learned at the outset came from Chicago’s LTH Forum.  At one time in the late 1800s, Chicago was called the second largest Swedish city in the world and there still is a Swedish presence there, as there is throughout much of the upper midwest and Great Lakes region.  What I learned is that there is no set formula for one but typical ingredients include a green salad or salad greens, mashed potatoes, mustard and ketchup and sometimes mayo, too, sometimes ‘green mayo,’ some form of cucumbers, lightly brined or as a relish, a sausage, of course, and a creamy shrimp salad called raksallad.  Det är jättegott! I thought to myself silently (since I don’t know how to pronounce it).  Yum!  Well, okay, I had some doubts of my own but I was determined to try one   I discovered Ikea sells a version of  tunnbröd in it’s Food Store as well as Swedish mustard and ketchup, and a recipe for raksallad was not hard to find online, so I was on my way.  It seemed the biggest hangup was going to be finding the right sausage as Swedish sausages are not imported into this country.  I was particularly interested to read that reindeer sausage is sometimes used but good luck finding any of that here in Houston.

Tunnbröd is made from various grains; in the north of Sweden it is sometimes made with barley and potato flour, which may be the original formulation.  Ikea’s is made from wheat flour and beet flour; it resembles a squarish, quilted flour tortilla, soft and pliable and a little bit spongy.  I’ve become fond of the bread itself, very lightly toasted. 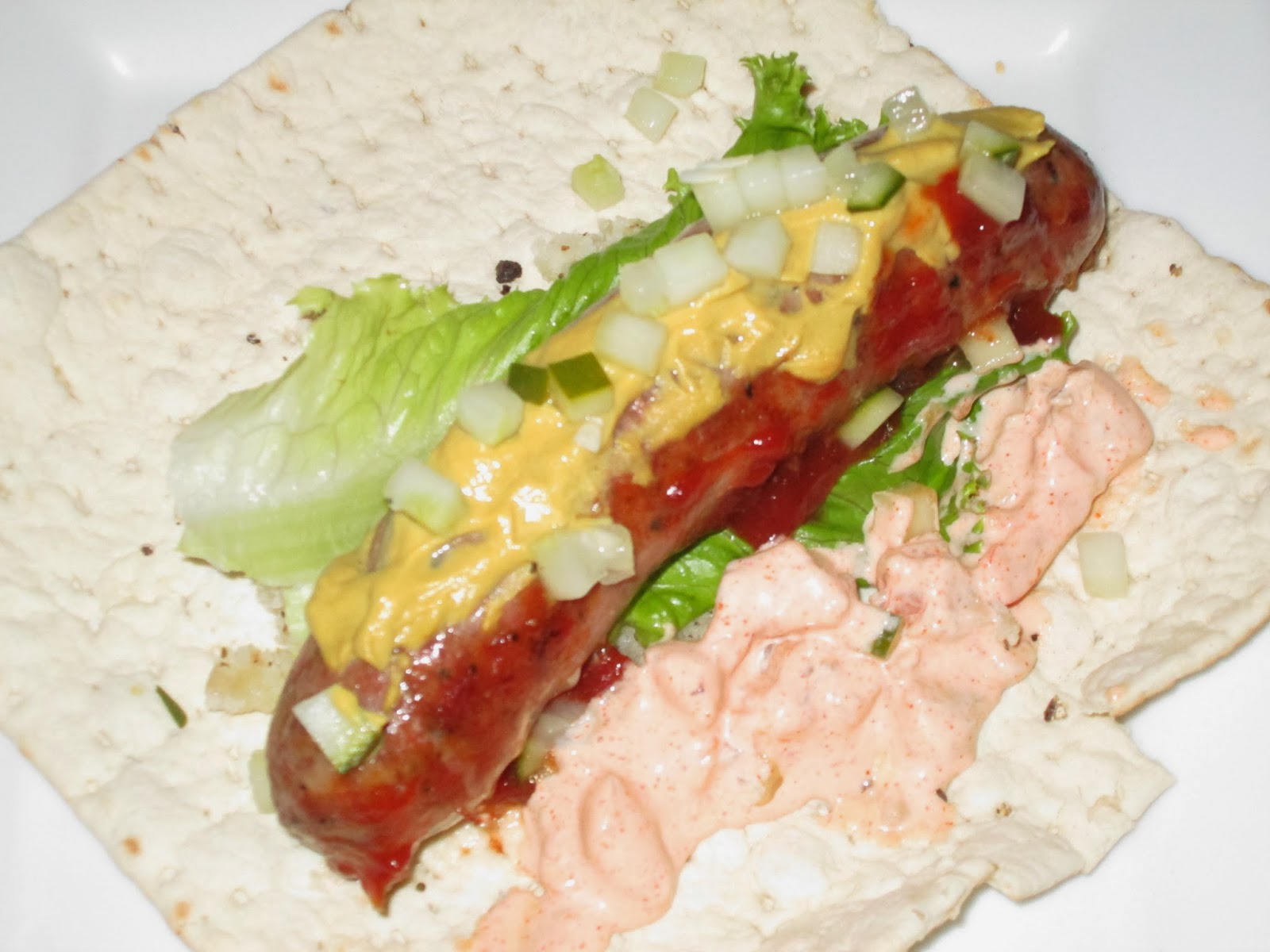 I started with the notion that these were essentially Swedish soft tacos.  I tried all sorts of sausages using the Ikea tunnbröd, every brand of natural casing wiener I could find in Houston plus other sausages including a venison sausage from City Market in Schulenburg which I thought might be closest to reindeer, but it proved to be too lean for satisfactory hot dog. 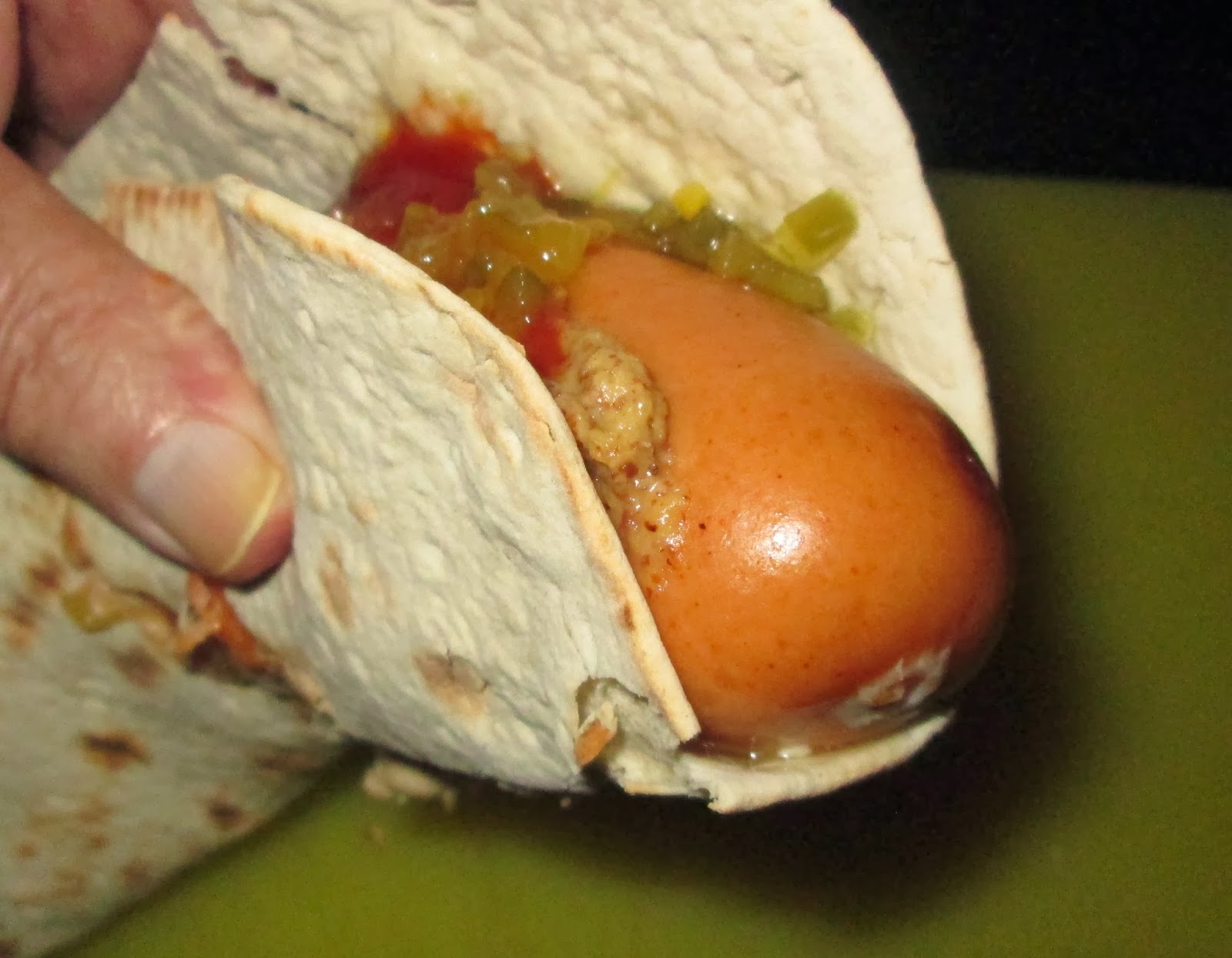 One of the best I made was with two natural casing veal cocktail wieners from the Russian General Store on Hillcroft which are similar to prinskorv, the Swedish version of cocktail wieners, usually consumed around Christmas and always a part of the Julbord.  That one was such a success I tried the full-sized veal wieners from the same place, jumbo wieners which weigh between 5.5 and 6 oz. each, and that is when the whole project fell apart in my hands.  I was using a creamy version of mashed potatoes and pickle relish, what Swedes call boston ghurka (it has nothing to do with the city of Boston), and it started disintegrating before I could get it to my mouth.   Actually, it had been an issue from the start that Ikea tunnbröd is too fragile and I had to give up on it and start looking for another flatbread to use.

That is when I thought to look on the internet for pictures of tunnbrödrulle instead of discussions, which I’d never done, and discovered I had been doing this all wrong from the start.  These aren’t Swedish soft tacos, they’re Swedish wraps, and the tunnbröd needs to be bigger.  I also observed there is a particular way they are put together with a sausage which may or may not be a part of the appeal.

I found recipes galore for tunnbröd and even a video showing the procedure and while I have every intention of making some in my kitchen eventually for the short term I opted to head over to Cedars Bakery on Richmond for some of their large diameter, thin khubz arabe which are meant to be used as wraps, not pockets. 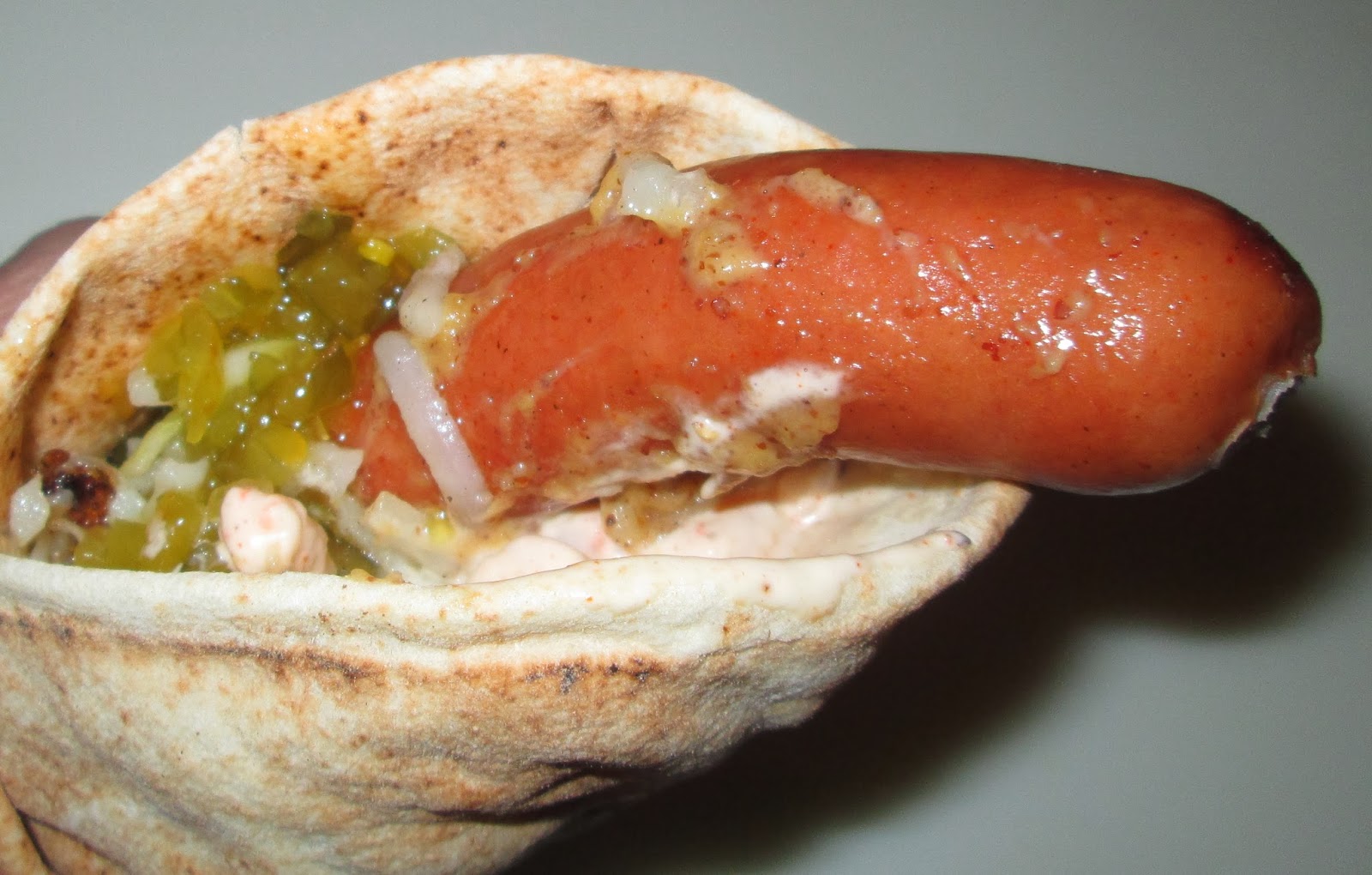 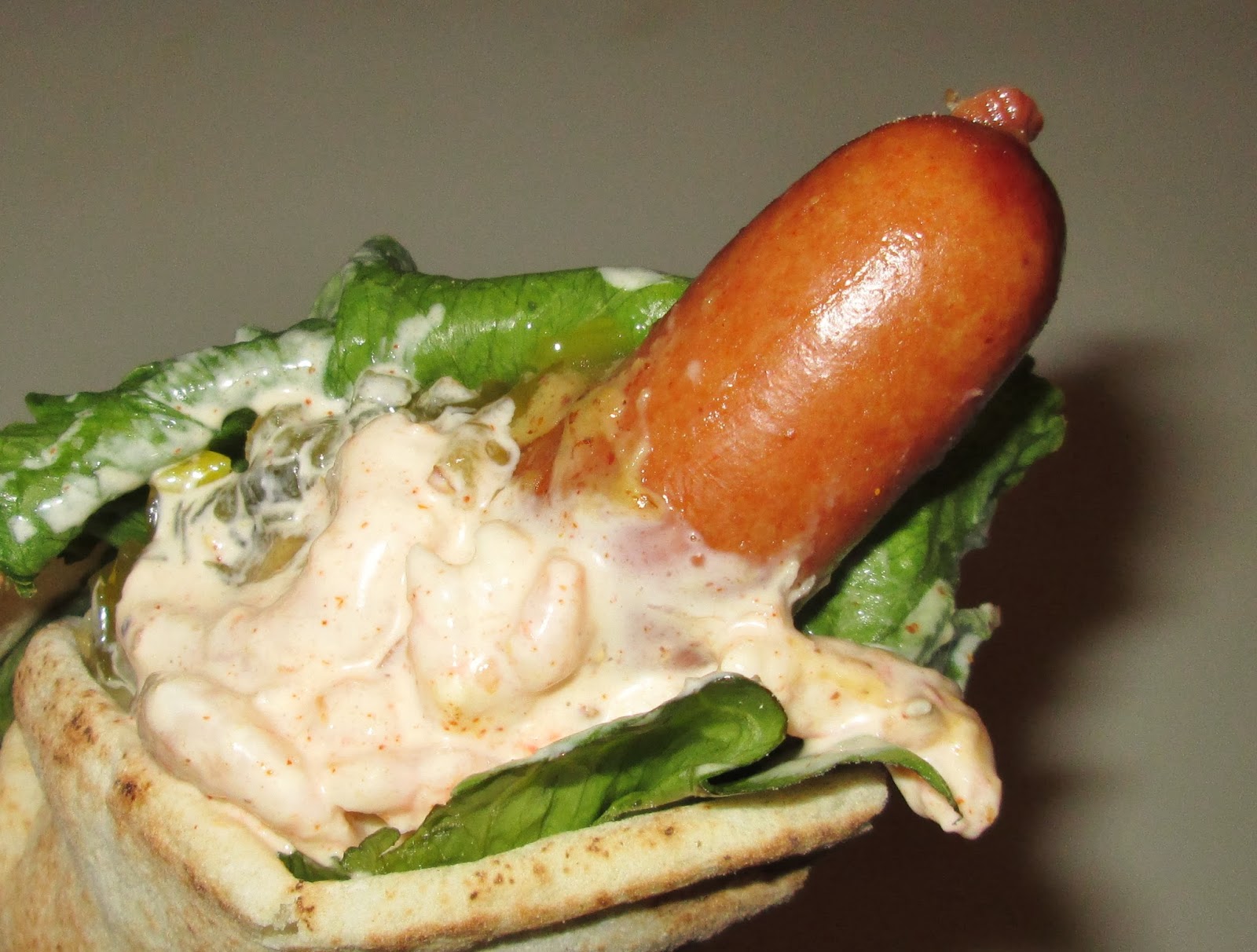 I managed to score a package of loaves still warm from the brick oven and set about straightaway making a couple of hot dogs, using a pork and beef Usinger’s natural casing wiener from Spec’s and the 100% beef Dietz and Watson New York Brand natural casing wiener from the new Fiesta Market Place in Sugar Land.  Det är jättegott indeed!  Wrap your fist around one of these and you’ve got a real treat.  And this manner of presentation has the advantage from the hot dog snob’s point of view in that you get to taste the wiener sans any condiments, a plus since the quality of the wiener is the most important factor in determining whether a hot dog is good.

I need more practice at putting these together.  There is a problem getting all the condiments distributed throughout the wrap and the Cedars loaves are a little bit big and need some trimming to keep the bread-to-fillings ratio in balance, but this works much better than using the Ikea product.

So what’s the verdict?  Brilliant culinary innovation or deserving of all the scorn?  I had my doubts going into it, particularly about the raksallad, but I’ve had slaw dogs as they are done in the southeastern United States with a creamy slaw topping so I thought, why not?, and it’s perfectly acceptable to me.  I also understand the raksallad is used on burgers and other sandwiches, too, and I’m going to be trying that, particularly on a burger.  As for the mashed potatoes, I’d much rather have them than crushed potato chips, much less the crushed potato chips with pineapple syrup as hot dogs are served in Colombia, although I’ve cheated a bit at times and used shredded hash browns, crisped up a bit. Shoestring fries might be good, too.

I’m planning a trip to Sweden either later this year or next and the first thing I’m going to do when I get off the plane is head to one of the korvkiosks. I especially intend to seek out Günter’s, the subject of a rave report on Serious Eats a few years back.  Hot dogs are apparently Sweden’s most popular street food and after-the-bar nosh.  In fact, Swedes seem to be crazy about sausages; maybe my fascination with Texas sausage makers in inherited.

Postscript: Some comments from my 3rd cousin in Stockholm with whom I have been corresponding for a couple of years about family history and asking many questions about Swedish cuisine.  She has a dim view of most American’s concept of Swedish cuisine, snarking about ‘all that beige food’when I sent her my pictures of the Ikea Kräftskiva, a meal I really enjoyed,  but she was very diplomatic when commenting on my early ‘Swedish soft taco’ variations of the tunnbrödrulle, instead offering some historical insight. Tunnbrödrulle first appeared in the 1960s in the northern part of the country, substituting tunnbröd for korvbröd or sausage bread, a traditional roll (that looks suspiciously like a hot dog bun to me).  The popularity has spread across the country and it is now commonly offered with ingredients besides sausage including roast beef, salmon, vegetarian, and, yes, reindeer meat.  In other words, as I was to conclude separately, these are the Swedish version of a wrap.  Regarding the mashed potatoes, it is traditional to serve mashed potatoes (mos) with sausages in Sweden so putting them on a hot dog is a no-brainer but the raksallad is another matter.  Not all Swedes agree that it’s appropriate and there is much disagreement, just as there is in this country about the best toppings for hot dogs.
Posted by Bruce at 4:58 PM 2 comments: