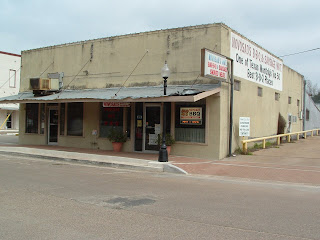 I’ve driven thru Hallettsville many times and seen Novosad’s and have been wanting to try it but I’ve always been too sated from just having eaten great barbecue in Lockhart or Luling. One chilly Saturday more than a year ago my Dad and I made a special trip from Houston and I’m glad we did. Since then I’ve made just one other visit on my own.

Novosad’s is on S. La Grange in Hallettsville. The street runs n/s just one block west of US 77 and Novosad’s is a half block north of US 90A. Look for the clock tower on the 1897 courthouse which rises above everything in Hallettsville; Novosad’s is just off the SE corner of the Courthouse Square. It is only open Tu-Sat, 10a-3p.

The place is small - 2 tables up front, 5 or 6 in the rear, and dimly lit. It makes Black’s in Lockhart look almost cavernous by comparison. The menu is on the wall; besides the usual offerings, Novosad’s is known for lamb ribs and pork steaks, but I haven’t tried either of those.

This meal of 1/4 # brisket, 2 ribs and a link plus macaroni salad and iced tea came 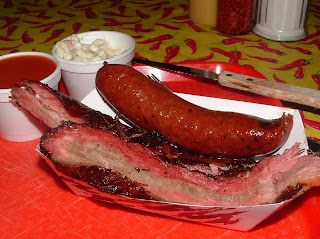 They had some regular store bought bread but I was given 4 slices of a nice crusty, home made bread. Whether they make it themselves or it comes from Besetney’s Kountry Bakery down the street on 90-A, another place I like to stop in Hallettsville, I don’t know. According to Robb Walsh’s book their cole slaw is special but I’m not a big cole slaw fan, especially sweet slaws, and I’ve passed on it.

The brisket had a good 3/8" smoke ring and intense smoky flavor and was very good, reminiscent of the very best I’d ever had at Dozier’s in Fulshear in it’s prime. Actually I’d rate this brisket as better than what I had at City Market in Luling, my favorite Q joint in the whole state, on my last visit a few months earlier when I got some subpar brisket.

The ribs also were reminiscent of the best I’d ever had at Dozier’s though not quite as well done and without as much of a smoke ring and were not as smoky as the brisket. They had what is probably the crustiest exterior I’ve ever had on ribs which was quite salty but I liked them

The sausage/hot link was a surprise. The only thing I’d been able to find on line about Novosad’s was a several year old piece in the Austin Chronicle which described the sausage as coarse ground but what I had was like a wiener in texture (sorry I didn’t think to get a picture of a cut piece). It was in a natural casing with a very good snap to it and quite good – green and red specks and seasoning suggesting maybe some chili powder? - not what I’d expected. I dipped several bites of the sausage in the mild bbq sauce which went well with it but I didn’t want any of the sauce on either the brisket or ribs. Like the best Texas bbq, they didn’t need any sauce.

Besides enjoying the barbecue I've also picked up some of their wieners and brought home to sample. Like many Texas barbecue places and smokehouses, they produce some wieners which are better than the usual supermarket brands. I'll be posting a report on Texas sausage maker's wiener offerings in the Texas Sausage Trail section.

I never saw the Texas Monthly piece a few years ago which ranked Novosad’s in the top 50 in the state and I don’t know where it ranked but I see it’s once again been highly ranked in their latest survey.
Posted by Bruce at 5:06 PM

You missed, what is their best item in my opinion, the pork steak. World Class!

Duly noted and thanks.

It has been a "Very" long time (1960's) since I've had Novasad's BBQ. But when I was a kid we had a deer lease in nearby Sheridan. We would drive up to Halletsville and pick up BBQ brisket and homemade bread. I can remember it was "To Die For". Since that time I've never found any brisket that could compete. If it's still that good, I need to get myself up there again before I die.