The long dormant Total Catch Market at Louisiana Foods on Saturday mornings is no more.  P.J. Stoops has announced he's leaving to start a bycatch market of his own.  Alison Cook has more details on her blog on 29-95.

Hooray!  I can't wait.  Get to sleep in a little longer on Saturday?

Remembering PJ discuss how to fix the fish, seeing his discussions also in his posts each week about how to prepare and serve the fish, I'm hoping this is more than just a market.

(My original report on Total Catch).
Posted by Bruce at 2:09 AM No comments:

I was really excited to spot this restaurant on the eastern outskirts of old downtown Stafford and astounded to discover it’s been in business for 2 years now.  It’s another restaurant offering a regional cuisine; there are dishes from all over India but there is a slight emphasis on dishes from the Spice Coast state of Kerala and the Chettinad region of Tamil Nadu; the chef is from Kerala.  Chettinad cuisine is said by the Wikioracle to be among the spiciest and most aromatic of the regional cuisines of India and that was certainly true of the one Chettinad dish I’d encountered before (at Sankalp in Sugar Land).  Chettiars are meat eaters and there are comparatively fewer vegetarian options than on many Indian restaurant menus, perhaps, but Chettiars do not eat beef or pork and there are no offerings of those meats.  Chicken, lamb, mutton (which here always means goat) and fish are the meats.

The restaurant seats only about 30 and while by no means posh is not a dive, either.  Tues thru Sat there is a lunch buffet ($7.99) from 11:30 to 3.  There are also lunch boxes to go for even less.  On Sunday it’s called brunch, the price jumps to $10.99 with about half again as many items from which to choose.  You get fresh butter naan to accompany the meal.  The advantage of the buffet is the ability to choose different items to sample and the availability of dishes not on the a la carte menu.  Plates are slightly over-sized and items are clearly identified so you know what you’re getting.  The disadvantage, particularly if you like spicy food, is that everything is very mildly seasoned.  Some dishes are just fine that way (and meant to be consumed that way).  In the evening (4:30 to 9 pm, Tues-Sun), the kitchen will adjust the heat level to your preference.  Prices are modest and portions are very large; one entree might easily serve 2, but you get only pappad, chutneys and rice or naan with an entree, everything else is extra. 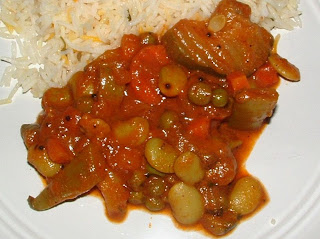 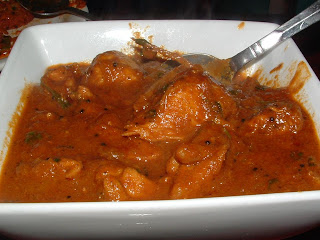 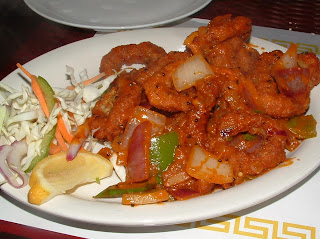 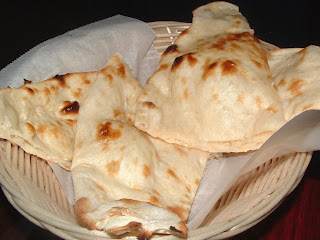 I’ve tried both the buffet and a la carte service and much prefer to go in the evening.  The best dishes I’ve had have included the Chettinad Vegetables, mixed vegetables in a curry with black pepper and roasted coconut and star anise, Chettinad Chicken, listed as ‘HOT’ on the menu but not as hot as the vegetables to my palate, and the Calamari Kochin, calamari rings battered and fried and served in a dry curry with onions, peppers, tomatoes and the occasional red chilli pepper pod.  This appetizer was large enough to be an entree for me. The mint-coriander-chilli pepper chutney is particularly zesty and good; the date-tamarind chutney has little bits of the fruit.

Off the buffets I did enjoy Tandoori Mushrooms (also available on the regular appetizer menu), coconut jamon, egg roast and kappa, both the latter dishes from Kerala.  Dishes I’ve been disappointed with off the buffet included the Mutton Chettinad, Chilly Fish, and Kerala Fish Curry.  I thought surely the mutton was supposed to be served spicy but it’s not listed as a ‘HOT’ dish on the a la carte menu.  If I ordered it off the menu I would ask for more heat.  The Kerala style Fish curry was no where near as sour or spicy as I’ve had it and come to love at other restaurants in Stafford (now 4 of them) catering to the ex-pat community from Kerala but that might just be because it was on the buffet.  Dishes I didn’t have room to sample off the buffet included Mutton Sagwala (goat and spinach), Paneer Korma, and Fried Rice.

The hottest things on the menu are a couple of vindaloos; the manager said the mutton (goat) curries are hottest.

I ventured away from the Chettinad specialties on one visit and tried the Balti Gosh, lamb with mushrooms and other vegetables.  I had read of Balti style dishes but never had one, am not even sure I’ve ever seen any on a menu of a Houston restaurant, and so I wanted to try it.  Balti style either originated in Pakistan or Birmingham, England, among Pakistani expats, it seems.  The dish is not listed as spicy on the menu but I asked for it to be ‘HOT’ and was rewarded for my troubles with bits and pieces of bright green chilli pepper pods throughout the dish and it was the spiciest thing I’ve had.  This is a good thing, of course, but I found myself missing the presence of black pepper which seems to be one of the defining characteristics of Chettinad dishes and the curry was definitely heavier.

As far as the spicy and aromatic nature of Chettinad cuisine proclaimed by Wiki, I’ve found the food here not particularly aromatic and I went looking for more oracular pronouncements online.  I found discussions suggesting that characterization is largely the result of restauranteurs attempting to create a buzz about their restaurants when Chettinad themed restaurants first started appearing across India only about twenty years ago and is not necessarily true.  It seems Chettiars may actually prefer more subtle seasoning and many dishes are not meant to be spicy.  Whatever; the food here is good and this little restaurant has been growing on me with each visit.