Bissonnet is one of our great food streets with a very wide diversity of eateries. As far as ethnic or national cuisines go it's probably most known for Mexican and Salvadoran but there is Greek, Italian, Cuban, Ethiopian, Nigerian, Vietnamese, Kosher, Korean, Caribbean, Filipino, Colombian, Ghanaian, Pakistani and probably several others I've forgotten. The intersection of Hillcroft and Bissonnet has quite a diverse collection itself. Within a block or so are Hoagie's and More (Vietnamese/Salvadoran - a banh mi/pho/pupusa shop), Sheba (Ethiopian), Aroma Pizza Cafe (Kosher), Pupusa Buffet, Taqueria La Fogata, the venerable Droubi's (which I have just re-discovered after not having been for several years), Myung Dong (Korean), La Roca (Salvadoran tamaleria), a Honduran mobile unit and this place - a Turkish grocery.

It's a small, very neat and clean, well-stocked store run by two friendly young guys. Despite the size, it would be easy to spend quite a while browsing all the offerings, many of which you likely will not find elsewhere in Houston. There is a large selection of Turkish sweets and snacks, jarred olives and ajvar, stuffed zucchini, eggplant and vine leaf goodies, dried Turkish peppers, utensils for making and serving Turkish coffee, and much more. 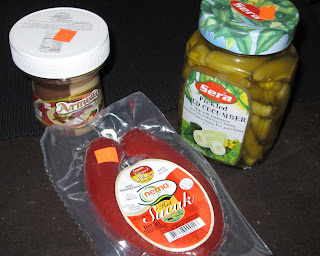 In a deli meat case are a half dozen varieties of sujuk plus beef mortadella. The sign indicates Hallal beef and chicken products are also available but they're not on display; there may have been pastirma but I don't remember it. In the coolers is a variety of cheeses from Turkey including Hellim, Peynir and Kasar as I recall, plus yogurt, aryan and other dairy products.

In still another deli case there is a small selection of Turkish olives. 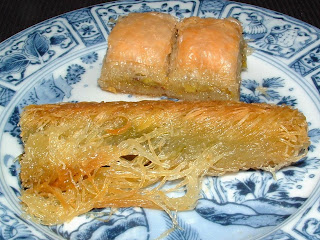 I went in hoping that they would have a ready-to-eat section offering some hot foods as so many Houston ethnic grocery stores do. Of course the olives and cheeses, etc., are 'ready-to-eat' but I was hoping to have found a place right in my neighborhood where I could grab some doner or pide on the run instead of having to drive all the way in to the Village. Alas, no such luck. The only offerings of that sort are in a deli case right inside the door, two pastries, baklava and kadaif burma.

The clerk told me they had just started carrying the kadaif and he preferred it to the baklava. Just looking at it I thought I might agree with him (okay, I botched that piece up a bit getting it out of the tray). It's twisted, shredded wheat (call it vermicelli if you like) with honey and pistachios. However the baklava was just awesome and was my favorite of the two. These are sold by the pound and that was almost 4 dollars worth (that's a dessert plate, not a dinner plate).

UPDATE - JUNE, 2014 - THIS HAS BECOME PANADERIA MEXICANOS & COLOMBIANAS WITH SIGNS IN THE WINDOW FOR TORTAS, BBQ, HAMBURGUESAS AND SUPER TORTAS BUT THERE IS ALSO A SIGN STATING THE BUSINESS IS FOR SALE.

This intersection has quite a collection of eateries representing three continents. There is Gorditas Aguascalientas and Costa Del Sol, a Salvadoran Restaurant and Pupuseria on one corner. Caddy-corner, in the same center with this new Mexican bakery and torta shop are Taqueria El Alteno, a Jaliscan style Mexican place, Tierras Colombianas, El Cuscatleco, another pupuseria, and Maru Ethiopian grocery. Less than 50 yards away is yet another Jaliscan style taqueria. Before Panaderia y Pasteleria DF moved into this space it was occupied by the Pie Factory, representing the good ol' USA.

It's a very plain space offering the usual Mexican pastries, cakes and breads. The bolillos are good but what's unusual for a panaderia is a large menu of 'Tortas Exquisitas estilo DF,' more than a dozen listed on the menu board and in signs in the windows. There are some familiar ones listed - Cubana, Chilanga, Asada, Milanesa - plus several I've never heard of before - Tatiana, Toluquena, Alemana, Espanola, Rusa - plus one listed in a sign in the window but not on the menu board that sounds intriguing - Torta de Nino Pobre. I'm wondering - have they come up with a sandwich combining the sandwich making artistry of Mexico City and New Orleans???? 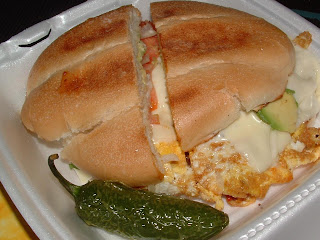 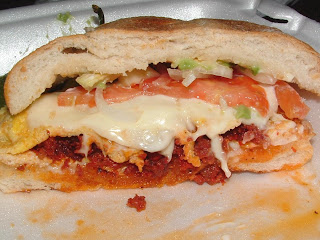 Pierna, Chorizo, Huevos and Milanesa are fillings listed repeatedly; I don't remember a Pastor. I tried the Torta Espanola - chorizo, quesilla, and huevo on a toasted telera with the usual accompaniments. It was embarrassingly, disgustingly good. These sandwiches are so huge one usually makes for two meals for me, or at last one meal and a large snack, but I finished this one off in one sitting; I couldn't help myself.

Just why it's called Torta Espanola I don't know since that clearly is Mexican chorizo, not Spanish. If the people running the notorious Heart Attack Grill in Chandler, Arizona, knew what they were doing, they'd have a whole section of their menu devoted to tortas - these are clearly not health food options. 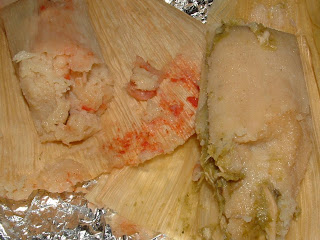 Besides the tortas they also offer burritos, quesadillas and a taquito plate plus tamales. These are the larger, denser Mexico City style tamales like those at Tamales Dona Tere. They're not quite as large nor quite as good as those, though. When I inquired about them the senora brought out the big tamale steaming pot from behind the counter and plucked out a couple to show me; obviously these are hand-made. They had only two varieties available, con pollo en salsa verde and con rajas in salsa roja. They were sold out of a puerco en salsa roja variety. I liked the rajas best - onion and chile pepper strips - though I still prefer a more moist Tex-Mex or Salvadoran tamale to the Mexico City style.
Posted by Bruce at 12:10 AM No comments: