Back in the dark ages, when I was a student at UT, one of my favorite restaurants was the Night Hawk on the Drag. I don't know how I managed to eat there as often as I did - Vienna sausages and saltines or canned soup warmed on a hot plate in my room was more common fare - but as my situation improved, I ate there 2 or 3 times a week. The daily plate lunch specials were very good eats; occasionally I'd splurge in the evening on one of the larger Top Chop't Steaks and on weekends, maybe a Frisco Burger with a gaggle of friends crammed into a booth.

Over the years, I often returned to the Night Hawk when I visited Austin. The chain briefly had a location in Houston far out on Westheimer but it didn't last and neither did the main restaurants in Austin. It got down to where the Frisco Shop on Burnet Rd. was the only outpost left; I'd visit it on occasion when in Austin and swear I recognized some of the waitresses (and customers).

Then a couple of years ago I heard that even the Frisco Shop was closing, a casualty of the drugstore wars in Austin. I made sure to stop by on my next visit to Austin for one last taste and caused some mild consternation with my camera. 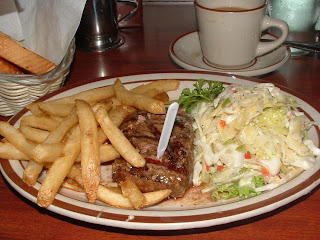 The Top Chop't Steak was not as good as I remembered it, although a little better than the ones you can find in the freezer section of every grocery store in these parts. Likewise the fries, which I had remembered as the best I'd had up to that point, were somehow not as wonderful, limper and perhaps a little too greasy. 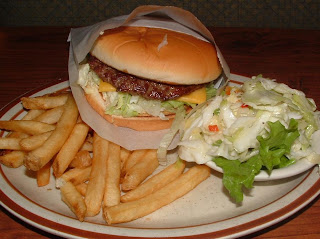 I had not been that fond of the Frisco Burger in my college and grad school days but over the years, perhaps as my taste in steaks improved, I turned to it more and more when I visited and I found it just as wonderful as ever. As is apparent from the picture it's very different from what most people want in a burger these days, smallish instead of so big you can barely pick it up, much less get it in your mouth. It's unique appeal lies partly in the special relish on the top bun, a blend of ketchup and pickle relish and maybe something else I think; it is also unfailingly freshly prepared and served on a toasted, soft bun.

The big surprise on this visit was the coleslaw, which I had completely forgotten over the years. Large shred cabbage, mildly acetic, crisp and well-chilled, it is perhaps my favorite restaurant coleslaw and I was amazed I could have forgotten it.

Recently I found out that the Frisco has reopened, apparently just a few yards away from the former location, and so I thought I would pay homage (and make use of these pictures). I'll be looking forward to a visit on my next trip to Austin.

The Frisco burger is one of my all time favorite burgers and it's good to know an old friend is going to be around for a few more years.

The Frisco Shop
Posted by Bruce at 8:37 AM