THERE HAS BEEN A CHANGE OF OWNERSHIP AT THIS RESTAURANT.

When I saw the mention on the front page of b4-u-eat.com last December about this new 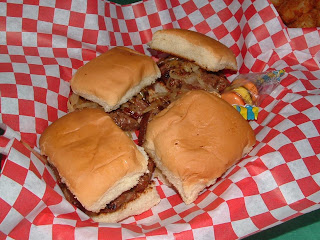 place I knew I had to try it in hopes the name implied they served sliders. Sliders are kind of a mini-obsession with me and they’re very rare on Houston menus. The place does serve sliders, although they claim that’s not why it’s called the Little Bitty Burger Barn; there are lots of other items on the menu and actually sliders are kind of hidden. The buns for their sliders (mini-hamburgers) are buttered and grilled rather than steamed and the onions are grilled. They’re not the best I’ve ever had but the best in a long time though I’d much prefer some raw onions on there. 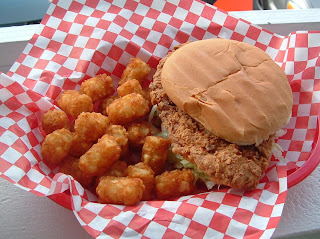 chicken fried section of pork tenderloin. They do a pretty good job with this one too and now that Heights Camphouse BBQ is closed, it may be the only one in town. I’m a native Texan but I think the Hoosier-style chicken fried pork tenderloin sandwich is far better than a chicken fried steak sandwich and I’m glad to have this place to replace the other one. As do many places in the mid-west where this sandwich is very popular they actually use a section of pork sirloin rather than tenderloin and it wasn’t pounded thin as it should be, but it’s still a very satisfying sandwich. 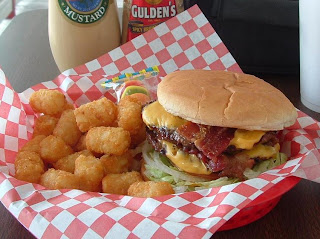 many other reviewers have raved about them so when I got a craving for a burger, I made the trip and I’m glad I did. The LBBB double meat, bacon cheeseburger is very satisfying. It comes with 2 pieces of cheese, one between the patties, one on top; the bacon rashers are also split, a nice touch. It started out looking very neat but became wonderfully messy and I barely managed the last bite before it would have disintegrated completely – the way I like a burger. Unlike some places, I could taste all the ingredients - the cheese, bacon, meat, onions, mustard. Some places use such insipid cheese and so little onion or mustard, etc., you have to look to make sure they remembered to put it on there.

The place looks suspiciously like a double-wide trailer and is very neat although very tiny. Kudos to the place also for their very friendly staff. My only gripe has been because I’ve preferred to eat on the ‘deck’ outside since it’s so cramped inside and on my last visit, the fumes from a nearby business were very unpleasant. I should have been more cognizant of that when I first got out of the car and stayed inside. They could use a fan on that deck.

That burger looks awesome. I'll have to get over there. I take it you like tater tots.

I've suffered from french fry fatique for several years and I always am happy to have alternatives. The menu also offers fries, chips, and, for a buck extra, onion rings. I got the tots on my first visit and have stuck with 'em.