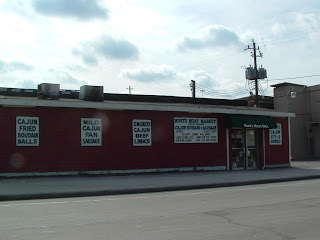 UNFORTUNATELY BURT'S IS NOW PERMANENTLY CLOSED.  THE SAUSAGE MAKER, RESPONSIBLE FOR THEIR OUTSTANDING PAN SAUSAGE AND OTHER VARIETIES, REPORTEDLY NOW WORKS AT HENDERSON AND KANE OFF WASHINGTON AVENUE.
5910 Lyons, between Lockwood and Kress

This is one of my favorite finds of the last several years. Burt’s is an actual meat market and small convenience store but they have a hot foods deli where they specialize in Cajun and soul food dishes and they do an excellent job on lots of things.

When you go in, you turn to the left and usually find yourself in a line, waiting to be served in the hot deli. Sometimes the line moves pretty fast - there are lots servers working behind the counter - but sometimes people (like me, for instance) come from across town to stock up not just get enough for one meal, and it can take a little longer. You’ll have to wait until you get closer to the counter to see the menu which consists of pieces of paper stuck on the wall to the left of the counter and get a look at the offerings yourself.

The gumbo is excellent, dark and rich, loaded with chicken and sausage. The first 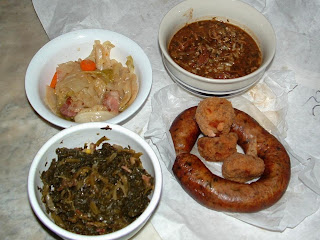 time I ordered it and saw the server deftly blending the rice and gumbo in the container I wanted to leap over the counter and grab it and gulp it down. Good thing I didn’t, though, it’s served piping hot. The greens are excellent, with a nice amount of heat, and the cabbage and sausages (+ bacon) is also excellent.

Then there’s the boudin which is sold both as links and loose, with the casing removed. It’s available either spicy or mild and it is without a doubt the finest boudin I’ve ever had. Of course that’s a matter of taste but I like that the rice is still firm, the grains identifiable, the burst of piggy-liver goodness on the first bite, the little, identifiable chunks of meat and even bits of green onion still having some of the texture of the raw vegetable. The boudin is also sold from the meat case to take home and prepare yourself and boudin balls are available.

The only things I’ve been disappointed in were the boudin balls and a piece of pie, I think it was supposed to be chess or buttermilk, which wasn’t much better than I could find at a supermarket. The boudin balls are precooked and under a heat lamp and tend to have absorbed too much grease in the cooking. One thing I’ve learned to look out for is if the server tries to drain too much of the pot likker off the greens or the cabbage, as mine did in the samples pictured here. They try to pack as much into the containers as they can and sometimes that means draining off too much of the liquid. I learned that too late for this report unfortunately.

There are many, many things offered that I haven’t tried but one unusual item I’ve had is the fried pork chop sandwich. I have an interest in the Pork Tenderloin 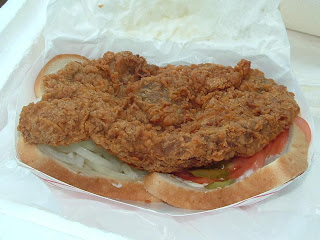 sandwich common in the mid-west and very seldom seen on menus in this part of the country, but I thought I’d try Burt’s version of something similar. I’m not sure if this is a soul food thing or a Cajun thing but I’m guessing they don’t sell very many. The pork chops are already cooked and under the heat lamp - not an ideal prep, obviously. They’re quite large and served bone-in, even for the sandwich. The two times I’ve tried this it was prepared very differently but neither time did they have any ice berg lettuce. This is not a bad sandwich; not as good as an Indiana Pork Tenderloin (a credible version is served at the Little Bitty Burger Barn) or the fried pork chop sandwich at Sparkles’s Hamburger Spot (a review to be posted soon).

There is no eating allowed in the store and no place on the premises other than the front seat of your car but there is a small park behind the Tuttle branch of the library at Lyons and Kress, just a few blocks east. Other than that my only complaints about this place are: too many things to choose from and too far away. With regard to the latter, though, maybe that’s a good thing. If Burt’s was right around the corner from me I think I’d eat there far too often and I don’t think any of the offerings qualify as diet food.

For the sake of the pictures, I took the food home and put it in bowls; it’s served in lidded plastic containers and though the gumbo is so thick it’s practically forkable, all you get is a spork. The pork chop picture was taken in the front seat of my car. Here's a follow-up review.
Posted by Bruce at 10:48 PM