I’ve lived about 5 or 6 miles from this place for 30 years but only in the past year tried it out. It’s easy to miss, tucked away in an L-shaped strip center at the corner of Wilcrest and the Southwest Freeway outbound feeder. This was my first experience of any Colombian food other than the rotisserie chicken available at places like Dodo’s and Pollo Rico and I was very impressed with the extensive menu, the restaurant itself and the food.

Perhaps their most popular (and best?) dish is the Bandeja Montanero, or Mountain 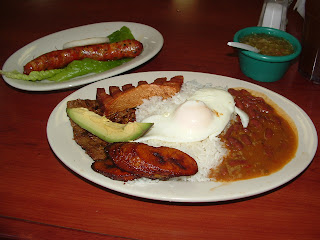 Tray, which is another name for a typical Colombian dish often called the Bandeja Paisa. Bandejas are common offerings in several country's cuisines - the word means platter or tray and this is like a Tex-Mex combo plate with generous portions of some typical Colombian foods including frijoles rojos (red beans), arroz (rice), chicharron, plantanos maduros, avocado, sobriebarriaga (skirt steak) and a fried egg. The lunch special is just $5.75 and is a generous portion of food. At most Colombian restaurants that offer a version of this the plate also includes Colombian chorizo but at La Fogata that is extra ($3 on the breakfast menu, with an arepa).

This blew me away the first time I tried it. The frijoles rojos and plantanos maduros were particularly good. It was apparent there was some pork and pork fat in the beans.

Colombian style empanadas are also available on the breakfast menu (but served all day) and are very popular. They’re similar to Venezuelan rather than Argentinan empanadas, made from an arepa wrapped around a ground meat and potato mixture and deep fried. They can be quite greasy; in fact, fried foods here in general are disappointing.

They offer a special soup each day and I was interested to note the weekend special is Cazuela de Mariscos, a seafood soup. The menu doesn’t include much descriptive help on the dishes and all the menu offered for this was ‘Colombian Gumbo.' Red 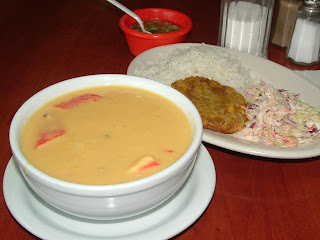 beans and rice and gumbo??? - maybe there’s been some Cajun influence in Colombian cuisine. Or maybe not. This gumbo was not much like Cajun gumbo, a buttery base with some shrimp, tiny oysters and mussels, squid, pretty good sized portions of a mild white fish, thicker than typical tilapia filets so I wasn’t sure what it was (the only fish on the menu otherwise is red snapper but this was not red snapper), and some dumplings that were possibly yuca based? It was accompanied by some rice and slaw and, on the occasion I tried it, a rather unappetizing looking arepa.

Other dishes will be familiar to fans of Mexican cuisine, perhaps with slightly different names. They have liver, higado, en salsa or a la plancha, ditto for sobriebarriaga (skirt steak) and lengua sudada (beef tongue in sauce). They have a breakfast menu, jugos naturales (natural juices), a couple of Colombian sodas (Pony Malta and Colombiana) and a small selection of beers. One dessert I’ve wanted to try but either never had the room for or it wasn’t available because a staffer had called in sick is Arequipe, homemade caramel. And they have Tres Leches.

La Fogata appears to be a family operation; most of the staff speaks English and is very friendly; they do a very good lunch business with several specials to choose from. The decor is pleasant, about on a par with Café Pita +; the TVs, regular sized, have either been off or had the volume at a very reasonable level everytime I’ve visited.

First impressions can often be very good and in truth I haven’t been quite as impressed with this restaurant on any visit subsequent to my first one but it’s still a good neighborhood find.
Posted by Bruce at 9:32 PM