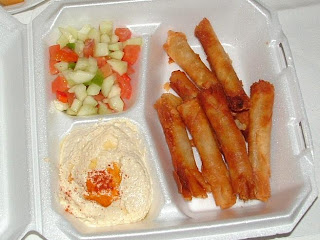 A SISTER RESTAURANT, SABA'S GRILL AND WOK IS KOSHER MEAT.

Moroccan Cigars ($8.75) - the generic term is cigarim. Crispy, crunchy, deep-fried Kosher veggie taquitos. I loved these. The hummus was a little grainy and the
spices flat on this occasion. The simple Israeli salad is just diced cucumber, tomato and bell pepper. 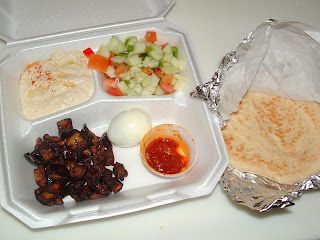 Eggplant, hummus (much better this time), Israeli salad, harissa, hard-boiled egg and a piping hot, thick and almost fluffy pita that was excellent. The eggplant was chilled - I thought it would be better warm - but I made 2 very satisfying veggie gyros out of this and could have made maybe 2 more. Next time I’m going to ask for a second pita and maybe zap the eggplant briefly to heat it.

Malawach pizza (mah LAH wah)($5.75). Wiki says this is from Yemen - malawach is multiple layers of thin, deep-fried crepes. The crust on this was close to a half 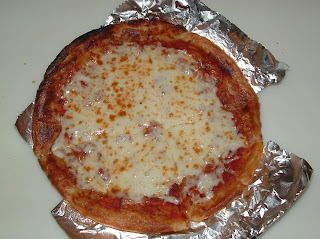 inch thick before the toppings went on and it went in the oven; unfortunately it not only collapsed but got sodden and wasn’t as interesting as I expected it to be. The only place to appreciate the flakiness of the crust was around the edges. Maybe pizza is not the best way to experience malawach - they also have a malawach roll (wrap?), malawach plate and plain malawach.

My favorite items on the menu so far have been the cheesecake ($4.25 a slice) and spinach bureka. The full size burekas ($2.75) fill most of an 8" paper plate and are made with phyllo. They are also available in potato, mushroom and cheese and snack-sized for $.99 each. I’ve found the snack sized ones have very little filling and aren’t that satisfying.

They have many salads, pasta dishes, and fish, including fish and chips and Moroccan Style Salmon. Also egg dishes including shakshuka which is supposed to be the Israeli version of huevos rancheros. They have regular pizzas (9" and 12"), cheese, veggie, deep dish, stuffed crust and bagel varieties. The worst thing I’ve had was a reheated slice of veggie pizza which was badly over cooked and I’ve seen others served like that - if you want pizza here, get a whole one, not a re-heated slice.

The dining accommodations are very plain - there’s a counter and tables; often they set tables on the sidewalk outside but it’s a rundown, mostly empty shopping center with a pock-marked parking lot and there isn’t any view. Dining-in means paper plates and plastic utensils so mostly I’ve gotten take-out since the restaurant is less than 3 minutes from my house.

The restaurant is open at 9am until 7:30 or 8, closes mid-afternoon Friday and is closed on Saturday and was closed 10 days for Passover.

Being kosher it’s a bit pricey but it’s been very satisfying and since it's so close it works well for me; I can even hike it in nice weather.

UPDATE: Remodeled in 2011, there have been a lot of changes to the menu; there are pictures on the Facebook page.