This article was previously posted on an internet message board. I haven't been back to try this again nor found any others in Houston to try.

Jay Francis alerted me last year to his quest for the elusive Torta Ahogada in Houston. I had no idea what he was talking about until I looked it up. It’s a specialty of Guadalajara, a drowned or dipped sandwich, drowned in chili sauce. Yeah, that got my attention, too.

I found that they serve one at Paparruchos on Sage @ Hidalgo, just doors from Alexander the Great Greek Restaurant. I found a good description of what it’s supposed to be like so I headed over there to check it out. 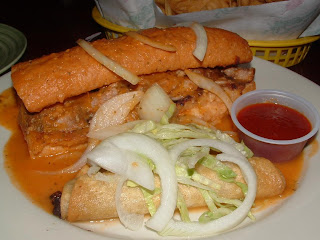 Just judging from this article I don’t think they’re using the right bread (birote) but it was a pretty tasty sandwich, soggy from the get-go, however. Lots of very tender pork in nice sized pieces, black beans, with a side of a black bean/lettuce taco which unfortunately also got soggy.

The basic sauce was mild (as was the restaurant's salsa) but the red sauce in the little cup added some heat, about the level of sriracha. I think if I try this again I would ask for both the basic sauce and hot sauce on the side and maybe a little more of the hot stuff.

Obviously I’m not an expert on this and would love to find more to try. It's been reported that a taco truck near Beltway 8 and Beechnut also serves one. I've been over there to look for it but couldn't find it where it was said to be. It was said to be mediocre, also, as judged by someone who's had the sandwich in Guadalajara.

There are other Mexican dipped or drowned sandwiches, known as Pambazos. I've had one of those at Mexico's Deli on Dairy Ashford although at the time I didn't know it was considered anything other than a variety of torta.

Paparruchos
Posted by Bruce at 1:55 AM

If you want to try another torta ahogada with the original bread crusty to prevent soggy bread,,look for the grand opening this month on 28542 FM 2978 RD The woodlands Montgomery County zip 77354.
Hope to see you there to hear you opinion!!