THIS RESTAURANT HAS CLOSED. 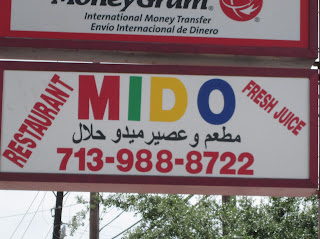 The menu board at Mido includes subs, sandwiches and burgers plus juices and smoothies and other items.  There are some familiar terms, some with amusing misspellings - kaboob, flafel, homace and hmmose, plus rotstry chicken and hollirotstry chicken - and also some unfamiliar names - Goss meat, Mekane, a Camekaaz sub, Tawook and a Fordsun burger among them.  I asked what kind of cuisine was served and was told ‘Turkish-Italian.’  Well, I think that’s what was said but maybe I heard it wrong.  I’ve identified most of the dishes as Turkish, Lebanese or ‘Arabic.’  Perhaps the ‘Italian’ refers to the subs, although subs are actually an Italian American creation, not Italian. 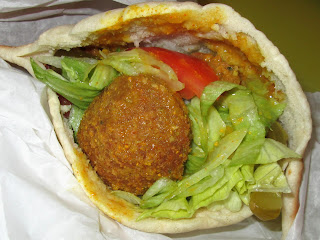 Prices are modest and I expected the sandwiches to be sized accordingly but prices are fair for what you get.  The Falafel sandwich was presented in an interesting purse-like bread I’ve never encountered before.  There were two falafel balls, one broken up inside the sandwich, plus lettuce, tomato, mild Middle Eastern pickles, maybe a couple of french fries,  a common addition in sandwiches here, and maybe a little bit of dressing, tahini or just mayo.  The falafel ball on top had absorbed a bit too much grease in the cooking but otherwise this was a very good sandwich.  I inquired about the bread and as best I could understand what I was told, this is considered neither a pita nor a pide but is a ‘special bread.’ 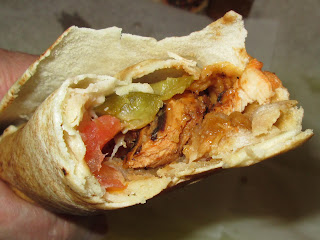 The Tawook sandwich was even better, presented in a thin pita as a wrap.  Tawook is the Turkish word for chicken and this was tender, juicy and flavorful chicken kabobs.  The pickle spears ran the whole length of the wrap (I like pickles - this was a good thing), there were a couple of french fries and a generous amount of roma tomato.  Again there may have been a little dressing, hard to tell.  If so it was pretty well overwhelmed by the juiciness of the meat, pickles and tomatoes. 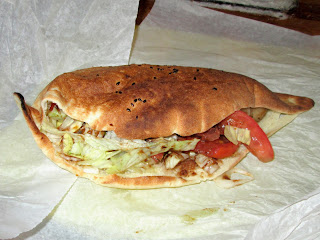 Goss is apparently another term for Turkish Doner because that’s what the Goss sandwich turned out to be, shavings of lamb and beef in a seeded version of the purse-like ‘special bread.’  Again there was lettuce and tomato and a couple of french fries plus pickles but the dressing was a big surprise, not a garlic or cucumber or yogurt or tahini sauce but a tart vinaigrette reminiscent of an Italian salad dressing. Edit to add:  I have learned doner in Denmark is also known as guss plus guss is the Iraqi word for shawarma/döner kebap, and it comes from the Arabic word for cutting (قصّ) 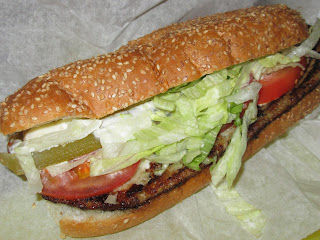 I had to try the Kamikaze sub, just had to find out what it was.  It involved a thin chicken white meat patty, not a flattened breast, on a very good sesame-seeded sub roll, with the usual fixings for a sandwich here plus a surfeit of mayonnaise.  It occurred to me this was a New Orleans style po-boy with it’s gobs of mayo, one of the signatures of a New Orleans po-boy to me, but with a chicken patty rather than the thin sausage patties of a New Orleans sausage po boy since Mido is Halal.  In this case, there was just too much mayo for my taste.

I also had to try the oddly named Fordsun Burger.  I was told it would include 2 kinds of cheese, peppers and onions.  Around here when you’re told a burger will have peppers on it you expect to find jalapenos or maybe roasted red bell pepper but this was green bell pepper and there were also mushrooms.  It was served on a large sesame seeded bun, a thin meat patty, nicely seared on both sides, and underneath the patty lettuce plus dollops of ketchup and mayo.  I can abide a little bit of mayo on a burger but ketchup is a real no-no and if I had known it was going to be included I would have asked for it to be left off.  With all the grease from the sauteed vegetables and the mayo and ketchup providing lubrication, this proved to be a very slippery-slidey burger.  Next time I'll be sure about all the ingredients when ordering a burger.  The Fordsun came with a generous side of french fries, perhaps as much as half a pound.

This burger perhaps gives a clue to the provenance of this little sandwich shop with the unique menu and breads.  Googling for the name you’ll find yourself looking at several listings in Dearborn, MI, the home of Ford Motor Co., which once upon a time made farm tractors.  In their later years of production they carried the Ford nameplate but in the beginning, in the early part of the last century, they were known as Fordsuns.  There is a Fordsun High School in Dearborn and also a Fordsun Halal Meat Market and a Fordsun Bakery.  Fordsun High was the subject of a documentary a few years back chronicling the exploits of its all Arab-American football team and another thing Dearborn is notable for is a huge population of Middle Eastern immigrants, said to be the largest outside of the Middle East.  Dearborn is also said to be home to a bevy of good Middle Eastern restaurants. I Googled on some of the unusual sandwich names at Mido also and found a couple of small sandwich shops in Dearborn with similar menu items including Kamikaze subs but no Fordsun Burger.

Mido is a one man show but the man who runs it turns out the orders quickly and efficiently.  There is a small, clean, well-lit dining area with four tables but otherwise pretty much bereft of adornment; most other customers I’ve encountered have been doing take-out. The rotisserie chickens have to be ordered in advance (allow forty minutes) and there is also a baked whole tilapia dish with ‘special rice,’ not listed on the menu but pictured on the menu board, which has to be ordered in advance.  The store is open 7 days a week starting at 12 Noon. 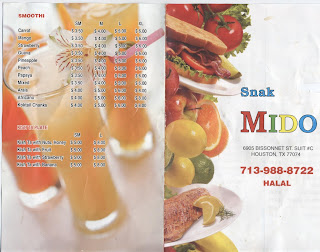 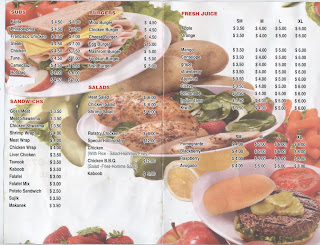 The printed menu has some different spellings than the menu board - Mekane, for instance, becomes Mekanek, a reference to the Lebanese sausage.  Some of the items, including most of the juices and smoothies, the Kishta plates and the ‘Liver Chicken’ sandwich are not being offered currently due to the perishable ingredients necessary and the as yet very small customer base.

Prices and dishes may, of course, differ at the restaurant.
Posted by Bruce at 9:22 PM 2 comments: