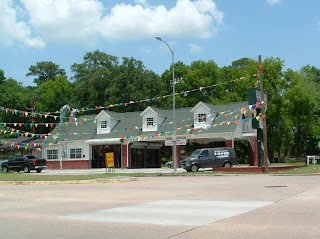 SO FAR AS I KNOW, THIS PLACE IS CLOSED FOR GOOD.
Barbecue afficionados in Houston are still mourning the loss of Williams Smokehouse which burned in December but there’s light on the horizon and, as it turns out, the horizon is only a couple of miles away.

Pierson & Co. Bar B Que has opened on TC Jester at Mansfield, just north of Tidwell. Mansfield is the same street that Williams was located on at the intersection of Wheatley.

Pierson’s has only been open a few months but Clarence Pierson learned barbecue from a man in New Iberia as a teen and has been at it ever since. He briefly operated a place on Houston’s southwest side up until a couple of years ago.

It’s a family operation and the Pierson’s are very nice folks. They’re being very generous with the free samples these days and portions are very generous. 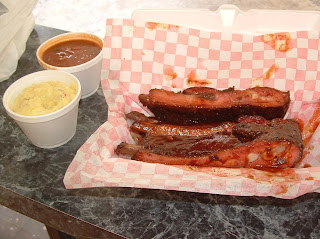 This is East Texas style barbecue which means the meats are very tender and there’s a little brown sugar in everything, beans, potato salad, sauce, even the rub. Mesquite wood is used exclusively.

I haven’t cared for the potato salad – too sweet for me – but the beans, kind of like Boston baked beans but with some meat, are awesome. They could be served as chili, in fact and a large order could be a meal in itself. I understand they’ve added cole slaw to the list of sides but I haven’t sampled it.

These meats were photographed at home about an hour and a half after they were sliced so they look a little dry. That’s sliced beef on the left, pork butt in the center,
and all beef sausage on the right (with a good crispy natural casing). Note the depth of the smoke rings. The brisket and sausage are excellent. I persuaded Mr. Pierson to cut me some pork even though he said it wasn’t ready yet and my guess is it’s going to be some of the best in town. He does plan to offer pulled pork sandwiches as well as sliced pork.

Home-made desserts include peach cobbler (excellent) made from a recipe by Clarence Pierson’s 90 year old mother in Crockett and bread pudding, which I haven’t tried.

The times I’ve been there’s been limited accommodations for dining, a narrow counter along one wall and a few stools (see the picture, above), but I believe they have added some tables. Plans are to enclose the drive thru areas and add more tables and pave a parking lot out back. There’s also a nice park along TC Jester about a mile south with picnic tables for those driving from far away.

I’ve never been quite as fond of East Texas style barbecue as opposed to Central Texas (smoked meats) style but Pierson’s is the best of this style I’ve ever had and it could change my mind. This is a very welcome addition to the Houston BBQ scene. The brisket is better than William’s was in my judgement, and the ribs, while not the equal of Williams’ (few places in the world were), are very good, and the sausage is much better than Williams’ and you can get it all without a heaping dose of attitude as sometimes encountered at another famous Houston Q joint.

CORRECTION TO THE ABOVE: Pierson's now has a website and Clarence Pierson says he learned barbecue from a man from New Iberia here in Houston. He's a native of Houston himself.

Based on your recommendation, I visited Pierson's while in Houston this weekend. I was not disappointed! They asked if it was my first visit, I told them yes. Samples of their brisket, sausage and pork ribs - and peach cobbler - quickly followed (I had already ordered a brisket sandwich). Talk about good customer relations! You weren't kidding about the meat being tender! In fact when I was finished, Mr. Pierson invited me back into the kitchen to show me the smoker. He told me the brisket smokes for 16 hours. No wonder it was so tender. I will be sure to visit them again when I return to Houston next year. Now, as for Christian's Tailgate...I'll put up a comment there about that visit.

I haven't been in several months - glad to hear they're still doing the free sample thing, though. When they first started I thought that would just be a 'limited time introductory offer' type deal but they're just genuinely nice folks who are very proud of their offerings. Glad you liked it.

I haven't tried this establishment but if you want links that are near what used to be served long ago at places such as the now defunct Green's BBQ you should try Powells BBQ in Sunnyside.

Thanks. I've seen that place but I wasn't sure it was in business. I'll have to check it out.