I’ve been looking for a place that does great pollo asado on the southwest side for some time, hopefully some place that does as awesome a job with the dish as the El Norteno taco trailers and busses along Long Point, north of I-10. I’d passed by Makro Chicken many times, just north of Bellaire on Gessner, where the large signs proclaims Pollo Asado - Charcoal Chicken - and Open 24 Hours.

It’s a much nicer restaurant on the inside that I expected for that somewhat trashy looking strip center. There were some trappings of a stage and equipment for live music and interesting decor on the walls; the restaurant would not be out of place along the trendy Washington corridor. I noted as I entered the hours posted on the door indicate the restaurant is not open 24 hours except on weekends.

Pollo Asado is the main offering but not all there is to the menu; there are also some Colombian and Salvadoran dishes (tamales, curtido). I got the smallest order of chicken, 1/4 chicken, 2 pieces, plus 3 sides for $4.99. There were 15 sides to choose from including regular or Mexican rice, frijoles rojos o ranchero, new potato, casava fries, plantanos maduros, tortilla, arepa or biscuit, tomato soup and mixed vegetables, among others. The chicken was okay, juicy and flavorful, but not as good as that from El Norteno; the sides were also only okay. The vegetales in particular were disappointing, apparently nothing more than generic, chopped mixed veggies from the supermarket freezer case, steamed or boiled without any seasoning or sauce.

While I was waiting for the food to go, though, I saw a poster on the wall for a Bandeja Paisa, the Colombian national dish. I searched the menu board for it but could not find it, nor was it apparent on the more extensive menu you get if you dine in, so I asked the sole waitress. She spoke little to no English but she ran around the counter to point at the poster and when I nodded ‘Yes’ she then pointed to the entry Makro Montanero on the printed menu. So, yet another name for this dish. 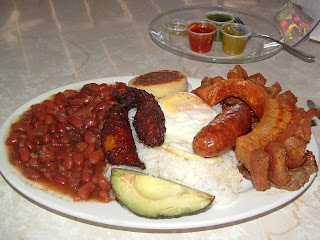 On a subsequent visit I had to try their version. It came out looking exactly like the picture on the poster and was very good. It was a generous amount of food for $7.75. The chorizo was particularly tasty, a finer grind of meat than other Colombian chorizos I’ve encountered and savory but not spicy. The very smallish piece of skirt steak, however, was a little mushy, like it had been tenderized with Adolph’s perhaps, and not very flavorful.

A note on the salsas - I don’t know why this was included with the bandeja, Colombian food in general is not spicy. The best of the 3 was the bright green one, which was like a good pico de gallo. For the order of Pollo Asado to go, I gotten just one salsa and I had chosen the bright green one; it proved to be the best choice.
Posted by Bruce at 9:33 AM