A couple of months back I became obsessed with finding a good Italian sub in Houston, a mostly frustrating endeavor.  In my wanderings I happened across mention of this place, a purported Italian deli in Stafford.  Seriously?  We’re not exactly teeming with Italian delis in Houston but Stafford?

It turns out I had seen it before having been in the convenience store in the strip center a couple of times, but never checked it out.  It was always closed when I was there and nothing in the strip was very promising.  I was wrong, of course.  Once I looked it up online the menu and reviews were so appealing I had to rush right over.  Now I’m seriously p.o.’d this place has been here for almost 30 years and no one has ever told me about it.  It’s not exactly a secret, though.  It’s packed for lunch every weekday, laborers, business-suit types, suspected pols, groups of people in scrubs.  It’s obvious there are lots of regulars.  It’s cramped on the inside with barely room to pass another person in the line back to the counter where you order.  A hard working, very efficient kitchen staff turns out a lot of food in a small kitchen in a timely manner including lots of take-out orders which is what I’ve done several times. 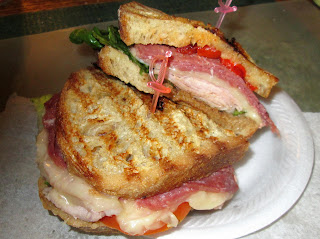 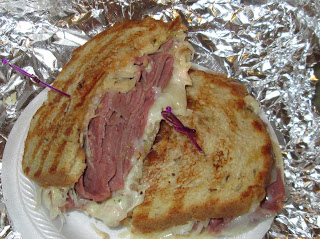 Most of what I’ve had has been very good such as a sandwich special of a Hot Italiano with Black Forest ham, provolone, salami, roasted red bell pepper, tomatoes, romaine, kalamata olives, olive oil and balsamic vinegar on rosemary sour dough bread and a very credible, reasonably proportioned Reuben, although unfortunately with just lean brisket.  The only thing I’ve had that didn’t impress was a soup and sandwich special of a spicy sweet potato and peanut soup that I found boring (and a humongous portion) and a half muffaletta. 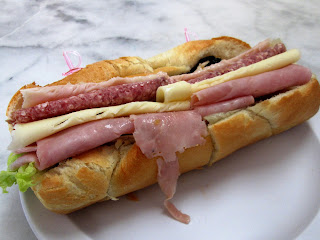 Their Deluxe Po Boy is not made of the classic ingredients of an Italian sub but was one of the best of this general type of sandwich I had out of almost two dozen I tried working through my obsession, loaded with better quality meats than most places use and on a very good, light baguette.  And while some places, especially the sandwich chains, load you up with filler like shredded lettuce and tomato slices on an Italian and are kind of skimpy with the meats, this place is just the opposite, loaded with meats and kind of skimpy on the condiments.  It was just a little bit dry, needing a bit more of the vinaigrette.

I have yet to try any of the pastas or salads but what I’ve seen others digging into has looked very good.  So score one for the burbs.  While the sandwiches don’t quite measure up to Local Foods in the Village or Revival in the Heights, this place would be a welcome addition to any neighborhood in town.

Fresh and Savory
Posted by Bruce at 12:01 PM No comments:

All over the area the food scene in the burbs is taking off.  Sugar Land, Katy and The Woodlands have all been noted but you don’t hear much about Stafford except maybe on this blog.  While there are no celebrity chef-driven restaurants in Stafford yet, over the past year I’ve been pleasantly surprised  by the food and the diversity of ethnic cuisines at numerous restaurants.  The little stretch of Dulles just south of US 90-A, the continuation of South Main Street from Houston if you’re unfamiliar, has undergone a remarkable transformation in just the last few months with new outposts of Chinatown stalwarts Don Café and Parisian Bakery and Sandwiches and this new Filipino bakery and café.

I’ve eaten at a half dozen Filipino places around the southwest side of town over the last couple of years.  I can’t claim any great love of the cuisine nor knowledge but every time I see a picture of pancit, I want it. It’s the rice noodles that ring my Pavlovian chimes and so it was that after coming across this place online I immediately shelved my plans to try a North African version of pizza and headed down to Jambeto’s for dinner one night. 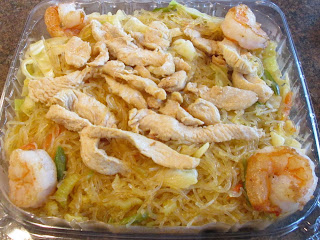 There was some miscommunication and they fixed my order to go but no problem, I just settled into one of the handful of tables and dug in.  It’s a small place with a very small café menu, perhaps more of a bakery than a café, stylish and spic and span in a brand new strip center across from Dulles Hi.  There are a half dozen varieties of pancit on the menu, I went for the recommended chicken and shrimp but next time I think I’d just opt for the shrimp.  Not that there was anything wrong with the chicken but why pass up the opportunity for twice as much shrimp?  The dish included green beans, cabbage, carrots and celery and came with a calamondin and a packet of soy sauce and there was banana sauce on the tables, too.  Apparently you can eat the whole calamondin, skin and all - I did not know that.

The empanadas here are snack sized, smaller than a golf ball, and are baked and there are some other tasty looking snacks including lumpia.

I haven’t had much of a sweet tooth for several years now but that has been changing of late and I spent several minutes drooling over the pastry case.  Next time, one of those cakes or some cookies is going home with me.   Check out there Facebook page for more pictures.