NOTE:  THIS UNIT HAS BEEN REPLACED BY A SIMILAR VENDOR CALLED CARRITO CUBANO. 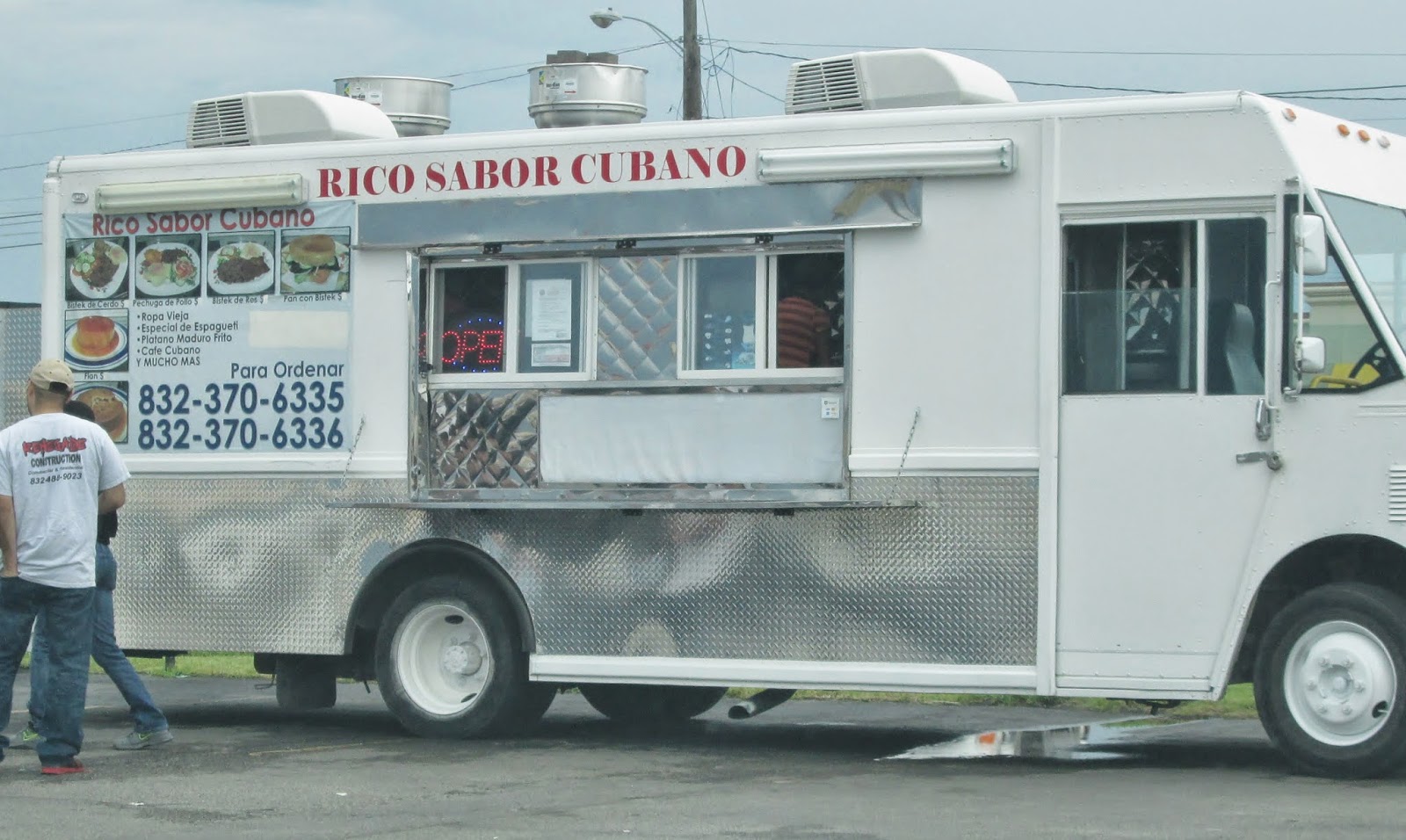 Most Fiestas have FPF (freshly prepared foods) options, either indoors or out.  This huge store, which I think of as the Mother Ship even though it wasn't the first one, has 4 indoors and 2 semi-permanent stands just outside the front door.  Now, add this mobile unit out at the edge of the parking lot, along Hillcroft. 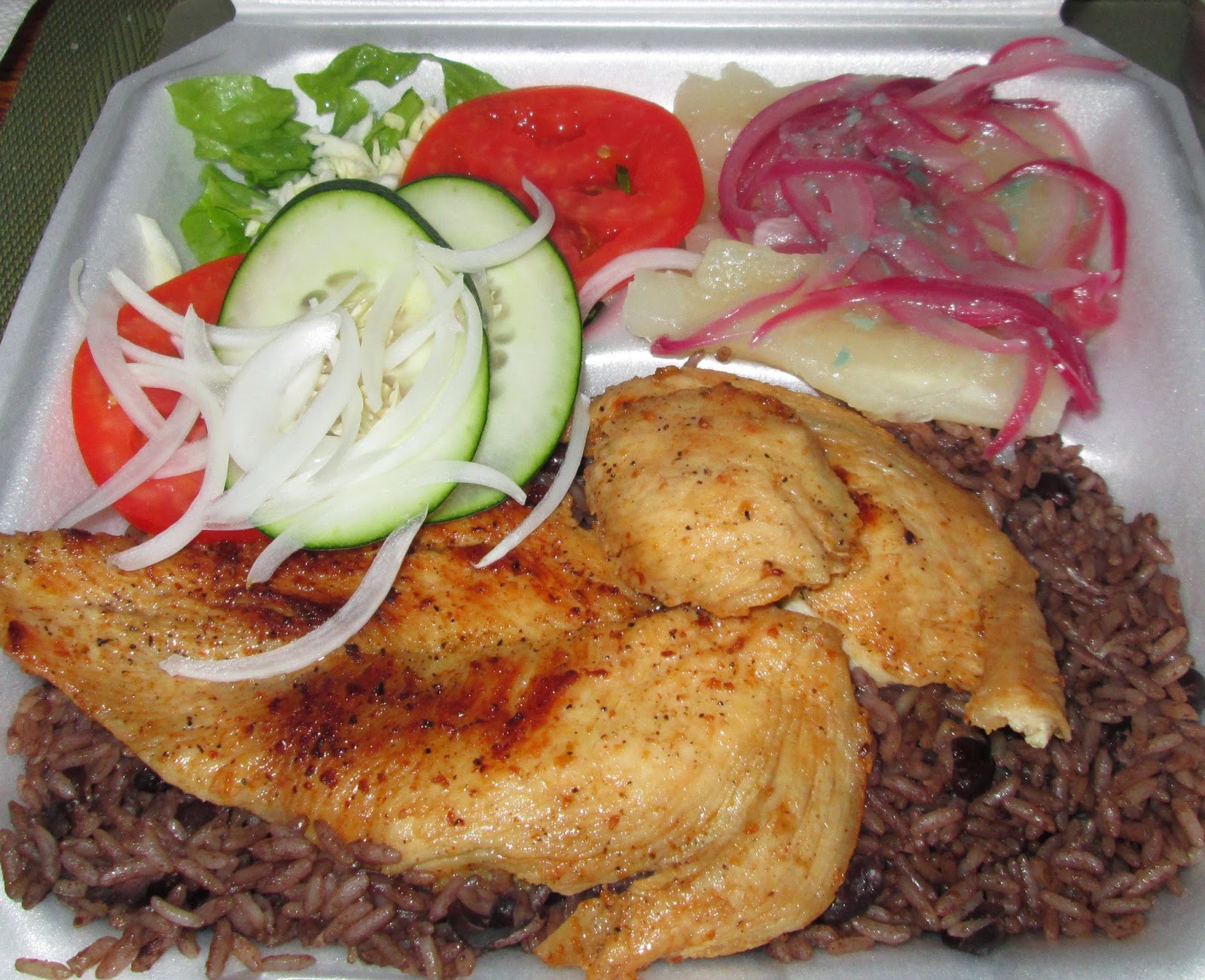 They were doing a good business during the lunch hour when I checked it out.  The Ropa Viejo was not ready yet, unfortunately, my first choice, so I went for Pechuga de Pollo ($8) which was described as 'fried'  - everyone on the truck was very friendly but none speaks very good English, a little problem for me as my Spanish has gotten rusty since I haven't been frequenting taco trucks and taquerias much for a couple of years..

The chicken breast was served on a bed (about 2 C) of Moros y Cristianos (black beans and white rice cooked together) with a salad of tomato and cucumber slices, shredded onion and cabbage on lettuce leaves, and with a side of stewed yuca topped with shredded, marinated red onions.  A very vinegary hot sauce was offered as a condiment. 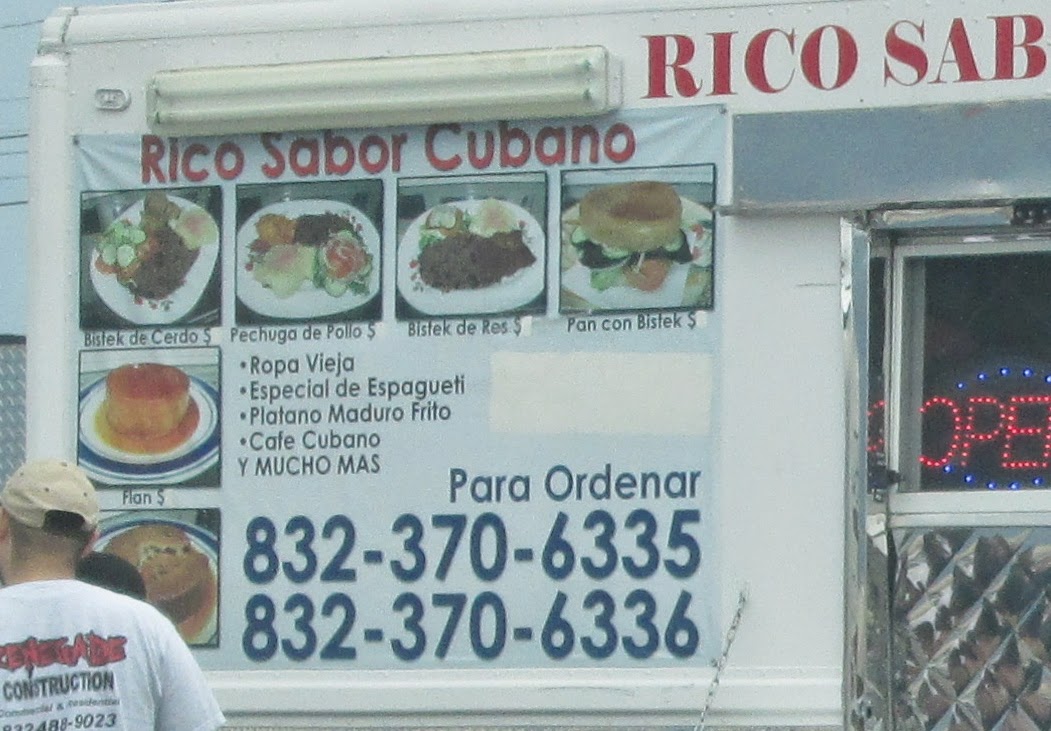 What? No Cuban sandwich?  One will be added soon, I was told.  The proprietor has gotten numerous requests for one.  Belated note:  The Cubano sandwich is an American invention.  As these operators, and the new ones at this location, seem to be more recent immigrants, it's not surprising they don't have one on the menu.

And I will be back to try it out.

I've been watching this garden grow for a couple of years now whenever I drove over that way.  In the beginning it seemed to be just one man with a tractor.  It grew to cover what must be close to an acre but only occasionally did I see more than one man working it.  I assumed it was an Urban Harvest garden and have intended to stop and ask about it some time but never got around to it.  Recently they started selling produce from a little street side stand. 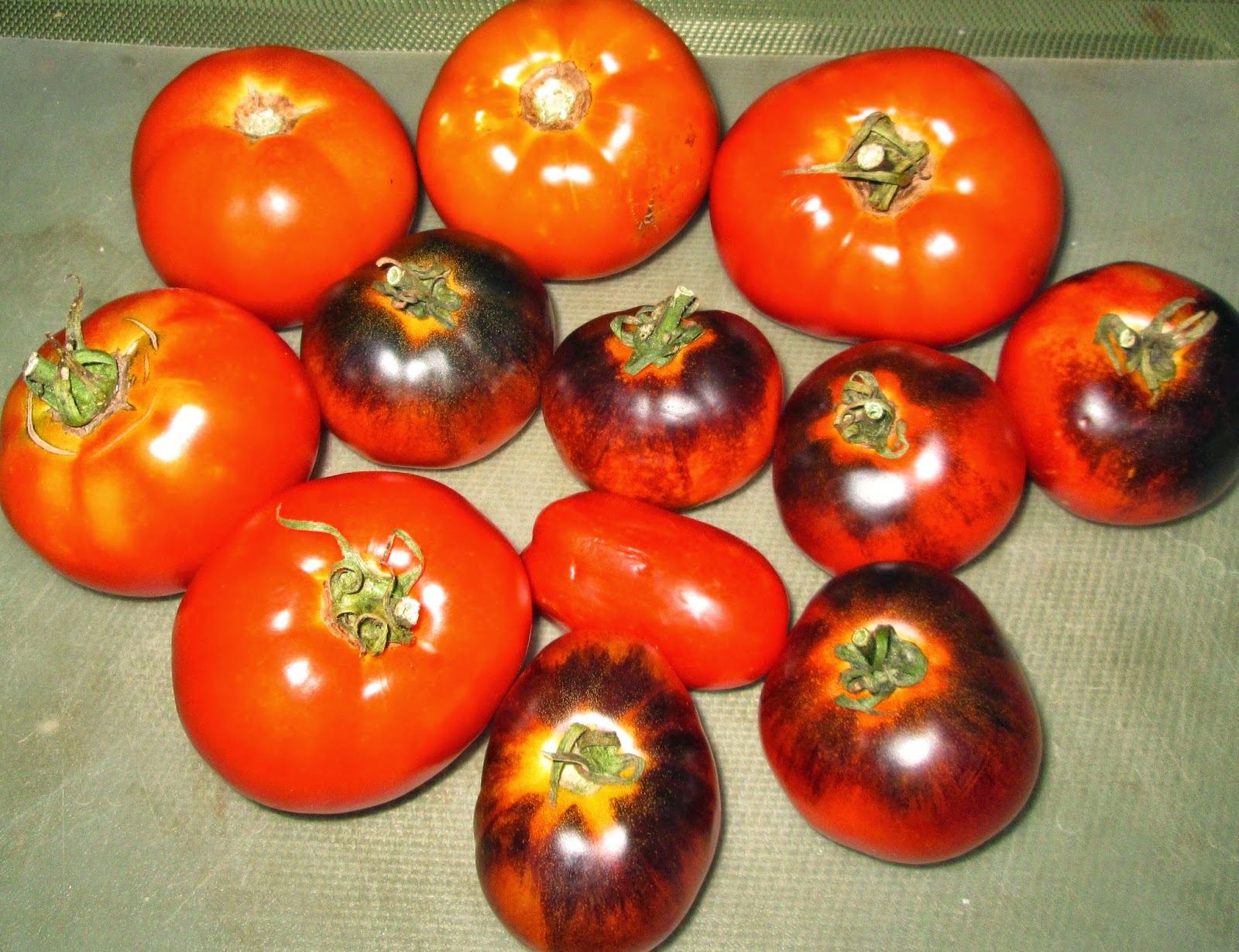 I got some great tomatoes on my first visit - it's cash only and I didn't have much with me.  The smaller ones were better than store-bought but not all that flavorful and even a little over-ripe but the bigger ones, when they finished ripening, were as good as any I've ever grown at home back when I had a garden.

I wasn't able to learn anything about the garden on my first visit because of a language impasse but I guessed it was being run by one of the African churches in this part of town.  On a second visit I learned this is one of the Plant It Forward Farms organization's sites, in conjunction with Urban Harvest.  According to their website they also have a garden at St. Thomas in Montrose and just off South Hillcroft, just inside South Main.  The purpose of the organization is to provide economic opportunities for refugee families and the produce is pesticide and chemical free. 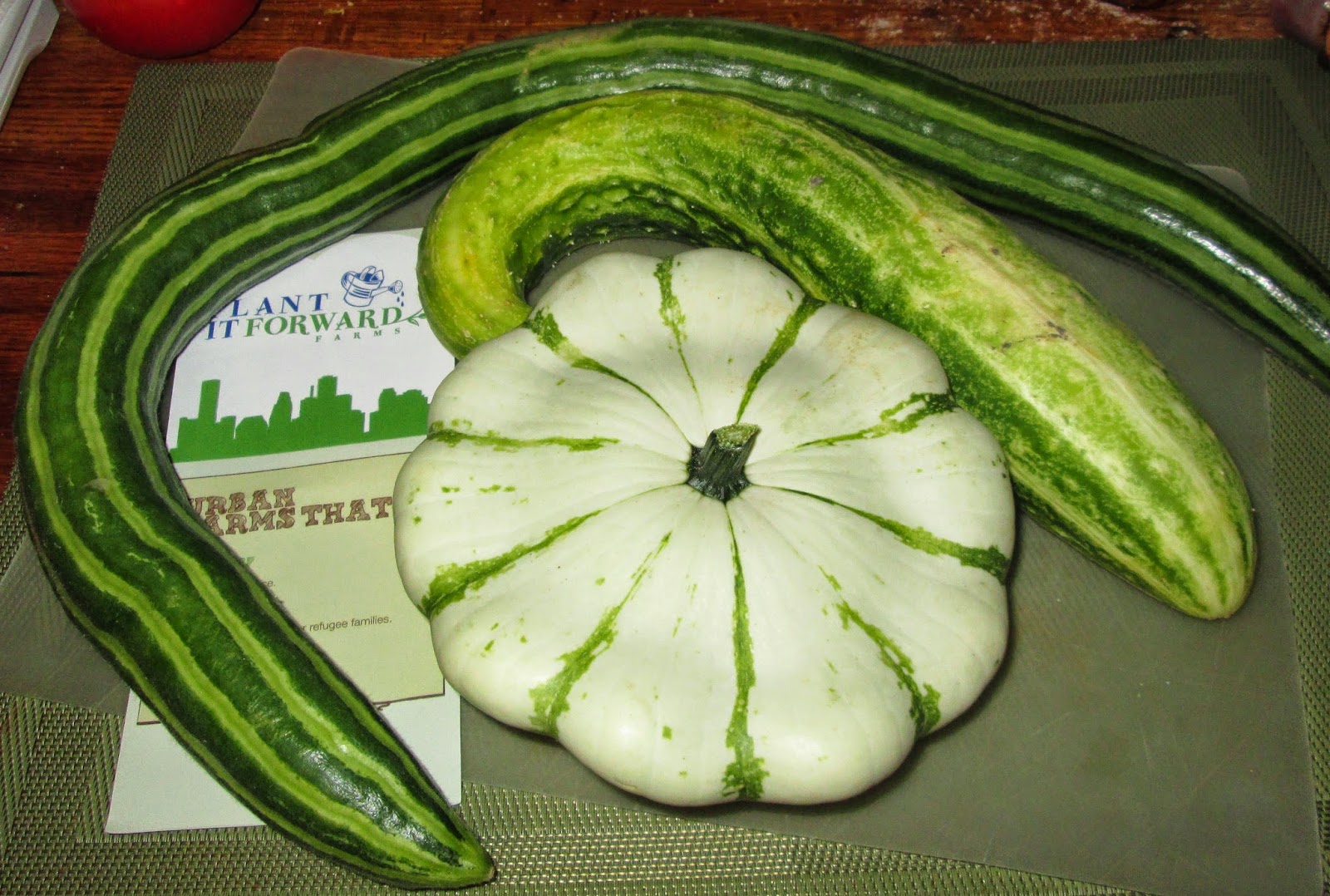 I picked up some cucumbers and a flying saucer squash on my second visit (still had plenty of tomatoes).  That squash - 7" in diameter - was small compared to one on display my first time by.  The long, snaky cucumber was labeled Suyo Long but it doesn't look like the one's I've found online by that name.  It has a mild, very slightly sweet taste and is excellent.  I haven't managed to finish it off yet and start the other one (which weighs 1 lb, 7 oz).  There were also what I assume to be large pickling cucumbers, just one of which would be large enough to make a pint of pickles.

Produce from Plant It Forward is available at the Eastside Farmers Market on weekends, by CSA subscription, and from the farm stands when they're open.  The sign on my first visit said the hours were Tuesday thru Sunday, 2:30-6:30 but on the second visit, it read Tuesday thru Sunday, 11:30 to 2:30, so I guess those are new hours.

This is a very welcome addition to this part of town.

Plant it Forward Farms
Posted by Bruce at 10:01 AM No comments: 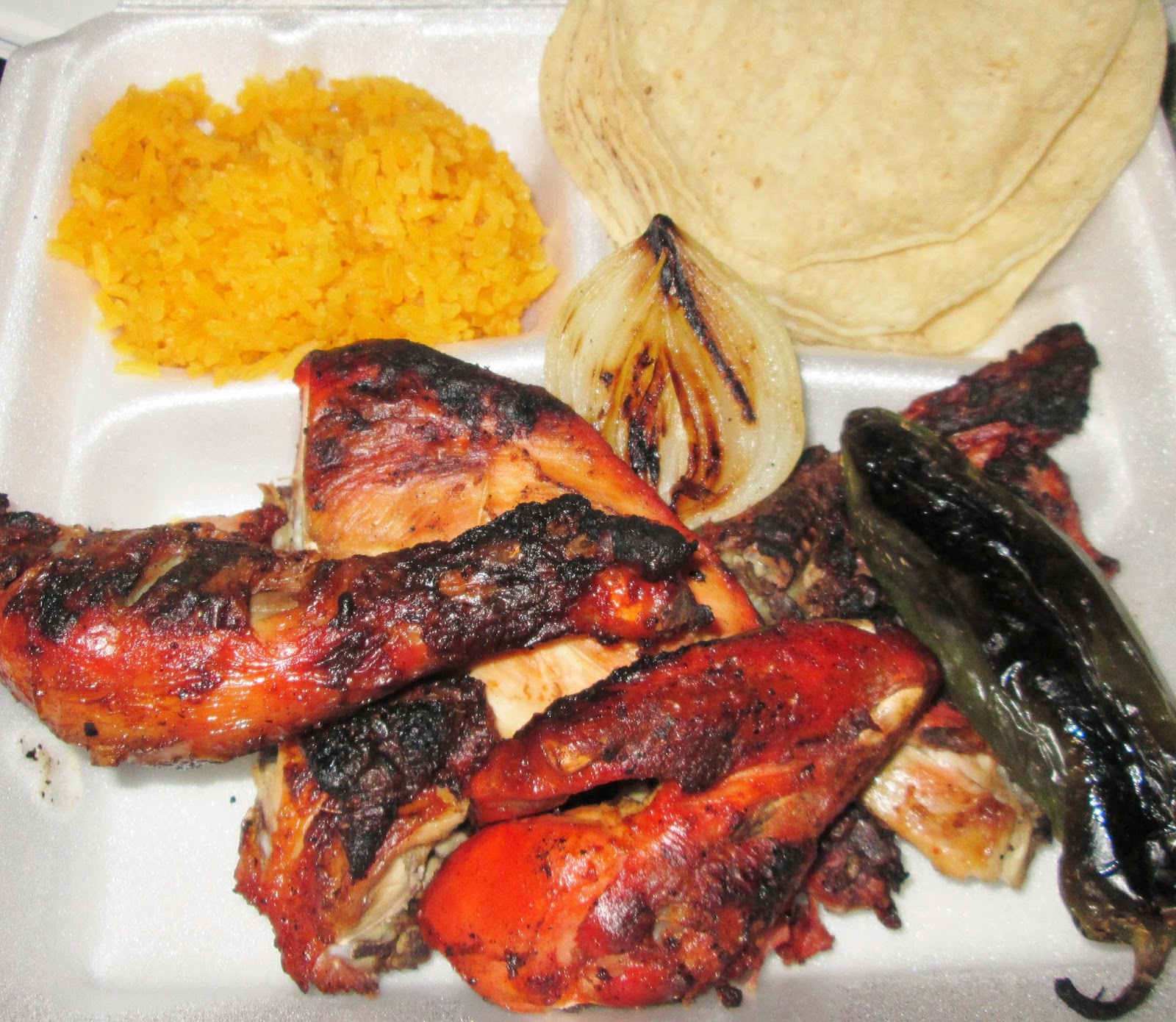