The Monster PBJ truck had not been high on my list of food trucks that I wanted to check out but then I saw the truck parked at the CAM and I couldn't resist. 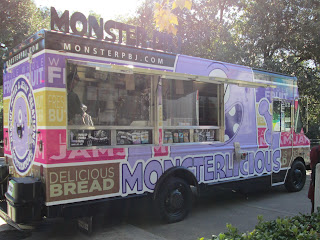 Well, seriously, who could possibly resist a custom-made peanut butter and jam sandwich from a big purple truck?  Kudos to the owners of the truck for the big picture windows so you can see what the crew is doing, not to mention how spic 'n span and orderly everything is.  Many's the time I've been standing around, waiting for my order from a food truck, and wished I could see what they were doing with my food in there.

I filled out the order blanks on a paper bag and turned it in, then stepped back to await my delights.  A young mother with a child who probably was not yet in kindergarten was also waiting,  When his name was called, the little boy ran to the window and stood on tippy-toes, reaching as high as he could to receive his bounty, then strutted back to his mom, looking like the happiest kid in the world.  Good job, Mommie, for introducing your child at at early age to the pleasures of the Houston food truck movement. 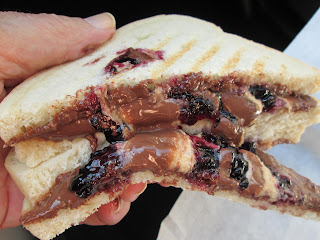 I chose cashew butter.  I was going to try to keep it healthy with sliced bananas but that purple color took hold of my mind again and I went for blueberry jam (blueberries are really purple).  I also added the  Nutella.  When I got my sandwich I hurried off to my car, smiling as grandly as that little boy.

The bright sunlight had made it impossible to get a picture of the truck without some glare and the bright sunlight and dark shadows filtering through the trees overhanging the street in the museum neighborhood made it impossible to get a picture of the sandwich that would be usable without holding it down near the floorboard of the car (my new camera doesn't handle big contrasts in lighting well).  It was rather a messy situation but I managed to avoid getting jam and Nutella all over the upholstery and dug right in, polishing off the sandwich very quickly.  Then I remembered I had intended to drive over to Cherryhurst park, around the corner from where I used to live, and have a little picnic under the trees.  I was so excited I just couldn't wait.

I could have used a little more toasting and I could barely taste the cashew butter for the richness of the jam and Nutella but the sandwich was great nonetheless.  I drove home in a state of bliss, sure of a simple and abiding truth:  the PB & J is one of the greatest culinary inventions of all time.

And Monster PBJ does it justice.


I think we have a pretty impressive array of food trucks serving various national cuisines, not even counting all the 'fusion' food trucks (how many Korean-Mexican trucks do we have now?).  My own list on this blog is woefully outdated and needs some editing but I'm happy to add the Jeepney Truck to the roll call. 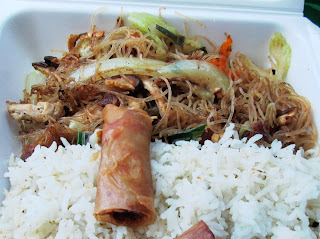 I tried the Pancit - noodles, chicken, sweet Chinese sausage and vegetables - plus garlic rice and lumpia and a choice of sauces.  I chose the 'hot' sauce which I think was sriracha or something very similar.  I still don't know much about Filipino cuisine (I've had it a half dozen times at four different places now) but I thought this was very good except for the lumpia which were quite greasy.  The vegetables were not overcooked, the rice fluffy and very garlicky.

I caught up with them outside the Cultural Outreach Center of the Philippine Consulate on Highway 6 and they were very busy with families ordering multiple to-go items.  It took 35 minutes to get my food. 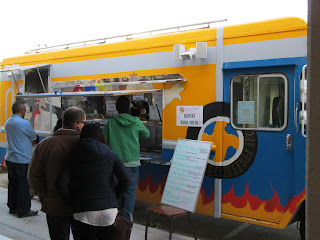 I was disappointed the Jeepney Truck was just a step-van instead of a re-purposed Jeepney and they haven't had many stops so far but I'm looking forward to catching up with them again and trying more of their offerings.