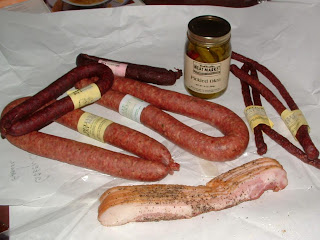 Note: This review was published previously elsewhere and I'm merely copying it here to bring it together with my other sausage maker reviews. I've still only been to this place once and haven't purchased any other Poffenberger sausages so I can't add to the review.


This is just a quick review as I’ve only been to this place once. I first became acquainted with Poffenberger’s several years ago when I came across some of their sausages at Hinze’s BBQ in Wharton. I particularly remember the black pepper encrusted summer sausage that was very good but that is apparently no longer made. Their summer sausages now are 22 oz chubs in either plain or with cheese and jalapeno.

I picked up some dry sausages, beef sticks and two of their smoked sausages, the pork with green onion and pork with garlic. Both the latter were excellent. In fact I liked them so much I included them in my Christmas spread. The garlic is apparently their oldest and best selling product. Both had a good smoky flavor and the casing crisped up very nicely but they are not ‘wet,’ i.e., fat doesn’t squirt out when you bite into them. I found their beef sticks and dried sausages to be a little too dry and tough, however. Their cheese and jalapeno summer sausage won a Grand Champion award from the Texas Meat Producers Association for 2007 but I like the one from Maeker’s in Shiner better than Poffenberger’s and I like the dried sausages from both Maeker’s and Patek’s in Shiner better. I liked the beef sticks from Vincek’s in East Bernard better than these, too.

There is a large assortment of other products including bacon, home-made jellies, and canned vegetables. I picked up some pickled okra that is quite good although I wish they would use cold brining. I noted chipotle olives, too, but got distracted looking at all the other goodies and neglected to pick some up; they also have home-made pies, pastries and bread.

There also is barbecue, although perhaps only for lunch? I didn’t smell any or see anybody having any and I didn’t try any.

The place is impossible to miss as you go through Bellville on Texas 36; you’ll come to it on the left before you get to the downtown section if you’re going out from Houston. Poffenberger’s summer sausages are available at Spec’s Liquor warehouse in downtown Houston and some of their products are reportedly carried at Hebert’s Specialty Meats on Richmond.

Poffenberger's sausage is served at 3P's Barbecue on S. Gessner in Houston.

Just happened to turn the corner and found it. Had to stop. From Wharton but now live in N. Carolina. Had to have some Texas! Brisket good. Jerky hard, Beef smoked sausage, good but like coarse ground. Casing is tougher than I like. East Benard has better. Miss the Texas food. This N. Carolina stuff sucks.

I'm with you on liking the stuff from East Bernard better. I haven't tried any bbq at Bellville.

Great site. I guess my tastes are a bit different in that I prefer Poffenberger's fresh sausage and summer sausage to the others. Don't get me wrong, the other guys have great products but I prefer the flavor of Poffenberger's. One big difference is they use lean pork. Sausage by nature has a lot of fat in it but the use of lean pork enhances the flavor. Lots of my friends drive for many miles to have deer processed by the Poffenberger family every year. It is hard for me to drive through Bellville with stopping for a BarBQ sandwich with lots of pickles and onions. best To everyone. Greg