I've been going down to this Indian grocery for a couple of years now.  It's neat and very well stocked.  The staff is always very friendly and helpful; browsing the shelves is likely to attract attention and an offer to help in just a few minutes.

The produce line-up is good looking.  I'm drawn to the home-made yogurt but there are other home-made goodies available including several ladoos that I haven't tried yet. 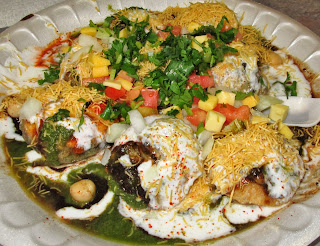 Another attraction is the snack bar in the back of the store.  There's an extensive menu - I think it's all vegetarian - and I try to go when I'm hungry so I can take advantage of the offerings.  The plateful of dahi puri had at least nine puris, seemingly immersed in date/tamarind and mint chutneys, topped with yogurt and garnished with chickpeas, diced tomatoes, raw onions, mango and cilantro with a sprinkling of sev.   Ask for it spicy and they will comply and it's like a civil war in your mouth.  I've also had samosa chat and one of the lunch plate specials.  Dine-in accomodations are modest - 3 small tables - but some of this menu wouldn't travel well.

A Yelper has posted photos of the menu on the wall and in a departure from the usual, the pictures are clear enough to be read.  There are nine varieties of naan including red chilli naan and pineapple naan.  I've noted Khandvi and Khaman by the pound.  I've been wanting to try both these but not sure if I want to buy a whole pound.  I think the Khasta Kachori is a newer addition.
Posted by Bruce at 10:44 PM No comments:

Openings and Closings on the Southwest Side


Bansuri Indian Food Corner is currently closed and will be re-opening in Sugar Land.  The way I read the announcement on the website, it seems they're going all brick and mortar on us eventually.

A new truck has been parked in Bansuri's long time spot on S. Wilcrest, Yashoda Chat Express, and has a menu posted that is very similar to what Bansuri offered.  I haven't caught it open yet.

The Chili Shak, Fondren at S. Braeswood has closed.  That is a location that has failed a couple of times now.

Yemeni Cafe, Beechnut at Wilcrest, has closed after only a few months.  The restaurant was a long way from where most of the Gulf States expats reside in Houston and drew little attention, I enjoyed a Fattah Lahm and some Yemeni tea there before it closed.

Mo's Knock-out Grill in the Medical Center area has closed.  I'm very sorry to see that one go.

Edit to add:  Pupusa Baleada Buffet has been open for several months at 7303 Bissonnett @ Lugary, apparently riffing on the success of the Pupusa Buffet restaurants on the SW side.  Actually a baleada buffet sounds like a good idea, I much prefer the Honduran over the Salvadoran specialty.  I haven't been.
Posted by Bruce at 1:38 PM No comments: