I got into summer sausage as a snack a few years ago while trying the Adkins Diet and discovered some very good ones from our Texas sausage makers, much better than the nationally distributed ones like Hormel and Armour. I wasn't that impressed with the more widely distributed Texas brands, Burton and Blue Ribbon (just guessing on distribution here) but Chappell Hill and Holmes both make very good summer sausages and that’s only the beginning.

J Bar B out of Waelder makes a good one as I recall though I’ve only been able to get my hands on it twice (at Fiesta in Houston). J Bar B also produces the Earl Campbell brand but I didn’t care for that one very much. Eckermann’s from New Ulm also has a pretty decent one. Eckermann's may be available at Super WalMarts.

Still, I preferred to seek out the even smaller producers, some selling only on 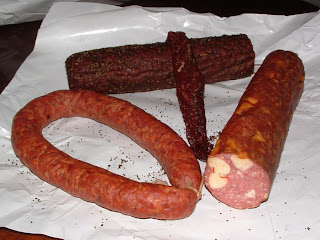 premises at small town butcher shops, smokehouses and meat markets. I really liked the 3 varieties from Vincek’s Smokehouse in East Bernard, regular, hot pepper cheese and black pepper encrusted, especially the pepper cheese one. They’re larger than usual. The picture shows a beef and pork link, black pepper encrusted summer sausage, hot pepper cheese summer sausage and a solitary piece of peppered jerky. I like to zap the cheese one briefly in the microwave until the cheese starts to melt and the fats run a little.

I also had a very good one several years ago that I found at Hinze’s Barbecue in Wharton, Poffenberger’s from Bellville Meat Market but haven’t seen it there since. It was an awesome black pepper encrusted one but apparently they’ve dropped that variety from their line. Poffenberger’s jalapeno cheese variety won a taste test last year but I have a couple of others I like better. 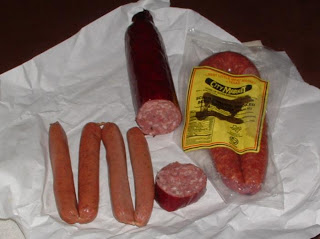 City Market in Schulenburg produces an unusual summer sausage that technically isn’t a summer sausage since it requires refrigeration. It includes beef and pork heart and brown sugar, among other things, giving it a flavor reminiscent of maple smoked bacon. Not my favorite but very good.

Jr.’s Texas Best in Mackay, on US 59 just north of El Campo, has several varieties, including a venison, cheese and jalapeno that is good. That’s the only one of their’s I’ve tried but I believe they also have buffalo summer sausages.

The best I have encountered is the jalapeno cheese summer sausage from Maeker’s in Shiner recently and it is excellent.

And then there are the dry sausages, and jerkies, and......it’s a rich field in which to indulge your taste buds.

See also the reviews of Maeker's and Vincek's on the sidebar.
Posted by Bruce at 8:37 AM