Cruising for Street Food: South side

I spend some time on the south side occasionally, around South Post Oak, Hiram Clarke, West Orem and West Fuqua, as well as passing through the area occasionally. It's an interesting area; most of the brick and mortar restaurants are not listed on b4-u-eat and there are sure to be some neighborhood gems. I've noted many mobil units, especially along S. Post Oak where I've seen as many as 9 on one trip, and stopped at several. Many stay only a short time, others have been there for as long as I've been passing through the area. One reason possibly is the presence of a commissary just north of W. Orem on S. Post Oak, one of the places where the units have to go for cleaning and restocking. This is a list of the most recent inventory that I've observed.

Taqueria Don Felix @ Allum - this one may not be operational

Tacos and Burritos To Go @ Brookstone - never seen this one before

Pupuceria Ramirez - just north of W. Orem; I've reported on this one in Quick Bites IV. Recently it has not been open when I've been down that way. UPDATE: Missing for several months, this one has been replaced by a trailer (perhaps the same one re-painted) named Pupusas y Tacos La Benedicion.

Taqueria Ayala Pollo Asado and Esparza Pollo Asado - dueling pollo asado wagons across from each other at W. Orem and S. Post Oak. I've stopped at both and wasn't very impressed. The aroma from Esparza often wafts across the intersection and is very enticing but I found the chicken to have an unpleasant metallic taste.

There is a no-name Taco & Pupusa truck @ Heatherbrook. I’ve been down this way frequently in the last year and there is almost always a unit at this location in front of Variedades Sinai Pupuseria but they have changed several times.

Tacos Don Beto DF - @ Grapevine; this was reported on also on this blog on Quick Bites II at another location.

Taqueria Tacoocho - @ a Conoco station @ BW 8, reported on on this blog. 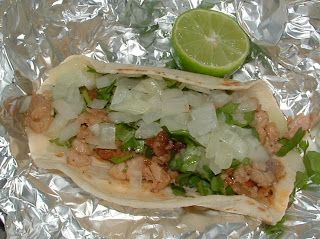 Taqueria Salmanca - BW 8 @ S. Post Oak, across Post Oak from Tacoocho, mentioned in the report on Tacoocho. I tried just one item, a taco de mollejas.


At West Orem @ Hiram Clarke is a unit with the intriguing name Taqueria Los Mangos de la India Bonito. I've seen it there for a long time but it seldom is doing any business. Despite the exotic name (India in Spanish should refer to the West or East Indies, not India the country) there is nothing on the menu that is out of the ordinary for a taco truck.

W. Fuqua @ Hiram Clarke - Taqueria D’Molkas - appears to be a brand new unit with a ‘grand opening’ sign by the street; on the menu are adobado and deshebrada.


Note: Some units move regularly; these lists are often out-dated within a few days of being published. It has proved to be impossible to keep them up to date.