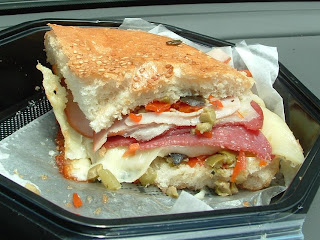 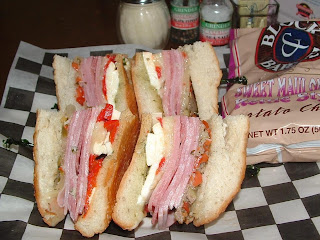 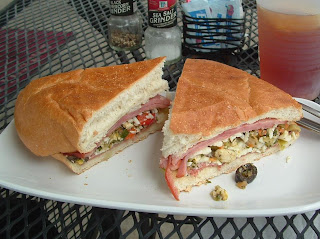 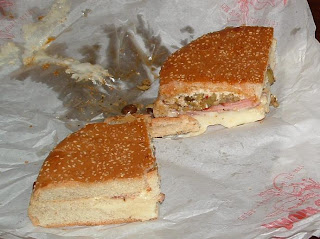 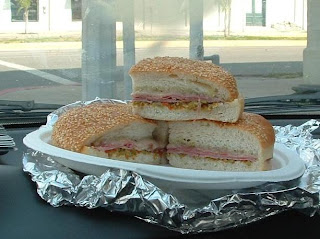 In the interest of full disclosure, I've never had one of these in New Orleans so I can't comment on 'authenticity' of the bread, balance of ingredients, etc., from that standpoint, only my experiences and taste buds here in Houston. However, I have just seen the re-run of the 'Sandwiches You Will Like' show on Channel 8 which had a segment on the original as served in New Orleans.

More or less in the order of preference, from the top: Spec's Liquor Warehouse Deli, downtown, loaded, everything seems in proper proportion to me, olive salad next to the bread on both halves of the loaf, as it should be. The quarter sandwich photographed better than the half sandwich.

Candelari's on Washington. Kind of a fu-fu presentation for this working stiff's sandwich but good. I liked Candelari's best a couple of years ago but I think they changed something (made it bigger so a half sandwich is all I can handle, for one thing).

District 7 Grill, Midtown location in the sleek diner on Pierce almost underneath the Pierce Elevated. No sesame seeds, but this may be the best bread; the online menu says there's turkey in there but I think that's a misprint. Mine had ham, salami, cheese; olive salad between the meats, preventing it from permeating the bread like it should. The olive salad was more like a giardinara than the others with cauliflower, celery, etc., and not enough olive-y taste for me.

Ragin' Cajun on Richmond. I was surprised at this one. I picked it up to go so maybe there was some shifting of cargo on the way home but I don't think so; still, there was almost nothing between the bread on one quarter of the sandwich.

Maceo's, Galveston. Also surprised at this one. Pre-made, they asked if I wanted it heated and I said yes so they zapped it in a microwave briefly. Part of the sandwich was almost too hot to put in my mouth, part of it was still room temp. I thought this one had the skimpiest ingredients.

Mandola's Deli on Leeland serves a Deluxe Paisano which they also refer to as a muffaletta; it appears to just be one of their regular po'boys (on a po'boy roll) with olive salad added.

If you ever get to NO, you should try a muffaletta at Napoleon House (if it's still there.) We went a few years back and a friend who grew up in NO told me this was the place to have my first experience with this monster sandwich. It was so good. Nothing I have had here in Houston has come close, but I keep trying them.

Thanks. The one on the PBS show made all the ones here in Houston look pretty wimpy. I can typically only finish half of one but I think I'm going to get whole ones from now on and save the other half for the next day - supposed to be better when the olive salad permeates the bread I think. That is if I can force myself to stop eating.