I’ve seen this place before many times when stopping at the bagel shop across the way but never realized what a treasure trove it is. The name General Store doesn’t convey food to me but this place is mostly about food. It’s a small but very well stocked ethnic grocery and deli with an incredible array of goods not only from Russia but also from Lithuania, Hungary and Romania among other countries. Many of the labels are only in Russian but there is good English signage. There’s a very sizeable deli section with an extensive selection of meats, especially sausages including many salamis to try. There are beers and wines and non-alcoholic beverages. I picked up an excellent bologna and some veal roll that was very good on my first visit plus some iced ginger cookies with a moist center that turned out to be cranberry and were very good for packaged, store-bought cookies. In the prepared foods department I’ve tried the pierogies and sauerkraut; they also have a small selection of produce at prices competitive with local supermarkets. 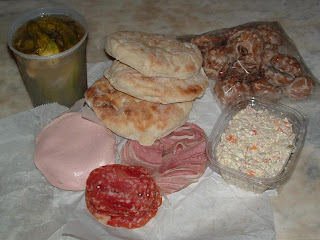 cucumbers in low-salt brine and sours. The sours turned out to be closer to half-sours and they were very good, about as good as the Batampte brand at about half the cost, but not as good or as interesting as the pickles at Golden Grain.. There are some different herbs and spices including a little celery and julienne of carrot and possibly flat leaf parsley. There have also been on one occasion some mild off-flavors, possibly resulting from the fact they didn’t trim the stem or blossom ends. I’ve experienced off-flavors in Batampte’s before, too, and made half-sours many times - its usually only a minor detraction. They have some other pickled items they make themselves including sauerkraut and pickled cherry tomatoes plus selections of branded pickles of several varieties on the shelves. The shelves are very crowded and the store cramped - expect to spend a lot of time looking around when you go.

Another customer recommended the Olivier salad and I was very grateful as I had never tried it before and wouldn’t have been inclined to as it looks like an ordinary potato salad with very small dice and not very interesting. This is the Russian version of potato salad with carrots, peas, onions, egg, mayonnaise and bologna - it’s very good. Since being introduced to it I’ve also had this at Golden Grains and Phoenicia, both of which I like just a little better than this version, but they're all three good.

Another package of the filled cookies had a translation on the back which reads ‘Scalded spice cakes of long term storage with sugar icing with fruit and berry filling - black currant.’ They were very good, better than the cranberry version, although a little stale - the ‘long term storage’ potential had been pushed to the limit. The list of ingredients also included apple sauce and coriander and they also come with a cherry filling. These were more like mini fruit-filled cupcakes than cookies. Unfortunately their product line varies and on my most recent visit, none of these were available.

Among their breads on my first visit I thought the soft, pillowy buns looked awfully good and very similar to the lepinja at Café Pita + on Westheimer. When I got them home and tried them I realized they probably are lepinja from the Bosnian place. On my most recent visit the packages now carry the Café Pita + label.

This place is a real plus. My favorites have been the bologna, pickles, and Olivier salad and the lepinja, so far. Nice to know I can get the latter so close to home without having to drive all the way out to the Bosnian food store next to Café Pita +.

The picture shows cucumbers in low-salt brine, lepinja, ginger cookies, bologna, Alpino salami, smoked tongue sausage, and Olivier Salad. Unfortunately they had a different brand of bologna this time around, also, and it’s not quite as good as the other brand I’ve bought there but I hadn’t had a bologna sandwich in decades until I discovered these meats and now I enjoy a honking big bologna sandwich every now and then. I have to try some of the mustards they have available, including an in-house made hot mustard.
Posted by Bruce at 9:52 PM

What's with the attitude? I don't speak Russian, sorry, and the store help treats me like dirt. I'm ready to buy a ton of stuff but can get no assistance. They have great salami, but I'll never buy it again because I'll never darken their doorstep again.

Try the Polish deli by The restaurant Polonia for friendly service and good meats etc. from Poland

I mentioned the store in my report on Polonia. I was over on Blalock recently and they've moved into a new facility a couple of blocks away -- looks like a bigger place from the outside. I wonder if Polonia is going to expand.