UPDATE: This restaurant has closed. A new restaurant in the same space named Sur serving South American cuisines was supposed to be opening but there are for lease signs in the windows.

This is probably the nicest restaurant along this stretch of Bellaire and it’s a very comfortable space. There are sofas and easy chairs around the edges of the dining room and a platform for live music. On my first visit I had the place almost entirely to myself for lunch but lately the place has been getting busier. 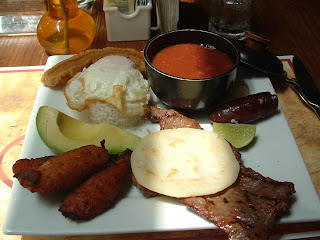 trendy, upscale name of pork belly and sirloin is substituted for the skirt steak that is usually on the plate. While the thin steak was good the chorizo was excellent but it was a very small portion. The red beans were in a separate pot and were really a soup. The plantanos maduros were also very good. I suppose what you like when it comes to chicharron depends on whether you like your bacon crispy or chewy and this was a little underdone to my taste, and mostly fat, not the best I have encountered.

I was advised by my waiter that the word paisa is related to the word paisano and means something like townsfolk or townsman -- if someone is from the same town as you, that person is your paisa.

They serve a very good 100% Colombian coffee, as you would expect. The portions of my lunch were a little smaller than this same platter served at other Colombian restaurants but the price was still reasonable. I made the mistake of sitting right next to the windows and had a problem with light and shadows when I took a picture on my first visit but have avoided that on subsequent visits. 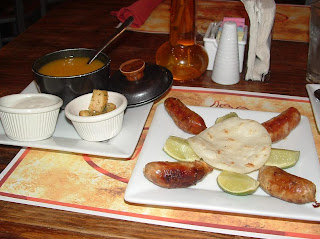 be available only as an appetizer so I tried that on another visit, along with the Bisque de Ahuyama or squash bisque, made with a butternut-like squash. This comes with croutons and crema and chicken or beef can be added for a couple of bucks extra. It was a very satisfying light meal although the chorizo was not as juicy and savory this time around as on my earlier visit. According to the hostess, they make their own chorizo.

From the dessert menu I’ve tried the Passion Fruit Ice Cream and it will be hard to pass that up on subsequent visits.

The restaurant bills itself as Latin or South American Fusion and there are some Venezuelan, Argentinian and Mexican items on the menu, mostly as appetizers. They highlight their Sancocho on the menu, website and table cards and I'm looking forward to going back to try it.

They have a daily lunch special for $4.99 but I haven’t tried it. I think the place functions more like a night club at night and It's easy to see it could get a little cacophonous with the huge speakers on the walls but the music was muted and the TVs, though on, have had the sound off on my visits. On one visit they were tuned to the Cartoon Network, a nice alternative to the news, politics, sports or (gack) soaps, game shows and Judge Roy Bean wannabes that populate daytime TV.