THIS RESTAURANT HAS CLOSED (THANKS TO ANONYMOUS FOR THE TIP). IT DOESN'T APPEAR TO BE A GOOD TIME FOR MALAYSIAN RESTAURANTS - MAK CHIN HAS ALSO CLOSED (TO REOPEN AS SOMETHING ELSE) AND THE PHONE AT KUALA LUMPUR ON BELLAIRE HAS BEEN DISCONNNECTED. I'VE BEEN WANTING TO TRY BANANA LEAF AND MAYBE I'D BETTER GO SOON TO GET A ROTI CANAI FIX BEFORE IT'S TOO LATE.

This was my first experience with Malaysian food (but not my only experience now) and I was not initially very impressed but the place has grown on me on subsequent visits and it has become one of my favorite new finds. 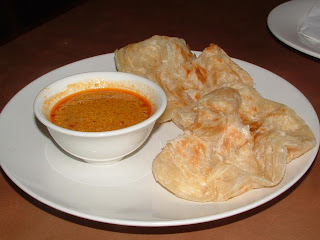 On my first visit the Beef Rendang was recommended as a very typical Malaysian dish. I wouldn’t say the dish was bad but the combination of beef and coconut (the meat is stewed in coconut milk) just didn’t appeal to me. Neither did the dry, Malaysian style of curry (the dish is simmered until the liquid is all absorbed - the meat is very tender and well-flavored by the seasonings, I just didn't like the coconut flavoring of the beef). However, the appetizer roti canai (ROH tee cha NIGH) with ginger dipping sauce was really good, described as an Indian pancake it is griddle cooked, light, a little fluffy and crispy. I compared it to a beignet minus the powdered sugar.

On a subsequent visit I was much more impressed with the Crispy Golden Fried Squids. 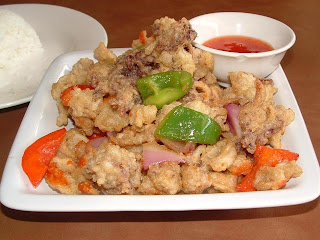 The waitress’ eyes lit up when I ordered it; she said it was very good, and it was. It was not quite as crispy as I would prefer fried foods, a little too salty, but with a very nice light batter and very tasty. It was described on the menu as hot and spicy but it was neither by my standards..

On another visit I had the Hot and Spicy Shrimp Rice and it did have a nice heat level. A small problem has been that both times I’ve ordered the roti canai the entree has been delivered before the appetizer and the shrimp was so aromatic and appealing, sitting there steaming in front of me, and I couldn’t wait.

The owners and staff have been very friendly. A gentleman, I presume the owner, 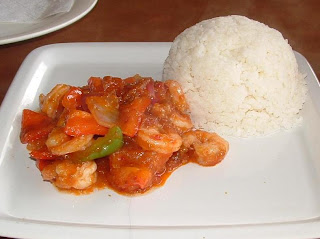 greeted me on my third visit and checked on me frequently during the meal. He observed me tearing the roti in pieces and dipping it in the sauce and commented that is the way it should be done (you are presented with Western style eating implements) and also said that Malays eat their sticky rice with their fingers. I was a little disbelieving at first but once I tried it discovered it works very well - you stick your fingers into the mound of rice and pinch a clump off and take it to your mouth. You get a finger bowl and napkins at the end of the meal.

You get a very large portion of the rice, surely in excess of 2 cups, and I was quite full and had only finished half of it when the owner started clearing my table. He observed I had some of the ginger dipping sauce from the roti left and said Malays would pour that over the rice so I did that and voila!, a tasty new twist on rice and gravy. I finished off most of the remaining rice and left overly full.

I’ve had the Teh Tarik, a hot Malaysian milk tea that looked like horchata and was good. I looked this up and mine didn’t have any froth on top so maybe they don’t have anyone on staff who’s developed the special skill?

The Malaysian coffee, hot or cold, is sweetened with condensed milk (the tea is too) and comes in a beer mug.

My understanding is that this place replaced a Mongolian Barbecue place at another location and kept that on the menu, then when they moved to this new location they also continued that. I’ve taken a look at the ‘buffet’ but haven’t yet tried it . About half the customers in the restaurant when I’ve visited have been taking the grill option. The lunch special price (11-3) is $7.99, at night it’s $10.99. Meats and veggies only are available during the day and seafood is added to the possible ingredients at night. The restaurant ticket read Bohot Mongolian Grill and Bakery, the former name of the place.

On my most recent visit a sign taped to the door advertised a new dish, roti jala with chicken, beef or lamb curry. Actually there was whole page of new dishes that have been added to the menu. Roti jala is referred to as Malaysia’s favorite bread. There was also Kangkung cuttlefish (kangkung is a water spinach) and a new belancan dish (a fermented Malaysian shrimp paste) and many more. The menu is full of interesting sounding dishes and I look forward to more visits. With the friendly helpful staff and intriguing menu selections this place is beginning to remind me of my early visits to Himalaya, Chef Kayser’s great Pakistani restaurant on Hillcrroft.

Re: the pictures: I dine out almost exclusively at lunch because of more modest prices and serving sizes - it makes it easier for me to keep from over-eating. The hot and spicy shrimp pictured is from the lunch menu (11a-3p) but the fried squid is from the regular menu.

Nyonya Grill Note the menu prices on line are outdated.
Posted by Bruce at 8:25 AM

They're closed for good already.