Vegetarian for a Week, Part 1

After reporting on the vegetarian restaurant Quan Yin recently I made the observation that I sometimes think about becoming a vegetarian, not for ethical, health or religious reasons but just because the food at Houston vegetarian restaurants is so good. But I never thought about doing it on a dare.

A couple of weeks later one of the moderators on eGullet announced he was going to try to go vegetarian for a week and challenged other eGulleteers to join him. The response was a little underwhelming at first but I was interested. His thread is really about cooking vegetarian rather than dining out so I'm posting about my dining out adventures here.

Of course I know people, including many of my relatives, who are of the firm belief that they will keel over and die, possibly within mere minutes, if they don't have meat at every meal, but I have long liked my veggies at least as much as meat. I was a vegetarian for about 6 or 8 months back in the 70s and most of my meals at home these days are meatless unless they include take-out or leftovers. Though I keep fish on hand in the freezer and there's probably some pork and chicken somewhere in there too, I bought beef to prepare at home only twice all of last year. I don't think I've gone as long as just 48 hours without meat in a long, long time but I didn't think this would be much of a stretch for me.

After a false start one morning when I absent-mindedly munched on some leftover cha lua from Banh Cuon Tay Ho as part of breakfast, I started in earnest with lunch at Cedars Bakery, 8619 Richmond. I'd been to this Middle Eastern bakery/cafe only once before and enjoyed a kafta manakish and remembered they had a veggie pizza on the menu, specifically the Harhoura Veggie Pizza. 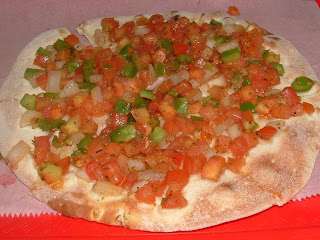 Just what the difference between a manakish and pizza is here I'm not sure; they both appear to be cooked in the same brick-lined, gas-fired oven on the same thin pita bread crust. At least I never saw a saj, the domed cooking surface that a manakish is typically cooked on. But while the manakish was cut in quarters and was thin and flexible enough to be foldable like a New York style pizza, this was cut in thin wedges and wouldn't hold up when picked up. With no cheese on the pizza, the toppings just toppled off. It was just chopped tomato, onion and bell pepper but did have a very nice heat level, which is kind of unusual for Middle Eastern food in my experience. A couple of their other pizzas may be meatless, too. I should have asked first.

I did pick up a package of their beautiful, aromatic, tissue paper thin markouk, the thinnest flat bread I've ever encountered, and it was very useful in the ensuing week in meals I prepared at home.

My friend Ziggy Smogdust has been telling me about Pine Forest Garden, 9108 Bellaire, for at least a couple of years. The chef adheres to strict Buddhist vegetarian cuisine principles and it's one of Ziggy's favorite restaurants. I'd been just once and asked Ziggy to meet me there and help me pick the good stuff for lunch on Day Two. 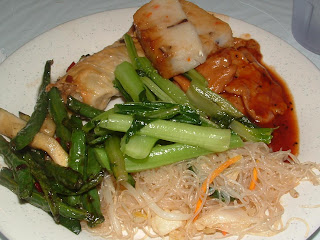 The best thing on the first plate was the fried tofu skin wrap at 11 o'clock, wonderfully juicy with a crisp and crunchy, fresh tasting filling that I never took the time to examine, thinking I was going to make a second pass at the buffet and get another one. I'm pretty sure it had some sort of sprouts in it and possibly some nuts. I also enjoyed the turnip cake and the long beans and zucchini; the long beans still had a good bite to them. The greens in the middle of the plate were something of a mystery (the buffet is not labeled); Ziggy had always thought they were Chinese broccoli but Samuel, the chef, recognized Ziggy and came over to chat. He told us what they were - the Chinese name - and I cannot recall it. My guess would be Chinese mustard greens. The mock meat at 1 o'clock was even more of a mystery; neither one of use could figure out what it was supposed to be. It had a texture more like pieces of chicken skin than muscle meat which wouldn't have been bad had I not be expecting a fibrous texture like meat. 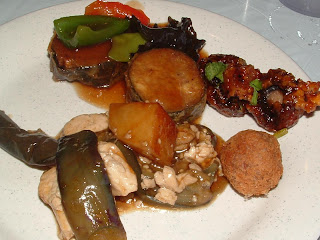 New things are constantly being brought out for the buffet and on my second pass through either there was no more fried tofu skin or I missed it because there were so many other things I wanted to try. By the way, vegetarian food is very filling and I was getting very full already. The big hits of my second plate were the deep fried mushrooms, the tree fungus, aka wood ear mushroom, at 1 o'clock, and the 'salmon croquette.' The deep fried mushrooms were just a little sweet and a little crispy; I could have eaten a whole plate of them. I've had the tree fungus only minced in banh cuon before and never encountered it like this; I loved it. I'm not really sure what the little fried ball was supposed to be but the texture reminded me very much of a salmon croquette. The disks at the top are mock fish. I've had these before in plates from San San Tofu and liked them just fine but here, braised, the texture became too soft and mushy.

Ziggy also had a second plate, with a big piece of the fungus and some sweets which he wanted me to try including lightly deep fried sweet potato and a Buddhist 'jello' - actually a cross between jello and custard in texture - and mango flavored. I'd noticed them on the buffet and just assumed they were pieces of mango and had passed them over. They were, however, virtually impossible to pick up with chopsticks.

Pine Forest Garden is going to be one of my favorite restaurants, too. I'm looking forward to going back sometime to try their dim sum service, from 3 to 5 as I recall.

I had made a list of all the vegetarian restaurants I've been to in Houston and had scheduled a visit to Georgia's Farm to Market on I-10 for Day Three, but I was still full from the feast at Pine Forest Garden and didn't want to deal with the temptation to over-eat at their large salad bar so I opted instead for something much closer to home, Saba's Kosher Cafe, 9704 Fondren @ South Braeswood, previously reported on on this blog.

Saba's has remodeled, possibly to counter the new competition in the neighborhood, and is a nicer room for dining-in now. The menu has been in flux and my favorite item, which I had decided on in advance, the Moroccan Cigars, is not currently on the menu, although they said it will be coming back. I opted instead for the Sabitch Baguette. 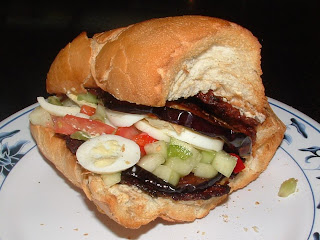 I'd had the Sabitch plate before, grilled eggplant, hard-boiled egg, Israeli salad (diced cucumber, tomato and bell pepper) and hummus, which comes with a pita on the side. You can get this as a pita sandwich, too, but this was excellent. There was some hot sauce, I think the Yemeni skhug is what they use, similar to harissa. The server might have noticed some consternation on my face, though, as initially I thought this was going to be a very dry sandwich, so he offered some tahini sauce too. Turned out it didn't need it, though I added it for flavoring, but there was probably at least a quarter cup of hummus on the sandwich and by the time I got through, the oil in the hummus together with the moisture from the salad was turning the lower part of the sandwich rather soggy.

See the second part of this series here.
Posted by Bruce at 9:00 PM