Vegetarian for a Week, Part 2

See the first part of this report here.

By Day 4 I was thinking wistfully of the Gujarati Thali at Sweet n Namkin but since that's no longer possible, I pulled a wild card out of the deck and went to Pupusa Buffet, previously mentioned here.

Salvadoran is not a cuisine that springs readily to mind when thinking of vegetarian options but I remembered the one time I went, to the original location on Bellaire just after it opened, I had liked the pupusa con queso y ayote best and I couldn't think of any other pupuseria that even offers one. 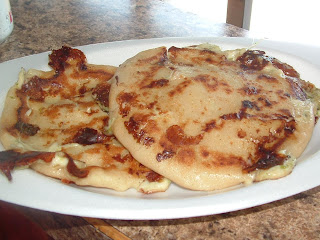 I arrived at the Hillcroft location just as lunch service was beginning. My pupusas were just being brought out of the kitchen as I ordered them - two squash and one loroco. Too hot to handle at first, and too soggy, I couldn't wait and dug into the first one using a fork. By the time I'd finished that one, the others were cool enough and dried out enough to pick up and eat. I discovered that the sogginess I had noted on my first visit is not just due to their being on a steam table - they come out of the kitchen that way. 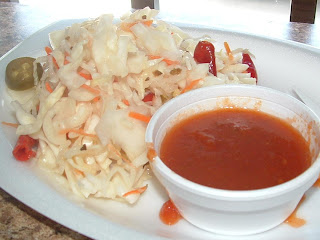 I also got a big portion of the very vinegary curtido, surprisingly spicy for Salvadoran food with two kinds of chile peppers, both in escabeche, and the salsa picante. 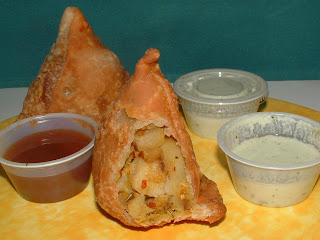 Being vegetarian in Houston has got to include some vegetarian Indian and Pakistani fare and I had planned on going to Shiv Sagar for dabeli on Day 5 but got a late start on the day and didn't want to deal with the crowds in Little India on the weekends, so I headed over to Savoy Tika Kabob Restaurant and Grocery on Wilcrest for a couple of their great samosas - chunks of potato, peas, crushed spices, two kinds of chillis, I think - this is still my favorite of the samosas I've found, slightly larger and much spicier. I was going to get an assortment of pakoras, too, but they didn't have any on the menu. The samosas proved to be enough by themselves. The garlic chutney was very garlicky; I hardly bothered with the date/tamarind chutney. 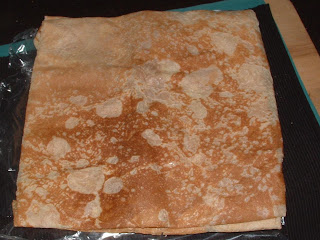 On Day Six I had a jury summons for the afternoon sessions at the county courthouse. With not enough time to go to a restaurant for lunch I made a wrap at home with some of the markouk from Cedars Bakery using some vegetarian shrimp I had picked up recently at San San Tofu (made from milk whey protein), lettuce, daikon, cucumber, and, for lack of anything better, salsa. It was quite good. In fact, I made another one for dinner. I forgot to take pictures both times as I usually don't take pictures of my home meals, so that's just a picture of the markouk, right out of the bag, all folded up. The sheets unfold to 21" in diameter.