Vegetarian for a Week, Part 3

See the first part of this report here and the second part here. 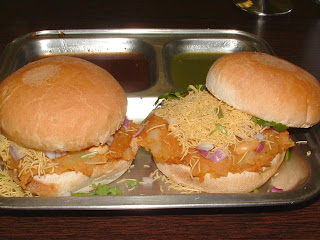 On day seven I finally made it to Shiv Sagar for the Dabeli. I’d had this just once before here and thought it was the best I’d had with a wonderfully fluffy, toasted bun but he bun was different this time, seemingly nothing but a store bought hamburger bun, so this was a little bit of a let down. It was still good, though. If you like peanuts, there's a ton of 'em underneath all that sev making for a crunchy good sandwich with plenty of the chutneys to doctor it up.

Walking out I noticed Neeta’s in the same center. I’m sure I’ve noticed it before but it’s never registered and there’s not much about it on line. I guess in a shopping center with Himalaya, Shiv Sagar, London Sizzler, India Grocers and Chandrika Massala, something has to be overlooked?, but I saw the sign in the window about the lunch special Gujarati thali and decided to continue my little experiment for one more day. 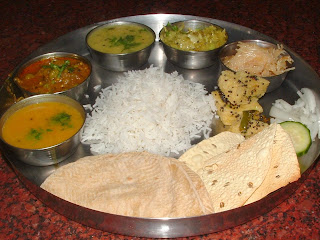 This was definitely one of the best meals of the week, putting me in mind of the Gujarati thali at Sweet n Namkin I had been reminiscing about. The tray was not loaded down with as many elements as the thalis at Shiv Sagar and Shri Balaji and made for a perfect light lunch. The katoris are, I think, the smallest they make, about 1/2 cup or so. They also have a ‘combination plate’ lunch special which I think includes a sampling of their meat dishes; those plates were coming out a lot faster than my vegetarian thali but I was very pleased with what I got. The Navratam Korma, which I think is what the katori at 9 o’clock contained, was slightly sweet, something I’ve never encountered before, as were the shredded potatoes at 2, but I saved the light, cake-like steamed dhokla speckled with black mustard seeds for my ‘dessert.’ It looked like cake anyway, even though it wasn’t the slightest bit sweet and who says dessert has to be sweet?

So what have I learned from this experiment? Not much really. There were a couple of misses during the week, a couple of pleasant surprises, but it proved to be not much of a stretch for me, as I expected. I got meat cravings only once, on day 6. On the way to the courthouse, I passed the exit on the freeway I would normally take to go over to Frenchy’s on Scott and I couldn’t help but think some fried chicken would sure taste good for supper. The thought passed quickly but just to be sure I took another route home.

I could have gone on, I think, but decided 8 days was enough; I have no intention of actually becoming a vegetarian - I will continue to enjoy both vegetarian and carnivorous meals as the urge strikes me. I did wind up going back to Pine Forest Garden on what would have been day 10.

One self-realization was how much I missed exploring and trying new things. I played it very safe for a whole week; other than Cedars, which I’d been to only once before, Neeta’s was the only place I went where I didn’t know in advance what I was going to have or had a good friend to guide me. I missed the anticipation of something or someplace completely new and unknown, even though part of the time they wind up disappointing.

I made the same mistake in the meals I made at home during the week. I laid in an enormous amount of produce for gazpacho, vegetarian greens, squash soup and more, plus apples, oranges, bananas, plums, nectarines, peaches, kiwis and grapes for snacks. But I relied totally on tried-and-true, standby recipes I’ve been making for years instead of trying something new.

If I were to do it all again, I’d include exploration of new recipes as well as new restaurants.
Posted by Bruce at 4:36 PM