Some Places I've Been Eating Lately

When I'm not hung up by a major obsession (most recently Sichuan cuisine and soup dumplings) I like to keep trying new things. These are some of the places or dishes I've tried recently and really liked. 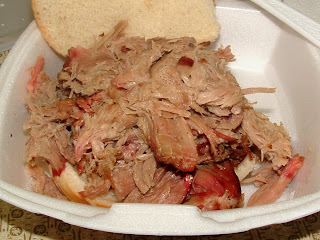 Not all that many places around here serve pulled pork and even fewer do it well. Jamie Fain is from Tennessee, where pork barbecue rules, and turns out some very good pulled pork. Lightly smoked over hickory, my sandwich was juicy and flavorful, about as good as any I've had in Houston. There are two Tennessee style sauces (not sure what that means) - a mild one and a surprisingly spicy one. I thought the spicy one overwhelmed the meat and preferred the mild one. 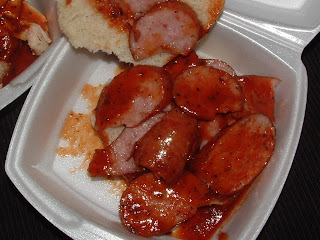 The link sandwich was good too, a mildly seasoned pork sausage with a nice snap from a natural casing and likewise very juicy. The pulled chicken turned out to be chunked and I thought the spicier sauce helped that one out, while the sliced brisket was a disappointment. If you're looking for the intensely smoky sort of brisket you'd get from a Central Texas style joint you're not going to find it here and I gotta have that when I have brisket.

Sides include a creamy slaw (you can get that added to a sandwich to create a Memphis style pulled pork sandwich for a little extra), baked beans and potato salad, plus smoked, stuffed spuds. There are also ribs and half chickens, which I haven't tried. Sandwiches come in regular (4" buns, pictured), large and jumbo.

I'm a native Texan but I think the pulled pork sandwich, done well, trumps a chopped barbecue beef sandwich any day and I'm glad to have this place on this side of town.

They're open Tuesday thru Saturday for lunch and early dinner and have been very busy on Saturday when I went in. 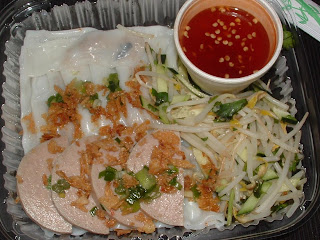 I've recently gotten interested in banh cuon (Vietnamese rice crepes) and remembered I'd read Don served a good one; I stopped in intending to get a banh mi to go but spied this on the menu and requested it instead. I'm sure this would have looked better plated up in the restaurant, but it was very good. This was with the more common pork filling instead of the shrimp I had recently at Banh Cuon Hoa II on Beechnut and I liked it better. I'll be trying this again in-house as well as several other places in Chinatown that specialize in banh cuon. 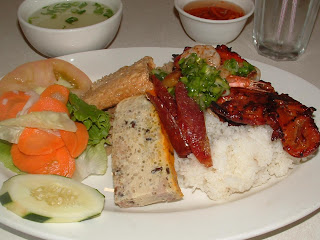 Another dish I've been interested in trying lately is com tam - Vietnamese broken rice dishes. I was headed to the eponymously named place in Hong Kong City Mall when I spotted this one, which hadn't been on my list, and decided on a lark to save myself the hassle of the hordes at HK Mall on a weekend and try it. It's a large and noisy room; the young host virtually ran to the front door to welcome me and I was seated less than 2 minutes when a server appeared to ask if I was ready to order. It's a large menu and normally I would have wanted more time but I knew what I wanted and went straight to the Com Tam section of the menu and went with the first choice - Com Tam Thuan Kieu Dac Biet Mon A - bi (shredded pork) - barely visible under the fried tofu skin, baked egg, lap zuong (sausage), charbroiled shrimp (tom nuong), tofu skin with shrimp (tom hu ky), and pork chop (suon), plus garlic chives, pickled and fresh vegetables. A completely lame imitation of a tomato came on the plate and my pork chop was overcooked and dry but otherwise I liked this dish, especially the baked egg and pickled veggies. As is the case about half the time when trying a new dish, I really didn't get the appeal of the broken rice but as is also the case a lot of the time when I try it several times, I grow to like it so I will be having it again. There are several places in Chinatown which specialize in these dishes with com tam in the name of the restaurant; there are an amazing 50 varieties of com tam on the menu here.

I had seen this place several times before but never remembered to put it down on a list of prospects; it's been around a long time. I spotted it again pulling away from Thuan Kieu and finally remembered to make a note to go back.

The interior is in more appealing shape than that rather shabby shopping center; service was quiet and very courteous. There are signs in the windows proclaiming it's a vegan restaurant but not all dishes on the menu are identified as vegan. There is a menu book but also a big picture menu which I found most helpful/tantalizing in picking a dish. The picture menu is available on the website, too, and I had an idea what I wanted before I went in. 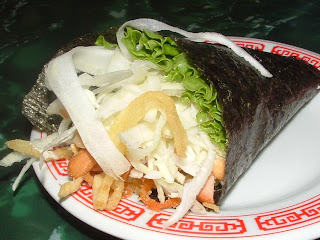 The Hand Roll was delightful - peanuts, lettuce, shredded cabbage, mock cha lua and vegetarian cheese plus a veggie mayo, wrapped in seaweed. Move over spring rolls - I just may like this better. 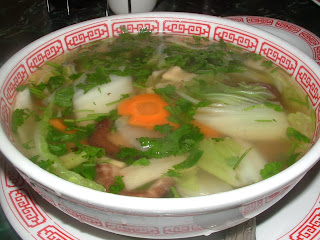 I seldom order soup at a restaurant; soup is one thing I do pretty well at home and seldom feel like paying someone else to serve me something I can fix at home but the Quan Yin Special Soup (Sup Dac Biet) was calling out to me. Mushrooms, Chinese cabbage, carrots, bamboo shoots, cilantro, and mock chicken breast in a veggie broth, about 6 cups worth overall. Add a little acidity, a little heat or a little umami to your individual servings with the condiments on the table and have a feast. This was just what the doc ordered.

I left very contented, feeling extraordinarily virtuous for eating such healthy fare, thoroughly hydrated and looking forward to going back. Sometimes I think about becoming a vegetarian in Houston, not for ethical, religious or health reasons but just because the vegetarian food in this town is so damn good.