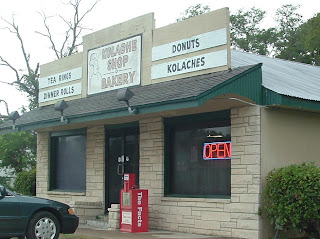 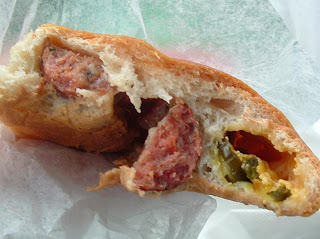 Behold the celebrated and award-winning Jalapeno Pig. It was named Grand Champion of the state of Texas in 2007 in a statewide kolache competition. This place does call their offerings pigs-in-a-blanket rather than sausage kolaches or klobasneks. It’s about twice the size of any I’ve had before, weighing in at about 6 or 6 and a half ounces, with a good chunk of sausage with natural casing, not just a lil’ smokey or breakfast link much less a wiener, with a modest amount of cheese but a generous amount of jalapeno. An extra attraction is the bread, said to be from a family recipe. It’s more of a country style white bread with a coarser grain than most kolaches with a nice crust and crumb. The bread is also available as rolls. The pigs come with or without cheese and jalapeno, of course, and also as ham and cheese. Another option is the Fajita Pig - fajita meat and Monterey Jack in the same bread. Apparently it’s their fastest seller but I didn’t like it nearly as much. I'm a sausage-aholic though, and not much of a fajita fancier.

Their kolaches, in only about a half-dozen varieties, are quite substantial, too, but not as good as some of the best I’ve had from the Original Kolache Shop on Telephone Road or Kountry Bakery in Hallettsville and Schulenberg or Weikel’s outside La Grange.

They’re open only limited hours, 5 to 11 am, Monday thru Friday. The shop is neat on the inside, with booths and a few tables and a very friendly staff as you would expect in a small Texas town. These may not be worth a special trip from Houston to try but if you’re in the area it’s a real good bet for a breakfast nosh.
Posted by Bruce at 8:43 PM

guess vegetarian week is over