8619 Richmond, previously reported on in my Vegetarian for a Week, Part 1

Ever since I first read Ellie Nassar's post in 2007 about Labib's in Beirut my mouth has been watering for mana'ish, so when I first came across Cedars a month or so ago and saw they called some of their offerings manakeesh (there are many spellings) instead of just Lebanese pizza, I had to rush over to try it. 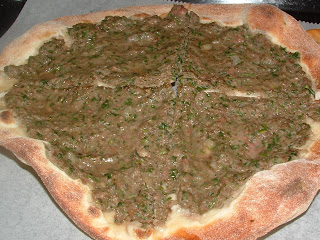 I had the kafta manakeesh, apparently the same meat that would be formed onto skewers and served as kafta kabobs. There are only a couple of manakeesh on the menu with other offerings labeled pizza and bread and whether they cook them on a saj or not I don't know, but I was wowed by this. Talk about aromatic - I was almost knocked back from the table by the aroma of the sizzling, flavorful and juicy topping. The crust, just their thin pita I think, is thin enough to be flexible a la a New York pizza. They also serve a couple of wraps, including a sojok and manakik, both being sausages, and schawarma on the weekends.

Cedars Bakery
Posted by Bruce at 11:56 AM