Not all Kachoris are created equal

I have been eating a lot at Shri Balaji Bhavan on Hillcroft lately after hearing about it for some time, trying out some of the lesser heralded offerings as well as the very popular ones. I've been interested in Indian snack foods like pakoras and vadas and read about kachoris but hadn't yet had one. When I found one on the menu, the Pyarelal Kachori, I had to try it. I thought I understood kachoris to be small, fried, filled dough snacks, a sort of Indian snack-sized empanada, so I was quite surprised by what I got. 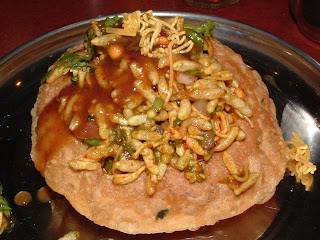 I haven't been able to find out anything about this, such as whence the name. It is sometimes referred to online in the possessive, Pyarelal's Kachori. This was a flaky puri like shell, about 4.5 inches in diameter, stuffed with channa (chickpeas) and potato, with a peanut or two and moong gram I think, garnished with chopped tomato and onion, drizzled with a date/tamarind chutney and further garnished with puffed rice and coriander leaf. Far from being a snack, it was quite filling, practically a meal in itself. I tried picking it up to eat out of hand, thinking that was the way you were supposed to eat kachoris, but didn't get very far with that. I had to try.

Wishing to avoid the long lines (and wait for the kitchen) on weekends at Shri Balaji, I trundled down the street to Krishna Chaat House, next door to and operated by Udipi Cafe. I've never been in here before, thinking that 'chaat' indicated they just offered those snack mixes with sev, nuts, papri, etc., which I prefer not to keep around the house, so I was surprised to find a small diner-like place with booths along the wall. There is a big menu board on one wall and the complete Udipi Cafe menu is available on the counter at the front so apparently it is possible to order anything from the sister restaurant here. Here I discovered another kachori, the Khasta Kachori. Now I was pretty certain from what I had read online that this would be the snack-sized, pop-em-in-your mouth type. 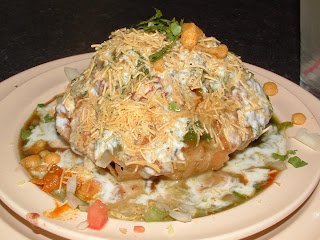 But nooooo. This one was even more of a festival for the mouth as well as the eyes with a layer of potato topped by a mound of channa in a curry paste, garnished with onion and tomato, two chutneys and yogurt, coriander leaf and sev, sort of a dahi puri writ very large. I gobbled it up forthwith, grinning all the way.

I have now learned from a couple of very knowledgeable sources that there are indeed two types of kachori. Originally, it was a small snack involving a bread-like dough, filled with various fillings and fried, said to be a substantial bite and capable of being held for weeks without refrigeration (I haven't tried this). More recently a new type of kachori appeared, first in Delhi but spreading from there, very popular except perhaps among purists. This involves the leavened, flaky, puri like shell, cooked in hot oil so it puffs up, then stuffed (or overstuffed) with fillings, dressed and garnished. These are known generically as Raj Kachoris or Khasta Kachoris, khasta indicating the use of a shortened dough or just meaning flaky.

And I still haven't found any examples of the original type of kachori. There do appear to be some listed on the menu for Bhojan with fillings associated with the original style instead of the raj kachori so I will have to try them out.

And in the meantime, I still have this thing about Vadas.

Edit: for more on vadas and kachoris, see Quick Bites VI
Posted by Bruce at 10:21 AM

My first thought was a Dahi Puri on steroids! Looks great.

The flaky shell is a nice variation. I also saw one on the menu at Shiv Sagar but didn't try it.