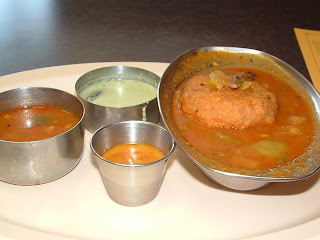 I tried Krishna Chaat House in my quest for vadas and was happy to find several on the menu. I went for one that sounded interesting, Sambar Vada, and was rather surprised by what I got. This was my beloved Mehdu Vada ('lentil donut') served in sambar, with a cup of rasam and two chutneys on the side. Actually, I've learned there are numerous variations of the donut shaped vadas, not all containing lentil, but I believe this one did. The sambar was thick with vegetables cooked to a very soft state - a big chunk of potato, some sort of squash, onion, etc. The vada, plumped up somewhat by the liquid, was like a dumpling and I couldn't help thinking I was eating something like a vegetarian version of chicken and dumplings. This is a snack? More like a light meal for me and it was real comfort food. Well, soporific, actually, I went right home and had a great nap. There is also a rasam vada on the menu.

Across the top of the vada was an ingredient that baffled me. Tough as a matchstick it seemed to have no purpose other than decoration and wound up on the edge of my plate. I encountered the same thing in a cup of rasam at Shiv Sagar across the street, a couple of doors down from Himalaya, the next day. I have since learned this was Moringa. No, that's not a dance number by Xavier Cugat, it's a vegetable also popularly known as drumstick, sort of an okra lookalike. The tough exterior encloses a softer interior that is consumed like you would eat an artichoke leaf, by scraping it with your teeth. The taste is said to resemble artichoke, too, although I couldn't vouch for that since both times it wound up on the edge of the plate. Next time, I'll know better.

On a second visit I went for the Khasta Kachori, already reported on here. I also tried one of the two beverages on the menu that I've never had before, Masala Lemon Sharbahat. This comes in the masala, salt and sweet varieties and is apparently Krishna's spelling of what Wiki shows as Sharbat, a fruit drink made from the leaves and flowers of a fruit tree instead of the fruit itself. You can see a tiny portion of the glass in the picture on the other post. 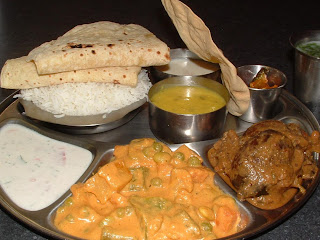 I had picked up a copy of a take-out menu to study and went back again to try one of their combo plates. These are no longer listed on the menu board or the menu card at the counter but I inquired about them and they sent one out, the # 1. This is offered as a Dal, 2 Sabjis, Raita, Rice, 2 Rotis, Papad, and Chaas or Tea, for $6.95. I also got a sweet (at the top of the platter) and pickle (at 2 o'clock).

The Mixed Vegetable Curry at the bottom of the platter included peas, green beans, carrot and baby limas, among other items, and was very rich. Like most dishes here and at Udipi, it was mildly seasoned. The Eggplant Masala included two whole eggplant that were very minimally cooked, requiring a knife and fork to eat. They had a texture more like a raw apple or under-ripe pear, quite unusual for eggplant. This was the spiciest dish I've encountered here.

The sweet was Payasam, the South Indian term for what in the North and Pakistan is called Kheer. This is usually translated as rice pudding but is typically not much like what is called rice pudding in the US and can be made with something other than rice. In this case, it was made with vermicelli (seviyan) and was drinkable. I'm really getting to like this Indian practice of including a sweet as part of the meal, to be consumed along with the meal if you like, instead of waiting until after the meal.

But I don't get Indian pickles; they are very, very sour. I sampled the ingredients but still don't comprehend how these are supposed to complement the rest of the meal and mostly it went uneaten. 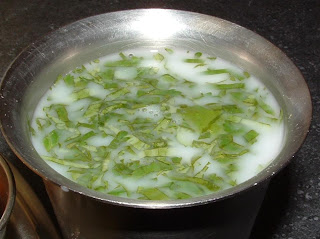 The other beverage I wanted to sample was Chaas. This is usually described as Indian buttermilk. I've been privileged to have a couple of correspondents helping me to learn about Indian foods; one of them, Jenni, from the UK, points out it is not much like the cultured buttermilk we're familiar with in the US. This was readily apparent visually and on first sip. It was about the consistency of low fat milk. It is supposed to be the liquid left over when yogurt is turned into butter. Jenni informs me butter is made from yogurt in Indian, not sweet cream, and also says that many places cut corners in making chaas and just thin out yogurt with water, as lassi is made. After also sampling this also at Bhojan, I am inclined to think Krishna does a more authentic version.

I have been enjoying yogurt drinks for many years and like buttermilk, too, and this is a real keeper. I've had yogurt drinks with mint or other herbs but never coriander leaf before so I've learned a new trick, though I'll have to make do with thinned down yogurt at home for the base. As you can see, you not only get some of your daily requirement of dairy fulfilled with this drink but also some of your daily requirement of veggies - it was thick with chopped coriander leaf.

The metal tumblers are a real plus, too, noted for keeping beverages cool and making them taste cool, they sure beat drinking out of a styrofoam or wax-coated paper cup.

I believe Krishna is closed on Tuesdays. A copy of the Udipi Cafe menu is on the counter so perhaps it's possible to order anything off the Udipi menu here? At 5:00 pm, as Udipi is switching over to menu service, Krishna offers a small vegetarian evening buffet.
Posted by Bruce at 1:02 AM