Currently located at Bissonnet and Hillcroft 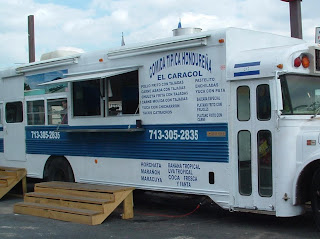 For some reason, Honduran operators prefer buses over trucks but this is a smaller one than the other units I've seen, although it does have a bigger menu.

The man on board was very friendly and spoke good English. He wanted to make sure I understood this was not Mexican food. I went for the pastelitos, Honduran empanadas, and a Balleada Sensilla or simple balleada. Sopa de Caracol, conch soup, is supposed to be Honduras's national dish but the Balleada surely must be the national snack food. I fell in love with them on first bite - a simple, always fresh-made, four tortilla, folded over a simple filling of refritos rojos, crema and queso. I've never bothered with the more elaborate creations because this is so satisfying.

A glob of fresh masa dough was pressed out right in front of me on the same sort of tortilla press I have at home, then teased out to about 10" in diameter. Just as I thought he was going to start tossing it in the air like pizza dough, he lightly greased a hot griddle and slapped it down. It began to puff up almost immediately. It was turned over after a couple of minutes and quickly browned on the other side, picking up a little charring. Then a half cup of refritos rojos was smeared on one half, crema was drizzled over it all and, unfortunately, powdered cheese was sprinkled on. Honduras is not noted for it's cheeses; it's probably a good thing they typically use Mexican cotija or even powdered parmesan. The balleada was folded over, wrapped in tin foil and set aside while the pastelitos were deep fried.

They came out of little paper pockets, i.e., were not freshly made on-board, but whether they were store bought or not, I don't know. These were deep fried (4 of them), then placed in the plate, freshly grated cabbage, grated on a mandoline right in front of me and a generous amount of close to 2 cups, was layered on top, some warm tomato sauce was ladled over, a little crema was drizzled, I think, then the ubiquitous Honduran condiment which another Honduran restauranteur has confirmed is nothing but mayo and ketchup was also drizzled on, fortunately with restraint, and the ubiquitous beet-red pickled onions are added and I was good to go.

Some Honduran places slather on the mayo/ketchup sauce with abandon, the way mediocre barbecue joints pour on the sauce to make up for mediocre meat, so I'm always glad to find a place that applies it with restraint - a little goes a long way.

As with anything involving beans, the quality of the beans matters a lot; I've had some outstanding frijoles rojos at Salvadoran places, where they use a special variety, I think, called silk beans. This balleada was not the best I've had, nor the worst; it certainly was large, but the beans were a little bland. These things can vary also when American style sour cream is substituted for crema, overwhelming the rest of the ingredients, and cotija is used instead of powdered cheese.

Generally, Honduran food, which very closely resembles Tex-Mex in some ways, is very bland, one of my biggest complaints. The best pastelitos I've encountered had a nicely spicy mix of ground beef and rice, but these, with a filling of rice, ground beef and potato, were quite bland.

The bus disappeared right after I had visited it the first time but I happened across it a couple of weeks later at a new location on Bissonnet at Hillcroft. There was a woman on board who spoke no English. I tried the Honduran tacos, another of my favorite Honduran foods, similar to a Mexican flauta with a rolled flour tortilla filled with either shredded chicken or ground beef. These are great when the tortilla is not too thick, I think, and there's a better balance of meat to tortilla. The tortillas in these, which were pre-made but made on the bus, were as thick as huaraches. I didn't care for them much at all. The woman also was of the slather-on-the-ketchup and mayo- persuasion and I couldn't think of the word for Enough! in Spanish quick enough.

One thing I did notice right away about this bus's menu is the Pollo Frito con Tajadas, i.e., banana chips. I've tried this at every Honduran restaurant I've visited and always been pleased with the sides but very disappointed in the chicken itself; it has always come out very tough, almost unchewable in one instance, so I don't know if I'll ever try it here.
Posted by Bruce at 10:52 PM