LA VINA HAS MOVED BUT IT'S STILL IN THE SAME SHOPPING CENTER, JUST ACROSS THE PARKING LOT FROM ITS PREVIOUS LOCATION.  IT LOOKS LIKE A LARGER SPACE.

I've stuck my fork in some pretty awesome pork this summer. In fact pork dishes have been among the most impressive meals I've had all year - the Pernil at El Mofongo Boricua, the Masitas at this place and now the Pernil Asado.

I have to give credit where it's due. Although I'd been to this place for the Cubano sandwich, it was a review on 29-95 that prompted me to return.

Apparently, the restaurant has changed names and is now La Vina again - it's on the window, the menu, the receipts and the to-go menu. The names of the dishes have also changed. Earlier this summer I had the Masitas Fritas which is like the Cuban version of carnitas and it was far better than the overwhelming majority of carnitas I've had in Houston. 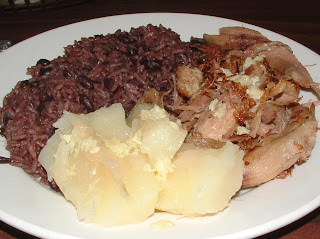 Recently I returned to try the Pernil Asado with Moros and Yuca Mojo. I didn't like this as much as the Masitas; it wasn' as juicy as the Masitas and there was some bitterness from too much charring of the meat but it was still quite good and the mnced garlic garnish was a treat. The black beans are excellent here but I did not like the mixed beans and rice as much as having the two served to savor separately. The yuca was something of a revelation: I'm not sure I've ever had them simply boiled (with garlic) like this and I definitely like this preparation better than fried.

I've also enjoyed the Batidas de Trigo and Mamey here and IronBeer. I had the Cubano sandwich once and remember thinking it was just about as good as any I've ever had and then thinking 'So What?' Sorry, but I just haven't been able to get excited about this sandwich and I've had it at about 7 or 8 places around Houston over the years.

I didn't get a picture of the Masitas for some reason but there's a good one in the 29-95 review by John Hook.
Posted by Bruce at 6:28 PM