Ziggy Smogdust has been telling me for some time of the great tacos at El Mapache and when he recently sent me this picture..... 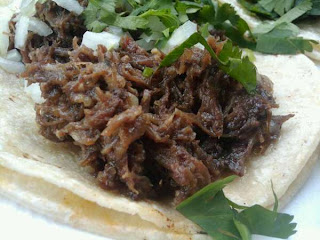 Ziggy goes to the El Mapache III at Gulfton and Renwick but in my rovings around southwest Houston I've spotted another one at Richmond and Dunvale, so I headed over to that one - El Mapache El No. 1. Good barbacoa; worth the stop. Thanks, Ziggy. 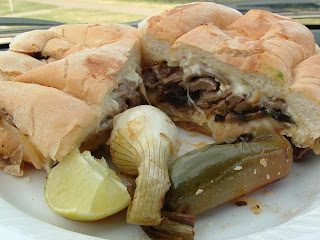 UPDATE: The unit on Richmond has been replaced with one named El Tepache # III that I haven't tried. I've been to the one on Gulfton several times for the tacos, though, and their special torta, Torta a la Mapache - thin steak, grilled onions, mushrooms, melted cheese (jack?) and mayo. Just $5.

UPDATE: The El Mapache on Gulfton @ Renwick has moved a half block west; there is a unit labeled # 4 parked at Renwick @ Dashwood, just a block off of Bellaire..
Posted by Bruce at 3:34 PM

HOW U DOING!
CONGRATULATIONS ABOUT YOUR BLOG I WAS SO EXCITED WHILE I READING ABOUT OUR TRAILERS I LOVE YOUR BLOG!
GREETINS..