This post has been edited to add some explanation of 'rose meat' and another picture. 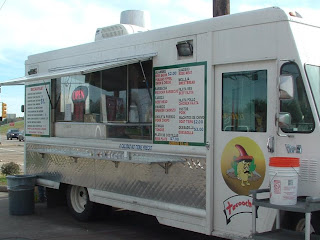 Boy did I think I had a real find when I first got a good look at this one. I've seen it many times, even tried to stop once but the driveway of the filling station was so crowded there was no place to park. It's a very well maintained unit that I've observed doing a lot of business on numerous occasions. 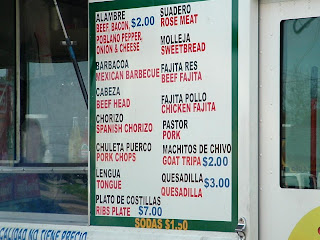 As I've mentioned I like to look for the less common offerings and the menu here was very promising. On the breakfast menu are tacos de machacado, lengua en chipotle and tacos revolcados. The regular menu includes mollejas (sweetbreads) and machitos de chivo (goat tripe); mollejas are somewhat rare and I've never seen machitos anywhere so I was very encouraged. 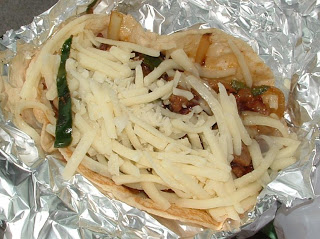 On my first visit, however, I wasn't feeling very adventurous and I went for the alambre - beef (sirloin I think), bacon, grilled onions and poblanos and cheese. This was a larger taco on a beautiful, thick, hand-made tortilla and it was excellent with a very generous amount of filling. Although I only sampled it after finishing the taco the salsa verde was very good, too.


I made another stop a couple of days later and was disappointed to learn that both the mollejas and machitos are no longer served so I tried the suadero and chorizo. These were the smaller Mexico City style tacos for only $1 apiece. I haven't had suadero more than a couple of times but this was the best I've had, tender and juicy pieces of both the fatty and lean portions of brisket I think. The chorizo was very mild but excellent. Both salsas were very good with the green one much hotter.

I tried to ascertain what the revolcados on the breakfast menu are but neither of the crew members nor another customer were able to explain it; I didn't ask if the machacado and lengua are even available and since I seldom go out for breakfast it will be sometime before I get there for breakfast but I will stop at this truck again.

Edit 2/7/10: I came across this explanation of suadero or rose meat... "is a cut of beef... or couple related cuts of beef (depends on the butcher you talk to)... that involves the areas adjacent to brisket & belly... its a tough cut of meat that is usually brined or pickled before a long, slow cooking then finished up on the griddle." The authority goes on to compare it to corned beef and said that since it is pink, like pork, this may be where the name rose meat comes from.

Recently I went back to Tacoocho to try it again.


This time the suadero was not nearly as tender but the cabeza was awesome.

While there, I spotted another truck across Post Oak and went over to check it out. Taqueria Salmanca has mollejas and machitos on the menu also and they were able to serve the mollejas. What I got was not as good as Tacambero behind Canino's but was good nonetheless.
Posted by Bruce at 10:19 PM