Recently a small group decided to have a little get together to taste and compare some barbecue offerings from various places. We decided to have it on the Saturday after Thanksgiving so that Airon, who grew up in Houston but now lives in Dallas, would be able to attend. At one time there were going to be 6 of us plus a little one but illness and other appointments left us with just 3 adults, Howard of Houston, Airon and myself, plus one little one.

We knew that we wanted to include Boogie's, a trailer on W. Bellfort that several of us are very high on, and hoped to include Pierson's, widely thought of by many as the best in town right now. The holiday weekend, however, found several of our best known and most notable barbecue joints closed, including Pierson's, Thelma's and Virgie's.

We had read good things about Galvan's Sausage House on 90A in Richmond and Pizzitola's, which has won best in the city from the Press in the past, was also open, so those were our choices. We purposely wanted to keep the group small and the number of vendors at no more than four. We wanted to sample the trinity - sliced brisket, ribs and sausage - from each.

We gathered at a public park on the Southwest side, about equidistant from Pizzitola's and Galvan's but very close to Boogie's, for our feast.

After much fretting over the details for days one important item went unmentioned and Howard was the only one who thought to show up with a pencil and some paper to take notes about our judgments so what I have to say at this point is rather general. My brain and stomach were quite busy dealing with such a protein overload and I've been having trouble remembering the details of our observations; hopefully Howard and Air will add their comments here or if they post on their own sites, I'll link to those discussions. 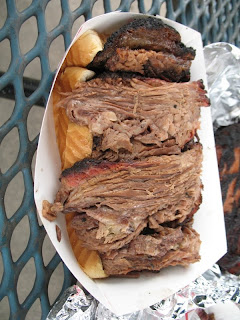 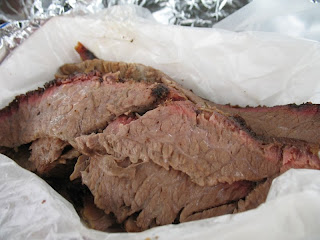 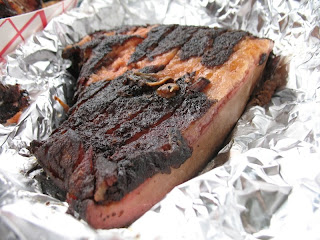 The clear winner was Boogie's, moist and tender with good smoke flavor (pecan and oak) and rub plus bark. Second place in my opinion went to Pizzitola's and I think the other's concurred; it was less tender and juicy but had good smoke flavor (hickory); the rub and bark were a little lacking. Galvan's suffered from having been dispensed from a steam table which had ruined the bark, making it pasty; it was the least tender of the three and had the least interesting rub and smoke profile (pecan and oak, again). All three, however, were judged better than any of the chain outlets in Houston. 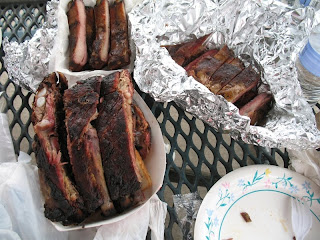 Despite all the shutter clicking that went on I do not have any good close-ups of the three rib entries so these wide shots will have to suffice. The picture tells the story, no? Once again Boogie's was the clear winner, although I thought the ribs were just a bit too loose on the bone; I've had better ribs from Boogie's. Both Pizzitola's and Galvan's served St. Louis style with the rib tips removed, which is much less appealing to me. The overall rankings were the same as for the brisket. Pizzitola cooks over direct heat, leaving the ribs a little dry for my taste and they weren't tender enough. Galvan's were even drier and less tender. 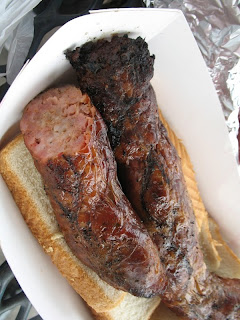 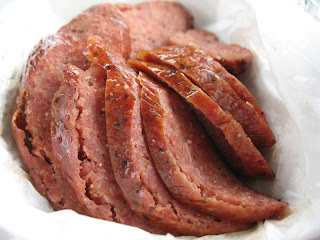 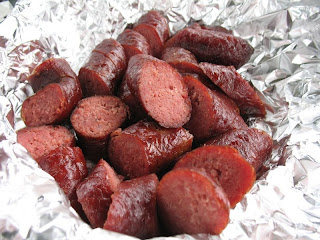 Galvan's sausage, their own creation, beef 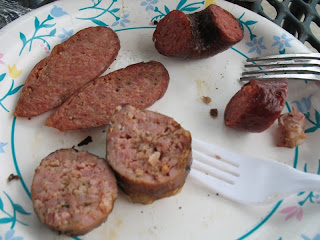 I am a sausage-aholic and something of an advocate for Texas sausage makers; I love the coarse grind, smoked sausages that Texas sausage makers specialize in and I love Boogie's creation, made from their own recipe. The more I've had it, the more I've become convinced it's their best offering (they also do a very good boudin which they make themselves). It may well belong in my Top Five of Texas smoked sausages, a group that also would include Louis Mueller's in Taylor, Austin's in Eagle Lake, Black's in Lockhart and City Market in Luling. That bias was only confirmed by this comparison; I've been a fan of the sausage at Pizzitola's ever since I first tasted it and it's very good, but Boogie's very clearly outshines it. This was the general consensus of our group as I recall.

Overall, Boogie's was the clear winner, followed by Pizzitola's, then Galvan's as I recall our conclusions. As stated with regard to the brisket above, however, we all would choose any of these places over any of the chains in Houston.

A note: I don't know why the pictures of Boogie's brisket and sausage above got arrayed vertically; that's not the way they appear on my computer. I'll try to correct that.

We all three are card-carrying members of the Good-Texas-Barbecue-Don't-Need-No-Sauce League but we did sample the sauces from all three places. I don't care at all for either Boogie's or Galvan's, too dark and bold, overpowering the meats in my opinion. I did find the thinner, simpler, less bold sauce from Pizzitola's more to my liking, should I ever want to add sauce to some of this cue.

After noshing and chatting for a couple of hours, then dividing up the scant left-overs (there was very little of Boogie's sausage left), Howard and I made a little trek down to Boogie's to tell them our findings and to ask a burning question that has been bugging both of us since we first learned Boogie's is going to be moving to a brick-and-mortar operation: what will the cooking arrangement be? Will the wood-fired smoker inside that little trailer be abandoned and a gas-fired cooker used????? Inquiring and worried minds wanted to know.

We met with Carlos, one of the operators of Boogie's, who is originally from the north side of Houston and has been cooking for 38 years, complimented him on his wares and advised him of our findings, then popped the question. The answer was a great relief: a pit for the new location is being custom built right now and will be exclusively wood-fired, no gas.

The city has given it's okay for the new location and the trailer will be moved in the next couple of weeks to 8035 W. Airport, # 115, in a strip center that includes a car wash. Operations will continue with limited hours and days of service out of the trailer for the time being from the new location while the building itself is fitted out.
Posted by Bruce at 10:47 PM

If you're up in the area of Taylor on a Friday or Saturday, take a little jaunt up north to Granger. There's a small grocery store to the right of 95 at the main intersection for the city. They make their own sausage, a nice coarse grind.

I've not found anything I like better, but I've probably not been widely exposed to anything other than Granger sausage.

I will leave some detailed comments once I find my sheet of paper and decode my chicken scratch.

Thanks, Scott. Always glad to hear of another Texas sausage maker and that's a new one for me.