I noted the first two of these on my survey of Beechnut mobil vendors. I passed the list on to Ziggy Smogdust and he hit the unit at La Roche and was really pleased with what he got. I've since been to the La Roche and Club Creek locations.

I had noted the menu of the La Roche location included cesina and chivo but what Ziggy discovered on the menu also was buche which is new to both of us. Buche is either pig's esophagus or pig's small intestine, considered a type of carnitas because of the preparation method. Ziggy had a beautiful picture posted on the other blog showing the carmelization of the exterior.


I got a ton of cilantro on my tacos and although I didn't get as good a picture as Ziggy I enjoyed the buche just as much. This was the most delicately flavored carnitas I've ever had and I was an instant fan. The chivo also was excellent, not at all gamey although the salsa was on the cusp of gaminess. I couldn't wait to try both of these types of tacos again. 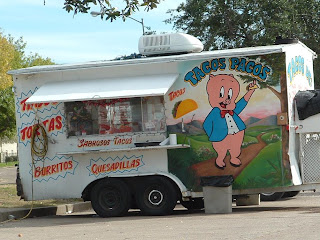 On my second visit I tried the Club Creek location. This unit sits next to a bottled water kiosk and is not quite as down at the heels as the other location.


The menu here lists birria instead of chivo and adds camaron to the list but I didn't notice the birria before I ordered and I got buche and tripas. As the picture reveals there was virtually no carmelization of the buche and it wasn't nearly as spectacular; the tripas was medium crispy with a little charring on some pieces. The salsa, in a dispenser on the counter along the side of the wagon, looked good and fresh and there were also pickled vegetables to help yourself to.

Since learning what buche is and experiencing it I've noticed it on other taco truck menus too and will have to be trying it elsewhere. It is not on the menu of the Harwin location of Tacos Pacos.
Posted by Bruce at 9:26 PM

It's getting close to lunch! These tacos look terrific. I honestly have a soft spot in my heart for taco trucks just like this. I find they have some of the best tacos.

I just ate three tacos from their location on Beechnut near 59. They were the first truck I saw open at around 1am Sunday night. I got two barbacoa and one al pastor.

The corn tortillas were very soft and pillowy. The pastor was forgettable. It was mild and tender and that's about it. But the barbacoa were fantastic. Great beefy flavor, very moist, generously seasoned. Dunked into their watery green salsa with avocado pieces in it, they were great.