This is another in my exciting ongoing series 'Cruising for Street Food on the Southwest side.' I've been making notes about these units whenever and wherever I come across them and just decided to pull them all together and put them out there in case others are interested.

This time I drove Harwin from Hillcroft out to Highway 6; four of the seven units I found were between Fondren and Gessner:

Tacos El Ranchero @ Forney, 1 block w. of Hillcroft - this one was doing a very brisk business at 12:45pm in this neighborhood where there are numerous Indo/Pak eateries and others; I noticed lengua and tripas on the menu.

Tacos y Tortas - a tiny wagon at 8000 Harwin, between Fondren and Gessner; no menu, no customers at about 1pm

La Fogata Mexican Kitchen, @ Allday, in the driveway of a Fuel Depot station - small hut on wheels, this one has been there a long time.

Tacos Pacos - @ Allday, this is another unit of the ones I noted on Beechnut and Club Creek earlier. Ziggy Smogdust checked one of those out and I've checked them out too and will post a review soon. This appears to be a real find. Like the ones mentioned on the other list, this one has buche and tripas but no goat on the menu. 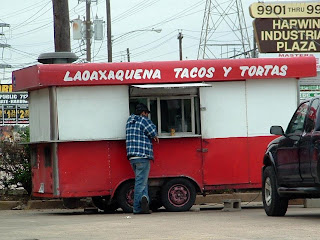 I stopped at this one several months ago because of the name. There is no menu posted anywhere and very little English was comprehended. I inquired about any Oaxacan specialties and was directed to try their Chicken Special. 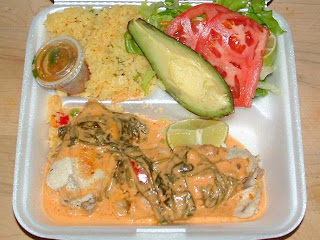 This proved to be a delicious meal except that the chicken breast meat itself was as dry and tough as leather. The rolled, stuffed chicken breasts were kept in foil on the edge of the griddle; to prepare the plate, they were unwrapped and reheated on the grill, then presented. The stuffing included carrots, potatoes, and ground beef and a portion of a bay leaf. The sauce was excellent; I presume it to be a Oaxacan mole but one I'm not familiar with and I couldn't begin to guess the ingredients, nor could I identify the green or herb in the sauce. This was one of those meals I could have plated up at home to make much more appealing and it would have been an excellent meal had not the breast meat been so dry.

Ricos Tacos Mobil - a blue truck at Boone in a convenience store parking lot. Noted tripitas, lengua on the menu. A sign on side says www.roadstergrill.com - that's the Greek/burger place at @ Bellaire and Bissonnet???

Taquitos Jacala - 66 station parking lot @ West Houston Center Blvd. I was going the wrong way, the traffic was heavy and there was no place to pull over so I didn't get a look at the menu.


Note: Some units move regularly; these lists are often out-dated within a few days of being published. It has prove to be impossible to keep them updated.
Posted by Bruce at 3:39 PM