A Couple of Pupuserias

This has been recommended to me several times on this blog and I finally got around to trying it recently, during the height of our heat wave when I hardly ever was going out. The interior of the low-slung building is very homey and time worn. It shares a rather cramped and uneven parking lot with a machine shop or auto garage or similar business. I sat where I could catch a glimpse of the lady in the kitchen, slapping the pupusa back and forth; I've only been able to witness that before at El Cuscatleco and it's a treat. I had the place to myself at about 1:30 in the afternoon and ordered a Tamal de Elote and Pupusa Revuelta.


I remember the first time I tried a tamal de elote thinking 'What the..., there's nothing in here,' but I've come to love them (corn is one of my favorite vegetables anyway) and this was a very good one with a very generous dollop of Crema Salvadorena.

This pupusa revuelta had perhaps more pork than any I've had and was very good; I particularly liked the charring. Another blogger has bragged on how un-greasy the pupusas here are and I found that to be true although this was too hot to pick up at first and by the time it cooled off enough to handle the bottom had gotten soggy and the filling broke through. This was a very good pupusa but I don't mind the greasier ones I've had.

This pupuseria keeps its curtido more or less at room temp as many do and it had fermented just a bit. Combined with the loroco that can make for a rather unpleasant taste to me; this one wasn't bad but I prefer a well chilled, crisp curtido.

Oh yes, I had a big glass of lemonade. I don't think it was fresh squeezed but it sure did hit the spot on that blistering, brutally hot day. The menu is rather small and they did not have a copy to go but I noted Bandeja Paisa, the Colombian combo plate, Carne Guisada, Ropa Vieja, Chile Relleno, and Tacos Alegres. The sign out front says Comida Salvadorena y Latino America.

I stopped in at this place for the first time today; it has been open about 6 months and is doing a good business. It's a very large, banquet hall-sized room.

The meal was preceded by chips (store bought I think, Doritos?) with a warm salsa; I've never had chips and salsa at a Salvadoran place before. The coffee came with a carafe for refills. I've never had that before either and it was a pretty good, basic coffee.

The steamed tamal had a cake-like texture; it was not very warm but good nonetheless. The crema had a pinkish tinge to it but I couldn't decide what the flavoring was; it had a whipped texture and was very good and there was a generous amount. 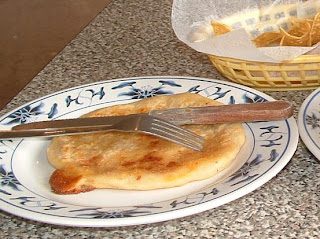 The pupusa was very thin and very big and seemed to include some yellow cheese, which is unusual. I could taste some pork flavoring but I'm not sure I ever encountered any actual shreds of meat. The pupusa tasted more like an American grilled cheese sandwich than any pupusa I've ever had, not that there's anything wrong with that.


The chicken sandwich was very good. A hollowed out, toasted bolillo with mayo and/or crema, curtido, chunks of tender, braised, seasoned chicken breast (a generous amount), with thick tomato, cucumber and radish slices. Despite being a very wet filling the bottom of the roll never gave way and the only drawback was the charred portion of the bread. Alas my picture doesn't show any of the chicken.

I had wanted to order the Empanada de Plantano, according to the menu a deep fried plantain puff stuffed with custard cream, but they weren't able to serve it so I went for the sandwich, which is on the appetizer menu, and I wound up with way too much to eat. I've had Salvadoran empanadas before and wouldn't have described them as puffs so I'm interested in going back to try this. What I've had were deep fried portions of plantain with a thick dairy filling which has been described to me as a milk cream.

The curtido was in a large jar on the tables and was very vinegary but you got a pasta fork to retrieve a portion with and could let it drain; mine was still pretty crisp. You can see the prongs of the pasta fork sticking up behind the sandwich in case anybody wondered what that is.

The service was very blah but I was able to coax both the waitress and the cashier into a smile.

I liked both of these pupuserias and likely will return to both. La Rica is just blocks from my home.
Posted by Bruce at 6:39 PM